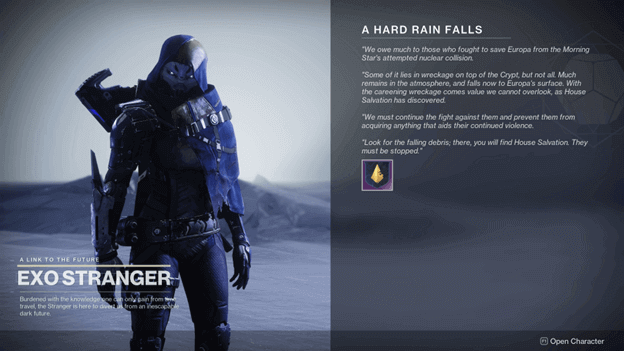 The Exo Stranger believes that it is vital to prevent the Fallen from acquiring anything that aids their continued violence.

She speaks of how you can find the House of Salvation by looking for signs of falling debris to find out where they are.

It is in this mission that you must put your efforts into disrupting their activities by taking out the House of Salvation in Eclipsed Zones.

How to Get A Hard Rain Falls Quest?

A Hard Rain Falls can be obtained by going to Exo stranger and speaking with her, you will find the quest amongst the other ones that she offers. 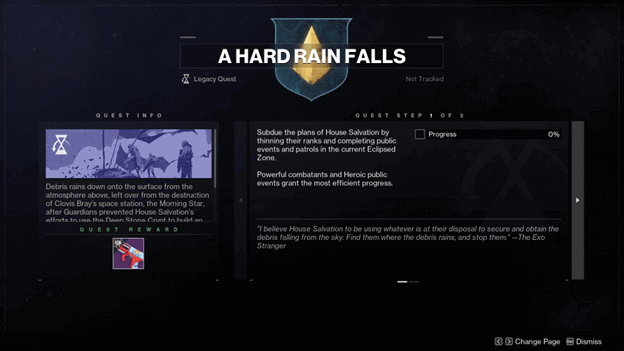 The House of Salvation has been active and there is always activity going on involving them, you will need to put a stop to their plans.

To do this, you will have to look for the Eclipsed Zone (usually Eventide Ruins) and defeat enemies in the area.

Defeating Powerful combatants and joining in on Heroic public events as they provide efficient progress, allowing you to complete the objective sooner.

Step 2: Report Your Success and Findings to the Exo Stranger

After putting a huge dent in the House of Salvation, you will need to head back to the Exo Stranger and will be able to complete the quest.

Once you have completed the first objective, you can complete the quest by speaking to the Exo Stranger and she will reward you with the High Albedo Legendary Sidearm. 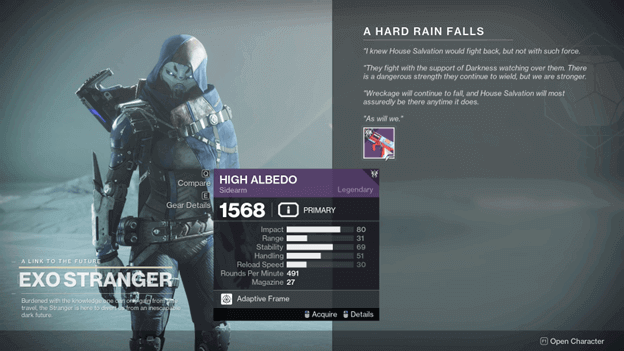 You have successfully disrupted the House of Salvation’s activities and although this won’t put a permanent stop to them, it still made a difference.

The Exo Stranger did not think that House Salvation would fight back with such force, but luckily you were able to handle them.