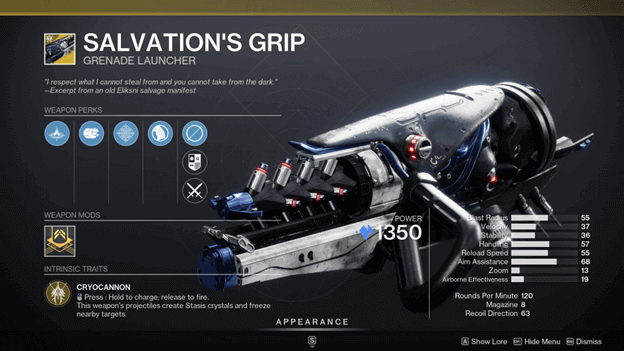 “I respect what I cannot steal from and you cannot take from the dark.” -Excerpt from an old Eliksni salvage manifest

Salvation’s Grip is an Exotic Grenade Launcher that was originally an experiment of the Fallen to merge Stasis into a weapon.

It fires projectiles that create a Stasis crystal which is capable of freezing enemies, disabling them, and making them easier targets.

Aside from being able to deal a lot of damage, the weapon’s capability to freeze enemies can make it easy to take out multiple targets.

How To Get Salvation’s Grip? 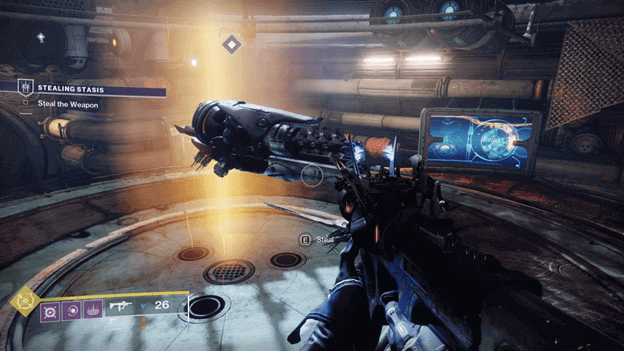 Salvation’s Grip is a weapon that you steal during the Stealing Stasis mission, which becomes available during a quest called The Stasis Prototype.

During the Stealing Stasis mission, you will need to infiltrate the Fallen city to search for and steal Salvation’s Grip from the Fallen.

The Salvation’s Grip’s magazine has reduced weight for faster reloads.

Salvation’s Grip has a grip made from lighter material.

Hold the fire button to charge and release it to fire, which will allow Salvation’s Grip to create Stasis crystals and freeze nearby targets.

This makes it easy to disable enemies in an area for you to defeat them easily using continuous fire or other weapons.

Currently, Salvation’s Grip does not have a catalyst and it is uncertain whether one will be added in any future updates.

Obtaining Salvation’s Grip is not very hard, and you simply need to complete The Stasis Prototype quest’s mission and you get to keep the weapon.

Its ability to freeze enemies makes it a very decent weapon when it comes to taking out multiple enemies, leaving any survivors frozen and most enemies dead.

Combining attacks from Salvation’s Grip with that of other weapons can help save ammo and you can mostly use it as a means to disable stronger enemies.