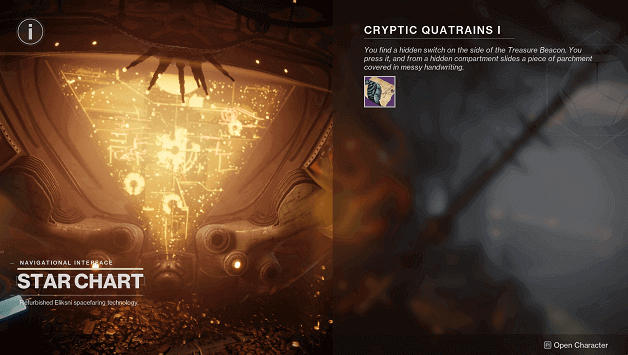 In the Star Chart, there is a rank reward that can be obtained which gives you the Cryptic Quatrains 1 quest, which is the Small Treasure Beacon.

The Small Treasure Beacon is labeled as a Small Eliksni Beacon and appears to contain a piece of parchment from an unknown being.

This item will put you on a hunt following riddles to find a hidden treasure buried in the past by whoever had written it.

How To Get Cryptic Quatrains 1?

How to Solve Cryptic Quatrains 1 Riddle?

The Cryptic Quatrains 1 riddle is solved by observing the text written in the form of a riddle, which has words highlighted when you view the quest.

Putting together the highlighted words will provide you with a clue as to what your next step will be and usually where to go or what to do. 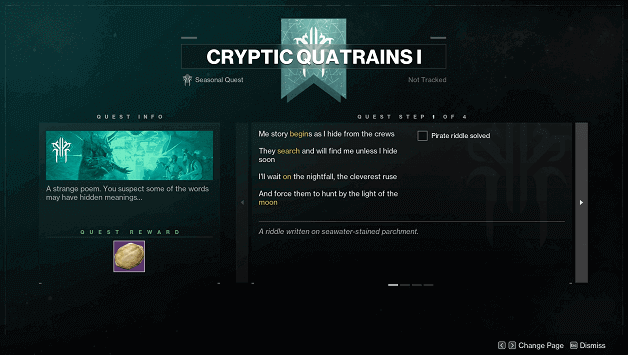 The first puzzle in Cryptic Quatrains I reads:

“Me story begins as I hide from the crews

They search and will find me unless I hide soon

I’ll wait on the nightfall, the cleverest ruse

And force them to hunt by the light of the moon”

The clues read out the following: Begin Search Moon

This is a hint that you should begin your search on the moon.

The Second puzzle in Cryptic Quatrains I reads:

“Behind in the harbor, their sorrow was real

They lost what I’d taken, me heart filled with fear

From cruel revelation the dawn would reveal:

A chest broke and barren, and me nowhere near”

The clues read out the following: Harbor Sorrow Lost Revelation

These indicate that you should go to Sorrow’s Harbor and enter the lost sector K1 Revelation to open the chest at the end.

“My eyes toward the cosmos, I let out a sob

I begged to the gods and the fallen alike

By bullet or saber, I’d fall to the mob

But please, let me deal them a palpable strike”

The clues read out the following: Cosmo Fallen Saber Strike

The puzzle hints that you should head to the Cosmodrome and complete the Fallen S.A.B.E.R. Strike. 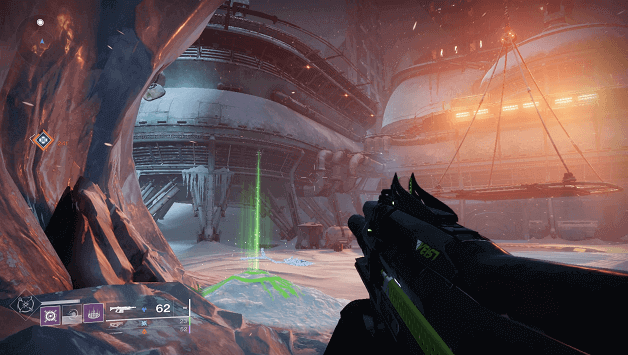 The fourth puzzle in Cryptic Quatrains I reads:

“The winds of Europa were frozen and white

And even the tides had been stopped by the cold

The hook would swing empty, I’d not die tonight

By cranes they’d be searchin’, but I’d keep me gold”

The clues read out the following: Europa Even Tides Cranes Searchin’ Hook Cranes

It is hinted in this clue that you need to go to Europa and search the Eventide Ruins for treasure under a hook near the cranes.

After digging up the treasure in the Eventide Ruins, the quest will be completed, and you will be rewarded with the following: 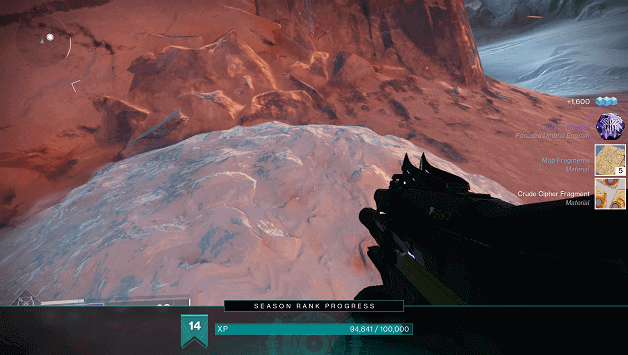 It appears whoever buried this treasure was hiding from the crews who were searching for him until he reached the Moon, eventually escaping to Europa.

The stranger had run to the Eventide Ruins and decided to hide their treasure under an area that he considered hooks and cranes to mark.

You have successfully obtained a Crude Cipher Fragment along with other seasonal loot from digging up this hidden treasure.