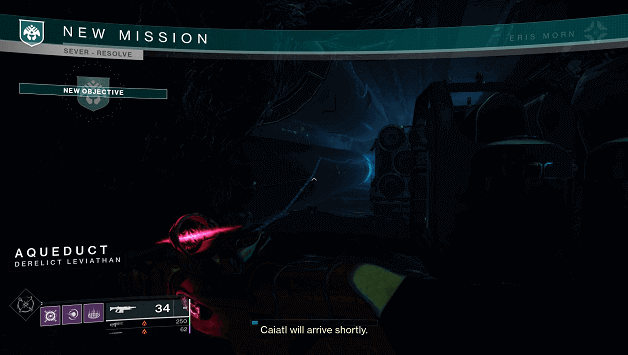 Empress Caiatl was not prepared the last time she faced Ghaul but this time, she has been bound to the Crown of Sorrow and is ready.

Together, the two of you will both work this time to sever the last connection that Calus has latched to the Lunar Pyramid.

This time Caiatl is eager to do her part and work as a team, unlike the last time, hopefully, it turns out successful now.

How To Get Sever Resolve Mission? 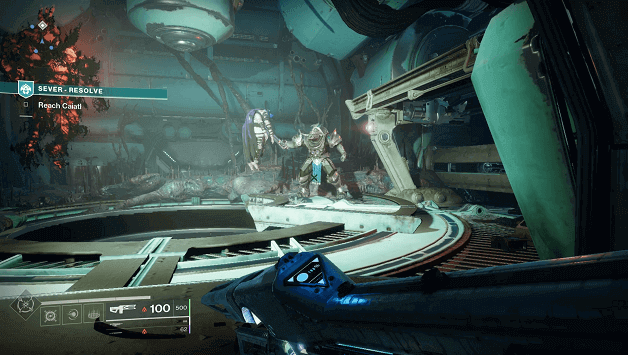 1) Clear a Route to the Leviathan’s Engines

This time around, you were the first to arrive on the Leviathan and Caiatl plans to meet you shortly after you start moving.

Just like in the previous Sever mission, you will need to fight your way past the enemies swarming your path until you reach the pit that leads to the Engineering Bay.

Once again the Engineering Bay will be filled with enemies and you will have to press the attack and fight your way to clear them all.

Bracus Lume and Val Parthus (Coalition Allies) will once again be there to fight alongside you as you push through the Engineering Bay.

Progress will rise as you kill enemies and defeating the last one will reach 100%, allowing you to progress to the next objective afterward.

Now that Caiatl has been bound, the Ritual Amplifier should be of good use and you will need to plant it nearby where the waypoint is marked.

After planting the Ritual Amplifier, head through the door and you will see Caiatl with an enemy impaled on her sword.

There will be a dialogue between Caiatl and the Nightmare of Ghaul, you will need to proceed down the pit once more into the Engine Room.

The Engine Room will need the same steps you did during the Sever-Rage mission, requiring that you incinerate the Unrelenting Nightmare once more.

Head to the very right when you enter the room and destroy the glowing power source at the top to open up the doors and go through them.

Once you are through the doors, interact with the console to unseal the Immolation Hall and make your way back.

You should run into the Unrelenting Nightmare this time and will need to lure him into the Immolation Hall to be incinerated.

From where you first entered, the path to the Immolation Hall will be to the left where you find a large room and will make another left to reach the hall.

The Unrelenting Nightmare will be chasing you and you will need to jump up to the console to ignite the Immolation Chamber, incinerating it in the process.

Head back to where you first entered and interact with the nearby console that prompts you to Release Containment Lockdown so you can get out of the room.

The turbines will be off now and you will be able to proceed to make your way to Caiatl who will be waiting for you to start the ritual.

6) Defeat the Nightmare of Dominus Ghaul

Caiatl will have a short dialogue with the Nightmare of Dominus Ghaul but you can start making your way to the boss fight area.

Once the boss enters the area, start attacking him with everything you have to deal as much damage as possible while there are no other enemies. 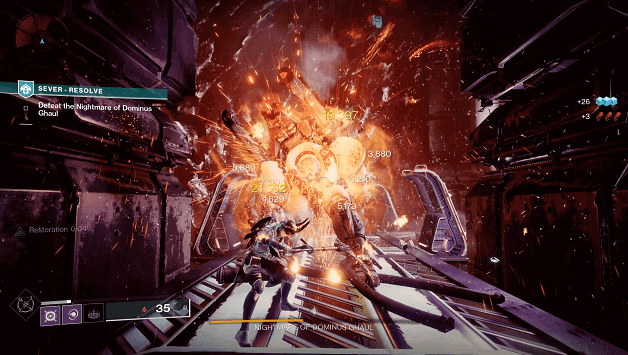 You will need to deal damage to the boss while taking on the enemies that spawn in the area and there will be no pauses or times where enemies are not present, you have to multitask.

Continue pursuing the Nightmare of Dominus Ghaul while fighting your way through the enemies until you defeat him.

Once you have defeated the Nightmare of Dominus Ghaul, head back to Caiatl and the mission will end as their dialogue begins.

Completing the Sever-Resolve mission will allow you to progress to quest step 44 and further after during the Bound in Sorrow Seasonal Quest. At the end of the fight, there will be a Bound Chest available for you to open if you have Bound Presence which provides you with Season of the Haunted gear and Opulent Umbral Energy. 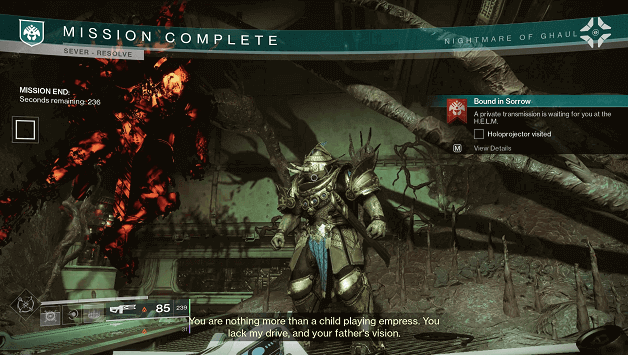 You and Caiatl have done it, the ritual has been completed and the last connection to the Lunar Pyramid has been severed.

Caiatl has been able to make peace with her mind and turned the Nightmare into a Memory, accepting the fact that her new ways of honor and peace are for the better.

Although things came out victorious, things do not seem to have changed and you will need to check with Eris Morn to see what she knows.