In Warframe, Daggers have not seen a lot of action by the likes of it. Users tend to often ignore them due to their base damage and with the choice of much stronger weapons.

I for one like to use a dagger or two every now and then not just for the assassin-like look but also for the benefits that some dagger may give in missions.

For those that use daggers they understand what can be done with them, especially with a planned out build.

When used and modded correctly, the daggers in Warframe can surprise you in many ways you would never have imagined.

Here are best 10 Daggers in Warframe: 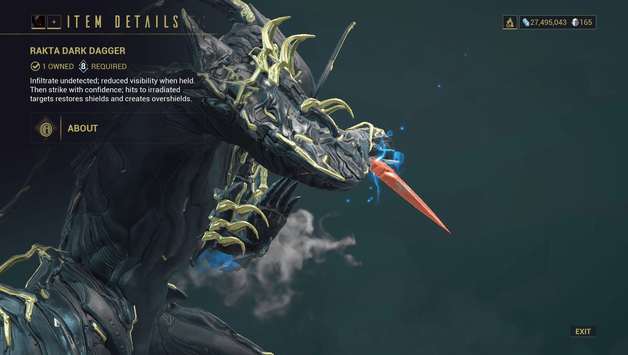 A personal favorite of mine, the Rakta Dark Dagger is the Rakta Variant of the Dark Dagger which can be purchased from Red Veil for standing.

The Rakta Dark Dagger has the unique ability of rendering its holder to be less likely to be sighted by enemies as it reduces their vision allowing a stealthier approach when required In-game.

Another unique passive of this magnificent dagger is its ability to grant shields and overshield while striking an enemy that is affected by the radiation status effect.

Now that means the more times you shield per hit and per enemy hit!

Imagine if you could deal very quick hits, charging enemies on and instead of you taking damage, you instead keep increasing in shields, well that’s what this dagger can do.

The Rakta Dark Dagger mainly deals radiation damage only and has a very fast attack speed. 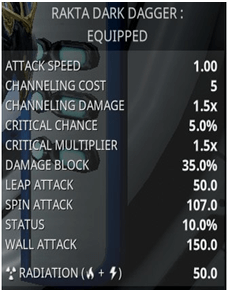 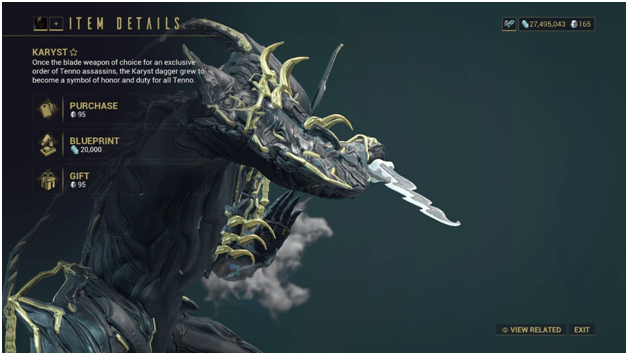 It is tied with Rakta Dark Dagger with the same amount of damage however its element is toxin.

This weapon has a decent critical chance and a good status chance, along with its speed, it should be quite useful in the hands of anyone. 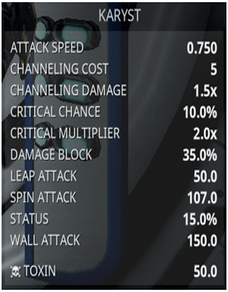 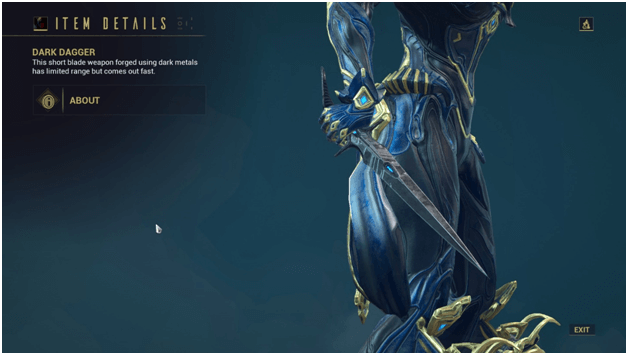 The Dark Dagger is the regular dagger and not as much compared to its counterpart, however it still does have some pretty decent stats.

The radiation damage alone can be a huge advantage depending on which type of enemy you are fighting against and the base attack speed of the weapon allow several hits which means more chances to cause critical or status effects.

This weapon deals only radiation damage which makes it useful for dealing status effects on enemies but can also utilize critical builds. 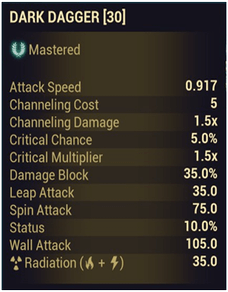 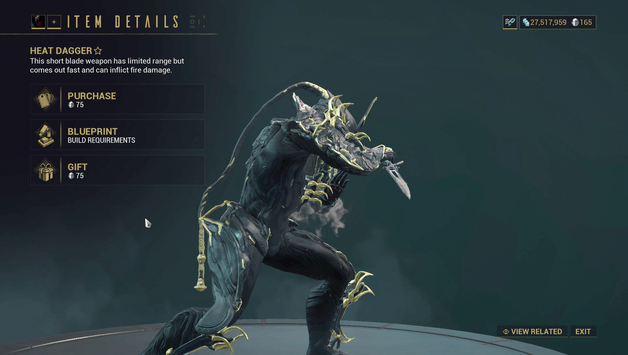 The heat dagger mainly gets its name by its special passive, which is that its slam attack creates a blast of fire around the user, instead of the normal slam attack.

This deals heat damage and can cause enemies to burn and take damage over time.

For a dagger, the Heat Dagger has a decent amount of damage and along with its special attack it can become very situational when in certain missions. 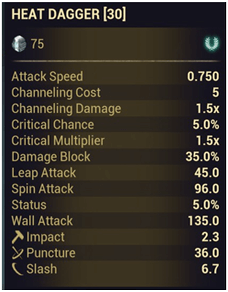 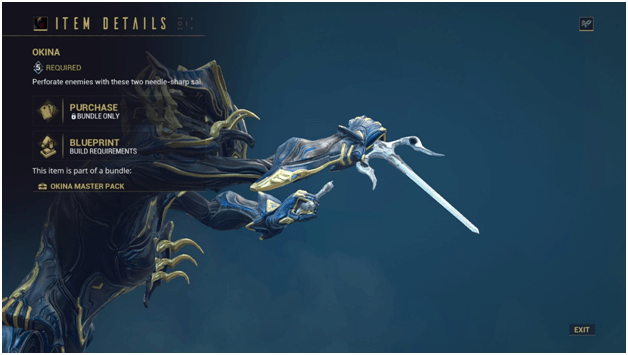 This pair of daggers is suitable for those who like to do fasts attacks as it has a very high attack speed decent amount of puncture and slash damage.

Regardless of its low critical chance, this weapon has good capabilities due to its base attack speed which basically guarantees a fair bit of critical damage.

This weapon also has a moderate amount of status chance and can be useful if modded with elemental damage. 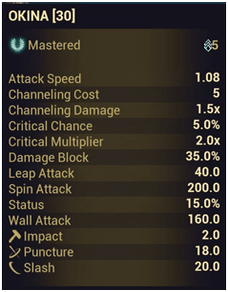 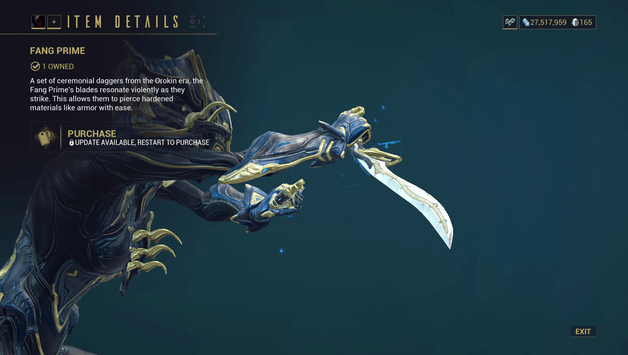 A more traditional looking pair of daggers, the Fang Prime deals a good amount of puncture damage and has a good spin attack damage.

This is currently the only Prime dagger type weapon there is in the game.

With its fast attack speed, the Fang Prime can easily build up a combo meter and benefit from critical mods regardless of its low critical chance. 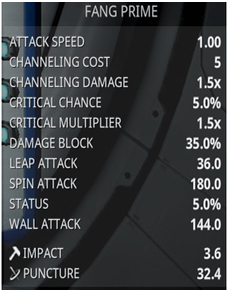 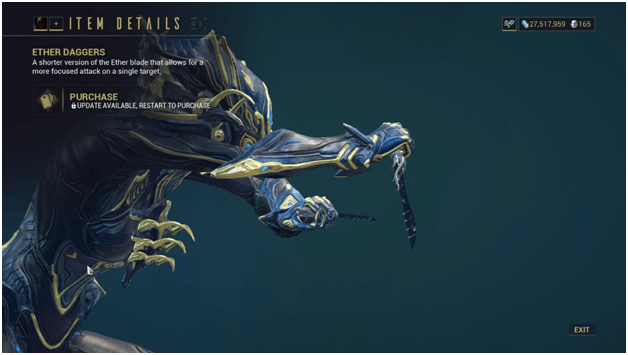 Rewarded by completed the Stolen Dreams quest or by purchase from Nakak, the Ether Daggers are a set of daggers that resemble the Ether Sword.

This pair of weapons has not only a decent base slash damage but it also sports a high damage spin attack which can be utilized by different builds.

Ether Daggers mainly deals slash damage and has a small amount of impact and puncture damage. 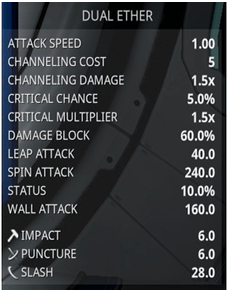 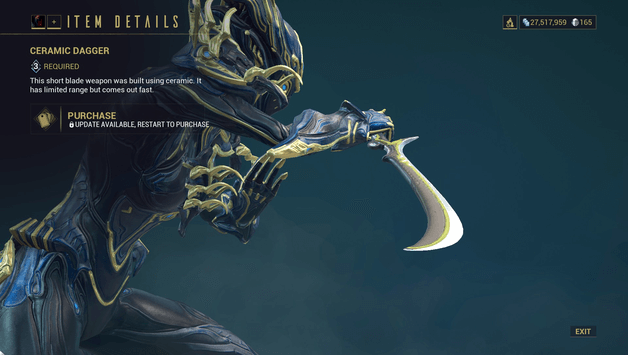 This is one of the daggers that many players wanted to acquire due to its high attack speed but little anyone know that when this weapon is equipped it has a bonus feature.

During the lunging strikes by the Ceramic Dagger, a fourth strike will cause the user to dash forward and cause enemies to suffer from bleed damage.

If the dash lands against an unalarmed enemy, the user initiates a stealth kill. 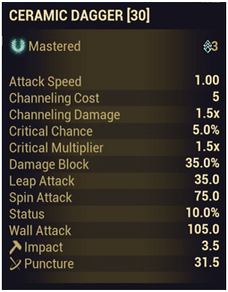 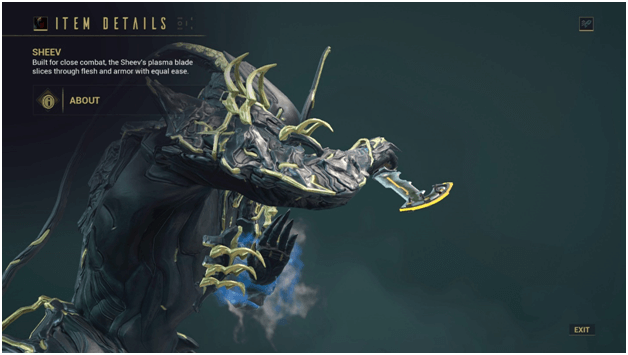 Seemingly one of the hardest daggers to get due to the lack of availability rather than the difficulty of obtaining it.

This weapon requires you to build it using all its different parts before you can even see it in your links in the chat.

Although it has a slow attack speed, the Sheev gives a good status chance which can become very handle when modded with planning.

Just like the Heat Dagger, Sheev also causes an explosion of fire upon slam attacks. 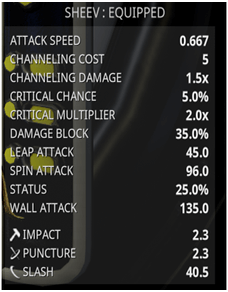 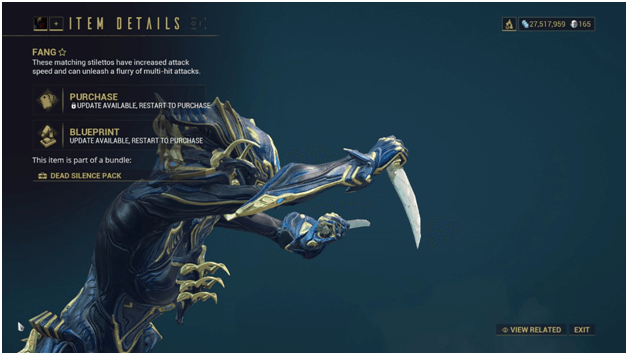 The Fang although sought to be one of the less used weapons being it the weaker variant from Fang Prime and its lack of any special attributes can still be used when modded.

With a good amount of attack speed and a moderate amount of damage, Fang can be a good starter weapon for those with limited choices. 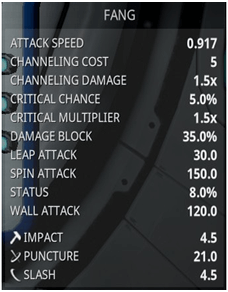 Do check out all the weapon builds here

Now I know a lot of people would not agree with the fact that daggers can be useful, well that’s incorrect.

First of all, we have some daggers with special mod and one of these special mods is the Covert Lethality mod which causes any finisher attack to instantly kill an enemy.

Now this can work with both enemies that are unalarmed or enemies you stun, burn or put to sleep and more.

There is more than just one simple mod though and exploring the different ones will make it worth your while.