Sentinels are a type of companion that can go with the Tenno on their missions, providing assistance and helping them in several different ways.

I tend to use more than one sentinel depending on what mission I am going on or what enemies I will be facing as most of them have different uses and at times they become very situational.

Most Sentinels come with their own weapons and have specific mods for them to use aside from the mods the owner can equip them with.

A lot of us use sentinels mainly to easily collect items via the Vacuum mod when other companions had no similar mod to allow this but choosing which Sentinel based on its abilities that will be right for the mission can mean a lot when aiming for a successful mission.

Here are some of the best and most useful Sentinels in Warframe: 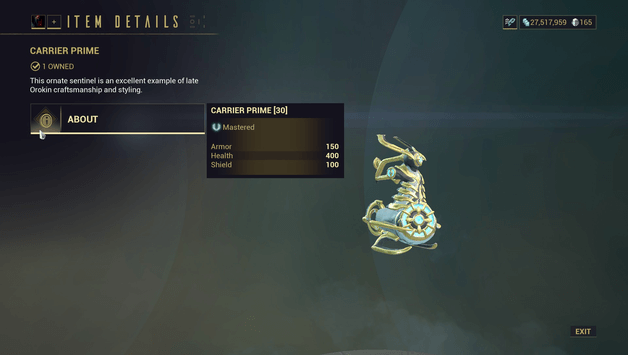 Carrier Prime is no doubt one of the most useful Sentinels due to its survivability alone since it is not easily killed and its ability to keep replenishing the ammo of its user.

During boss fights or hunts, the Carrier Prime a great choice for you if you rely on weapons little ammo reserves.

The Carrier Prime uses the Sweeper Primer, which is the Prime Variant of the Sweeper, a close range shotgun for the Carrier.

Looter – Causes the Carrier Prime to destroy nearby containers 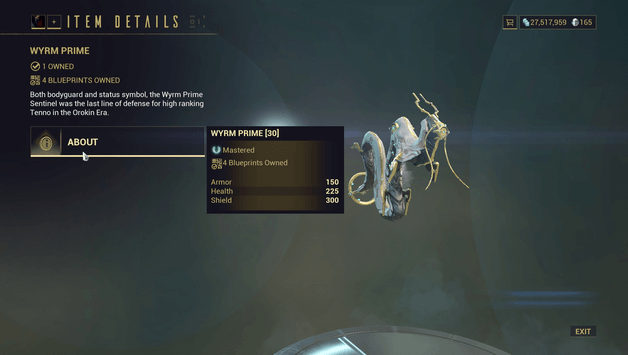 The Wyrm Prime is an offensive Sentinel and focuses on attacking enemies first and dealing crowd control to support its owner.

It is useful when going up against groups of enemies and can stun them in a large radius as well as protect its owner from status effects that may be caused. 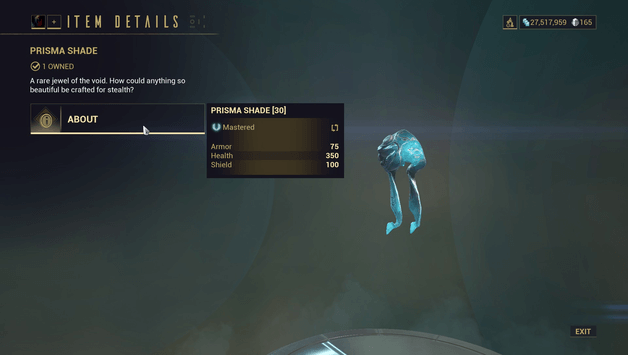 The Prisma Shade is a stealth Sentinel which is capable of causing its user to be invisible and will protect them if they are attacked.

This is useful when undergoing stealth missions or trying to acquire affinity using stealth methods.

Its main weapon is the Prisma Burst Laser which is a burst-fire weapon and Prisma version of its counterparts normal one.

Ambush – Increases the damage of its owner when the invisibility from Ghost has been broken. 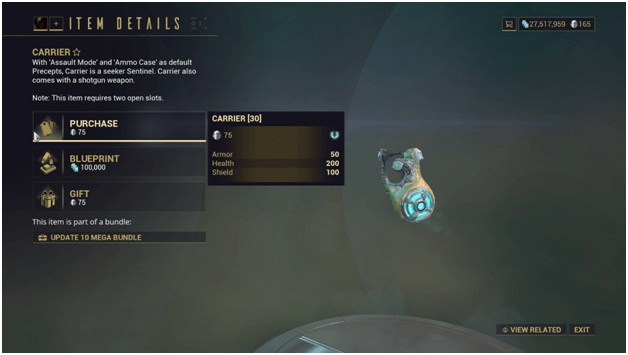 Similar to the Carrier Prime, the Carrier comes up first on the Sentinels without variants as it is still considered a very useful Sentinel and a must have for many players.

Just like its Prime Variant, the Carrier can increase its owner’s ammo and convert others into the current weapon ammo.

The Carrier uses the Sweeper, similar to its Prime version except with smaller stats.

The exclusive mods that can be used by the Carrier are the same with its Prime counterpart. 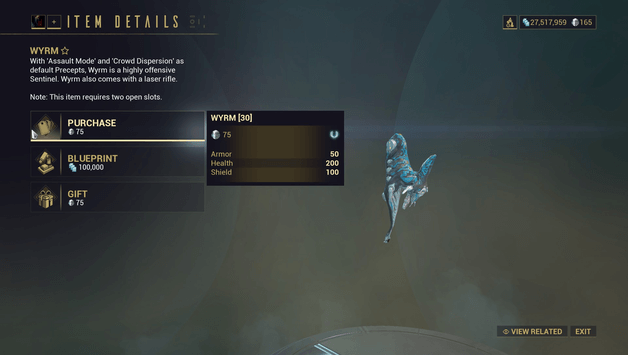 Just like its Prime variant, Wyrm has the same uses and gets it spot being very useful and topping other Sentinels due to its usefulness in combat and it being a last resort for those who cannot farm for Wyrm Prime.

Similar to its Prime variant, Wyrm is useful for crowd control and damage during missions and can be utilized in such a manner that its user would not have so many hindrances against groups of enemies.

The Wyrm uses the Laser Rifle, similar to the Wyrm Prime’s weapons except with lower stats on it.

Wyrm uses the same mods as its Prime variant and has the same effects. 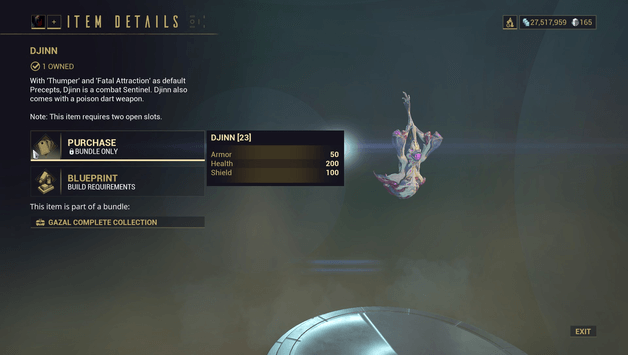 The Djinn is more of a Sentinel that likes to trick the enemies of its owners causing them to harmlessly move near to be attacked all of a sudden by this sentinel.

This Sentinel can resurrect itself after a period of time if it has been killed, provided it has the correct mod installed.

Its main weapon is the Stinger, it fires out poisonous projectiles which deal toxin damage to enemies.

Reawaken – Allows the Djinn to resurrect itself after a period of time. 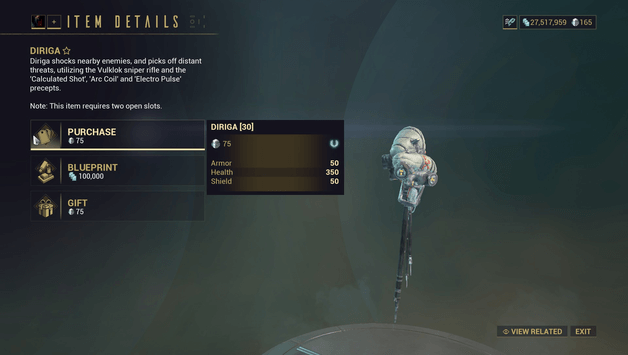 The Diriga is both a support and offensive Sentinel capable of eliminating threats from afar or doing crowd control to enemies that get too close.

Main damage done by this Sentinel is electricity, meaning its main weapon and its abilities deal electricity damage.

Its main weapon is the Vulklok, a weapon similar to a sniper rifle that deal electricity damage.

Arc Coil – Shocks multiple enemies that are nearby one another. 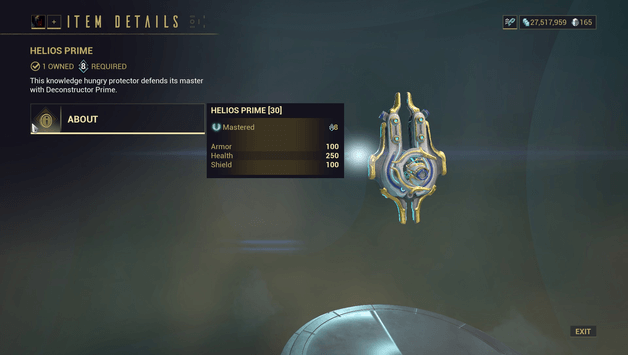 Helios Prime is the Prime Variant of Helios, a Sentinel focused on scanning enemies for valuable data and to identify their weaknesses.

This Sentinel attacks with a melee glaive-like weapon instead of a normal projectile firing weapon and mainly focuses on being a Sentinel that was made for scanning enemies.

It uses the de-constructor Prime, a melee weapon that does impact damage and has a high status chance.

Detect Vulnerability – Allows the user to see enemy weak points as long as they have completed research/scans about them. 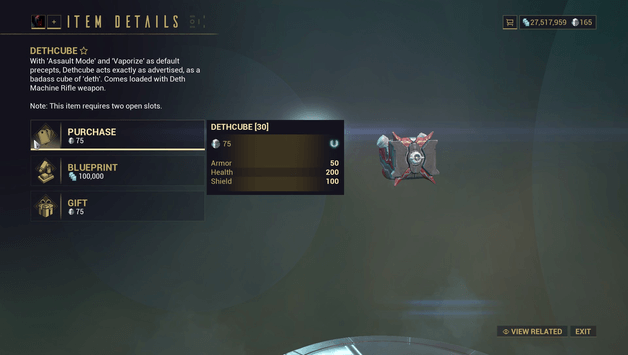 The Dethcube Sentinel may appear as a cute little box that may seem harmful, but it actually sustains a high amount of damage and it supports those Warframes that need energy.

This Sentinel will attack any enemies it sees and will deal great damage to enemies that get too near.

Using its main weapon, Deth Machine Rifle, this sentinel is capable of unleashing a barrage of bullets on the enemy of its user.

Energy Generator – Drops energy orbs after killing or assisting in a kill. 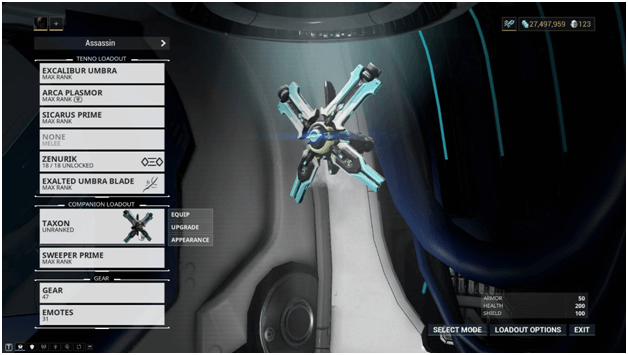 The Taxon is one of the earlier Sentinels that you get in the game and does a good job protecting its new users when starting out within the game.

Capable of generating shields by dealing damage to enemies, the Taxon goes for a good support and damage Sentinel and can make a good difference in the early game.

Its main weapon is the Artax, which fires a beam at enemies dealing cold damage and slowing enemies.

There are a bunch of Sentinels that we can use but all of them have their own special abilities that can be obtained by equipping the respective mod.

We need to keep in mind that each of them have their own purpose and by choosing the correct one, we may use this to an advantage.

It may take some time to collect some of the Sentinels, but having them around at your desire but later on these prove very useful and can be used for a multitude of situations that are not just for picking up items but using their special features as well.