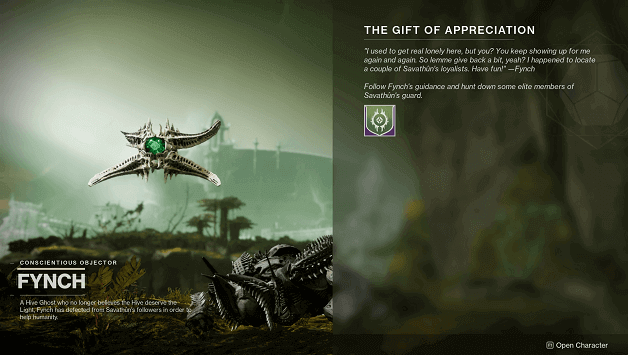 With Savathun out of the picture and The Throne World going into disarray, the Scorn has been trying to take over.

Fynch sees this as an opportunity to hit two birds with one stone as you can take advantage of the Scorn and Hive fighting each other.

How To Get The Gift Of Appreciation?

The Gift of Appreciation quest can be obtained after you have completed the Trust Goes Both Ways quest from Fynch on The Throne World.

The Gift of Appreciation Quest Steps 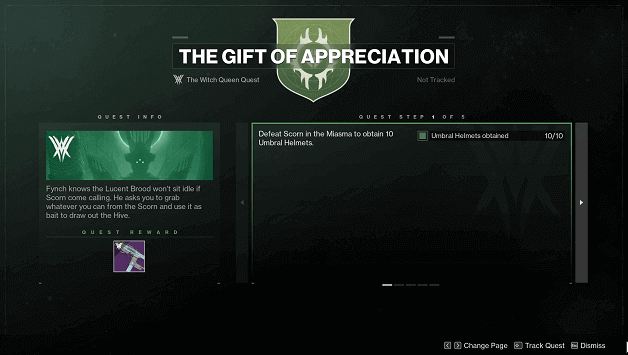 Step 1: Defeat Scorn in the Misamsa to obtain 10 Umbral Helmets

To lure out the Lucent Brood Lightbearers, Fynch has devised a plan that requires you to collect Umbral Helmets to, later on, be used as bait. You will have to collect these from fallen Scorn enemies that can mainly be found in The Miasma.

Go to The Miasma and defeat Scorn enemies who will drop Umbral Helmets upon death, these will be collected after they are killed and do not require being picked up. You will need 10 Umbral Helmets in total.

Since Fynch is aware that the Hive enemies you will be drawing out will put up a hard fight, later on, he believes you should be prepared. There are stockpiles around the Throne World which he has located and believes they provide you with an advantage.

You need to go around the Throne World and collect all 9 Region Chests (which are marked on the map) to proceed.

Step 3: Defeat Lucent Brood and Complete a Public Event in the Florescent Canal

Fynch wants you to start causing some mayhem to rile up the Hive Lightbearers. He has asked you to go out and defeat Hive enemies wherever you can find them. You will need to stir up trouble in the Florescent Canal.

Travel to the Florescent Canal and defeat 100 Lucent Brood (Hive) enemies and complete 1 Public Event. Doing the Public Event first will allow you to defeat several enemies and speed up this step.

The Hive Lightbearers should now be aware of your presence and the trouble that you have been causing, making it easy to lure them out. You can now head to Queen’s Bailey and use the Scorn Helmets as bait to draw them out. Once the Lightbearers are out, you will need to defeat them as well as crush their ghosts to make sure they don’t come back.

Head over to Queen’s Bailey and place the Umbral Helmets on the marked area to use as bait for the Lightbearers. You will need to defeat the 3 Lightbearers that appear and destroy their ghosts.

You have dealt a big blow towards the Lucent Brood and Fynch is happy about this, especially since he can play his part during the fight. He wants you to return so that he can reward you for your efforts.

Return and speak to Fynch at Quagmire. (The Throne World)

The Gift of Appreciation Rewards

As the final step before completing The Gift of Appreciation, you will be able to collect the Forensic Nightmare (Legendary Submachine Gun) as a reward from Fynch. 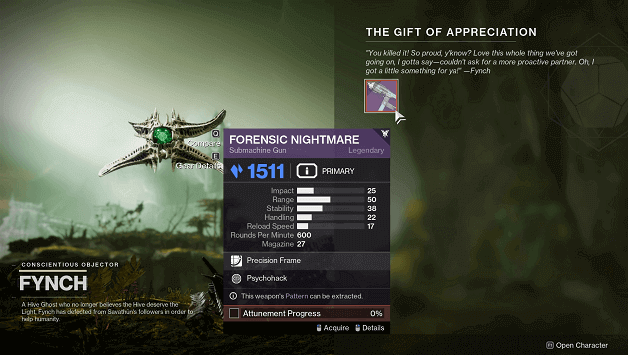 With Savathun out of the way, the Lucent Brood still runs around holding most of The Throne World, and dealing a large blow like this will put them in place.

Fynch is glad to have been a part of keeping enemies suppressed and hopes that these enemies will not be able to seize power anytime soon.

Once again Fynch is grateful that you teamed up with him and sees you as a great partner, believing that both of you accomplish a lot together.