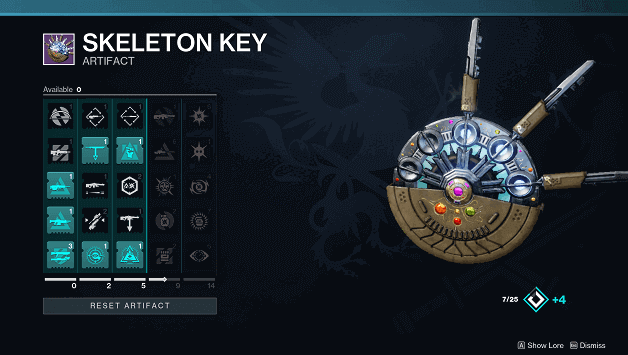 With the arrival of Season of Plunder, a new artifact with unique traits was introduced to players which are known as the Skeleton Key.

As players start during Season of Plunder, this artifact is found as the Guardian assists in recovering Spider who was precious cargo at the time.

Thankful for the Guardian’s help, Spider allowed them to continue using his ship known as a Ketch and let them keep and use the Skeleton Key to open doors their enemies would close.

How To Get Skeleton Key Artifact?

During the start of Season of Plunder, players who first log into the game (with access to the DLC) will be tossed into the Salvage and Salvation mission.

It is here that they learn more about what is going on and afterward can rescue Spider who then allows them to keep the Skeleton Key for their use.

The Skeleton Key will then be an important tool used by the Guardians as they unlock treasures and discover more secrets during Season of Plunder.

How To Level Up Skeleton Key?

The Skeleton Key gains XP just as you would and will occasionally gain levels, allowing you to assign points to one of its many artifacts unlocks.

A good way to quickly level up the Skeleton Key would be to participate in activities that can provide a lot of experience as well as gain a higher rank for bonus XP gains.

Equipping your Ghost with XP boosting mods will also prove useful to further increase the XP gain for the Season of Plunder artifact. 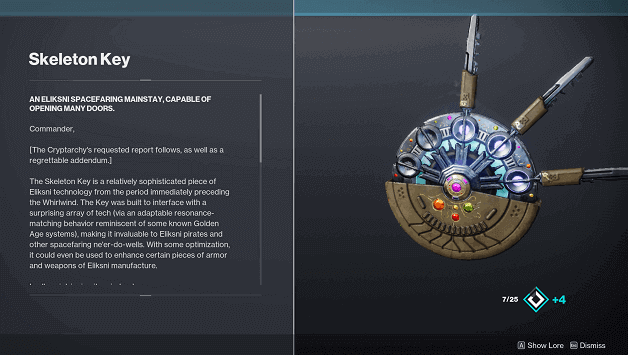 “AN ELIKSNI SPACEFARMING MAINSTAY, CAPABLE OF OPENING MANY DOORS.

[The Cryptarchy’s requested report follows, as well as a regrettable addendum.]

The Skeleton Key is a relatively sophisticated piece of Eliksni technology from the period immediately preceding the Whirlwind. The Key was built to interface with a surprising array of tech (via an adaptable resonance-matching behavior reminiscent of some known Golden Age systems), making it invaluable to Eliksni Pirates and other spacefaring ne’er-do-wells. With some optimization, it could even be used to enhance certain pieces of armor and weapons of Eliksni manufacture.

In all, an intriguing item indeed.

Now I Would be remiss if I did not mention that this report would have been completed sooner had there not been repeated interference from a certain individual to whom I shall refer only as “Mr. D_.”

The item in question was repeatedly removed from secure Vanguard premises by Mr.D-,who was later witnessed using the Skeleton Key to interface with several mechanisms in the Annex, including a discontinued power generator, a deciphering core and several appliances used in the preparation of food.

When confronted, Mr.D- replied that he wished to “goose [them]” and showed no interest in following the proper channels for access to restricted Cryptarchy technology.

When I later personally brought Mr. D- the first sheaf of the necessary paperwork, he reacted with a series of gestures that are considered obscene across three different cultures.

I was rudely instructed to “take it easy,” referred to as his “brother,” plied with various illicit refreshments, and when I rebuffed all attempts to placate me, he suggested we “settle this in Gambit”-an invitation I vehemently declined.

Needless to say, I will be filing another complaint against Mr. D- with Ikora once she has restored my access to the grievance systems.

Although the Drifter seemed to have tampered with the Skeleton Key for his weird uses, it is still intact and provides the Guardian with bonuses they need and unlocks things for them.

The Season of Plunder has a keen focus on the new Arc 3.0 system which is shown by many of the artifact mods.

Leveling up the Skeleton Key and making use of the mods it has will allow you to become very strong and make more use of not only the Arc 3.0 system but also Arc weapons.