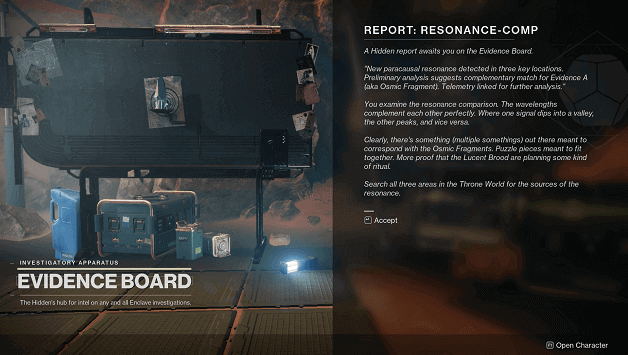 The Hidden has provided new intel which leads to the discovery of instances of complementary resonance in the Throne World.

You will need to investigate this and see where you are led as this may lead to another Osmic Fragment that you can collect.

This must be dealt with carefully as the Lucent Brood may be aware of your trespassing and may try to stop you.

How To Get The Report: Resonance-Comp Quest?

The Report: Resonance-Comp quest is obtainable from the Evidence Board at the Enclave on Mars and is the first of the available reports. 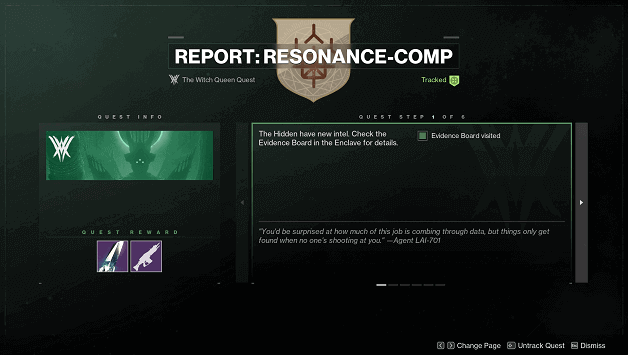 The very first step is to obtain the intel that The Hidden has provided and you will first do so by heading to the Evidence Board and interacting with it.

Step 2: Search All 3 Locations For Sources of the Resonance

There will be 3 locations where the sources of resonance are located which are Quagmire, Miasma, and Florescent Canal.

Each of these locations will have a waypoint that shows where the source of the resonance is and you will need to interact with the objects marked to scan them.

Once you have scanned the objects, enemies will appear behind you to attack you and you must fight your way through them to each next location.

Step 3: Follow the New Resonance to Witch’s Echo to Collect Another Osmic Fragment

Another Osmic Fragment has to be located and you will need to head to the area to collect it but this won’t be easy as enemies will be waiting for you.

Once you reach Witch’s Echo, clear out the enemies and head for the Osmic Fragment so that you can collect it.

After clearing out the enemies, you will find the Osmic Fragment behind a wall and can pick it up by interacting with it.

Step 5: Report Your Findings On the Evidence Board in the Enclave

Once you have obtained the Osmic Fragment, head back to the Enclave on Mars and interact with the Evidence Board to turn in your findings.

This will alter the appearance of the Evidence Board, showing your report, showing pictures placed above an Osmic Fragment.

Step 6: Review the Case on the Evidence Board in the Enclave

After you have turned in your report, you can complete the quest by interacting with the Evidence Board and accepting the reward.

This will complete the quest and allow you to proceed with other Report Quests afterward.

One of the main rewards of completing the Report: Resonance-Comp Quest will be an Osmic Fragment and along with it will be a legendary Throne World Weapon. 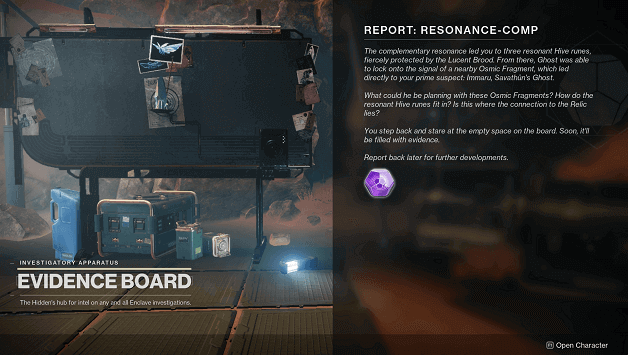 The complementary resonance that had been located by The Hidden has led you to three resonant Hive runes, which were protected by the Lucent Brood.

After visiting the resonant Hive runes, Ghost was able to lock onto the signal of a nearby Osmic Fragment which led you to Immaru, Savathun’s Ghost.

You may have collected an Osmic Fragment but it appears that even though Savathun had been defeated, her Ghost Immaru, may be planning something.