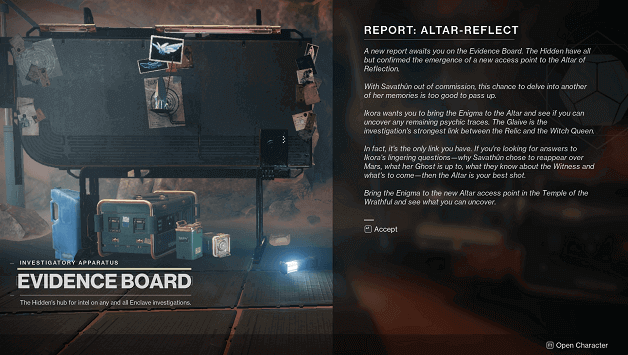 A new report from the Hidden has been placed on the Evidence board regarding the emergence of a new access point to the Altar of Reflection.

Since Savathun is out of the picture, this will give you a chance to delve deeper into her memories without any hindrances.

Ikora has assigned you to take the Enigma to the Altar of Reflection and see what can be uncovered by looking into any memories.

How To Get The Report: Altar-Reflect Quest?

You may obtain the Report: Altar-Reflect quest from the Evidence Board at the Enclave on Mars after you have completed the Report: Resonance-Comp quest. 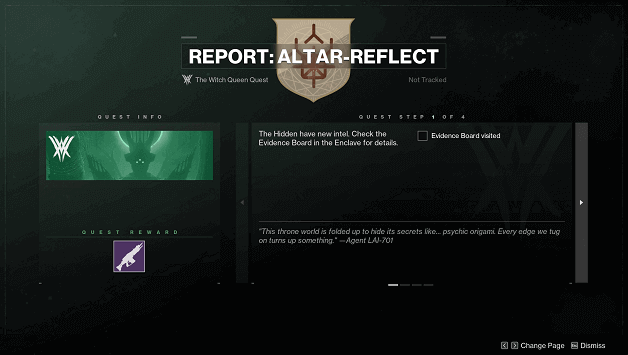 After accepting the Report: Altar-Reflect quest, you will need to interact with the Evidence Board to check out the intel from The Hidden.

Your next task will be to find the New Altar of Reflection and to bring the Enigma to the new access point located there.

This will be in the Temple of the Wrathful on a similar path to the previous Altar of Reflection but with a slight detour.

As you make your way towards the Altar of Reflection’s old location, there will be a path to the left which leads to the new access point.

You will need to use Deepsight at the marked location to view the hidden runes of The Witch Queen and will have to solve this puzzle. 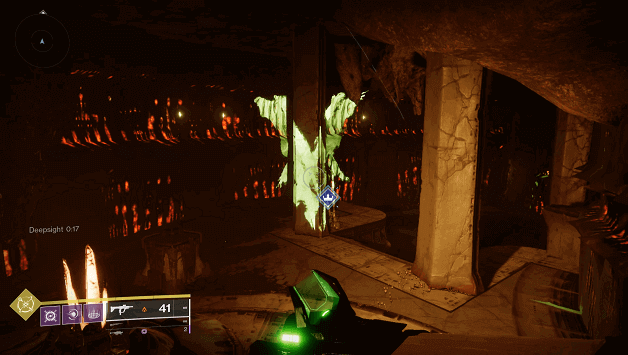 To proceed, you need to move to the corner of the room so that the glowing runes will align to form The Witch Queen’s symbol. (Jumping may also help)

Once you have aligned the runes, a portal will open and you will need to enter it to begin the New Adventure Mission. (Altar of Reflection: Catalyst)

Quest Step 3: Report Your Findings To The Evidence Board

After completing the New Adventure mission, you will need to head back to the Evidence Board at the Enclave on Mars to turn in your findings.

Quest Step 4: Review The Case on the Evidence Board

Once your finding has been turned in, interact with the Evidence Board again and you will be able to complete the quest and get a reward.

Completing the Report: Altar-Reflect quest will reward you with a drop from the Throne World Weapons table, providing you with a legendary weapon. 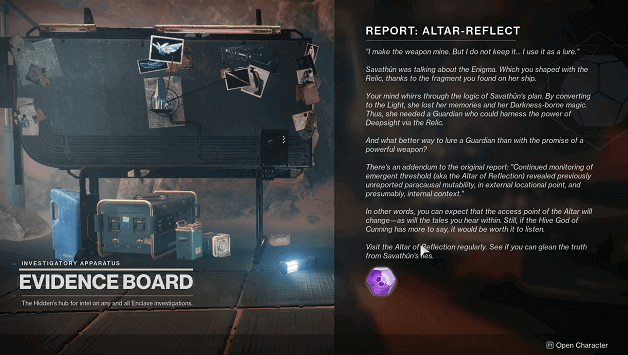 It seems that during the memory, Savathun was talking about a weapon being hers but using it as a lure at most.

She was talking about the Enigma, which happened to be what you had shaped previously with the Relic that you had found on her ship.

The Vanguard will need to be careful as there might be more to whatever plan Savathun may have had before she perished.