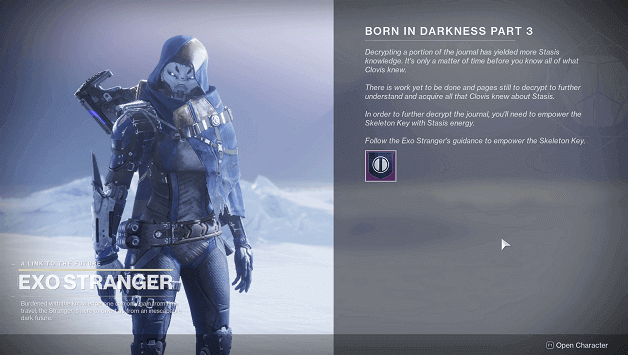 While Stasis knowledge has been learned, it is not sufficient enough to provide the Exo Stranger with the information she needs.

To change what she failed to do in the past, she will need your help to decrypt yet another portion of the journal.

It is in the Exo Stranger’s hopes that Ana Bray will be convinced of what good may come out to prevent a mistake from happening again. 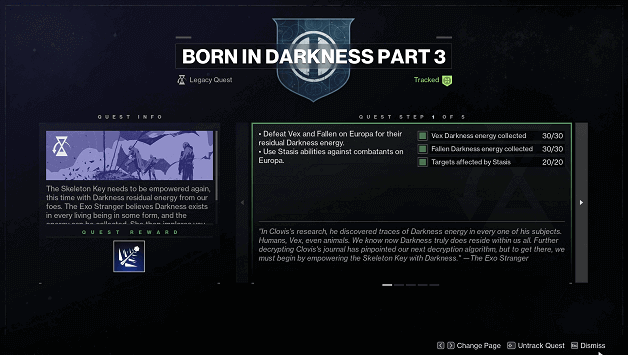 Step 1: Defeat Vex and Fallen on Europa and Use Stasis Abilities

To unlock another portion of the journal, you will once again need to begin empowering the Skeleton Key. To do this it is believed that power exists within a being in some form. This leads to the need to try defeating Vex and Fallen to be sure.

You will need to head over to Europa and find Vex and Fallen to defeat as well as affect enemies using Stasis abilities.

Now that you have begun to empower the Skeleton Key, another way to do so will be during Gambit matches. The enemies found in Gambit matches are known to be brimming with Darkness energy and the Exo Stranger pins this as your next goal.

You will need to complete Gambit matches with the Stasis subclass equipped and also deal Stasis final blows to combatants.

Step 3: Defeat Teraks’s Platoon Near the Crux of Darkness in Eternity

With the Skeleton Key almost ready, it is believed that to boost it once again, you will need to defeat the Salvation Elite Captain, Teraks. Only by doing this will the Skeleton Key have enough power to unlock the next portion of the journal.

You will need to head over to the Crux of Darkness in Eternity and locate Teraks and his platoon to clear them out.

Step 4: Bring The Skeleton Key To The Exo Stranger in the Concealed Void

The Skeleton Key is now fully empowered and now it is time for you to help the Exo Stranger unlock the next portion of the journal. She will be waiting for you in the Concealed Void, and along with her will be her sister Ana Bray.

Head over to the Concealed Void Lost Sector in Asterion Abyss and speak with the Exo Stranger.

Step 5: Regroup with the Exo Stranger in Beyond

After unlocking another portion of the journal, the Exo Stranger finally came clean to Ana Bray about the truth. Things didn’t go so well though but the Exo Stranger still has discovered more about Stasis and is ready to give you yet another Stasis-related gift.

It is time to head back to Beyond so you can speak with the Exo Stranger.

Once you have completed Born in Darkness Part 3, you will be rewarded with another Stasis Grenade from the Exo Stranger.

Additionally, the Born in Darkness Part 4 quest becomes unlocked after you have completed the quest. 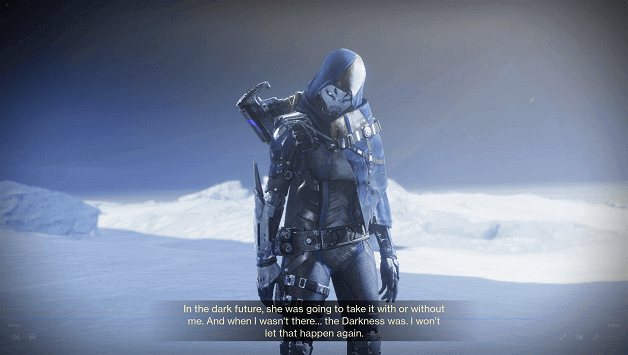 It seems that Ana Bray could not handle all of the truth that the Exo Stranger had to tell her and this could lead to a much darker path.

The Exo Stranger will be needing your help soon again to prevent Ana Bray from heading down a dangerous path of no return.

With more information unlocked, it is now known who created the Exo and altered the Darkness, making Clovis’s AI your next target.