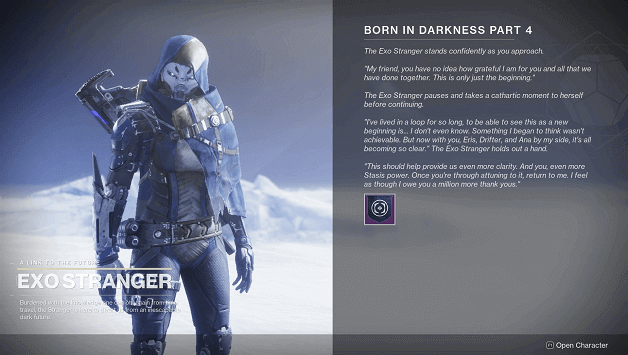 It is time to uncover the truth through Clovis’s journal and this time the Exo Stranger expects that Ana Bray will be around too.

To unlock another portion of the journal, you will need to once again empower the Skeleton Key to use on Clovis’s AI.

The Exo Stranger has already planned out the course of action you will need to take to proceed with the task. 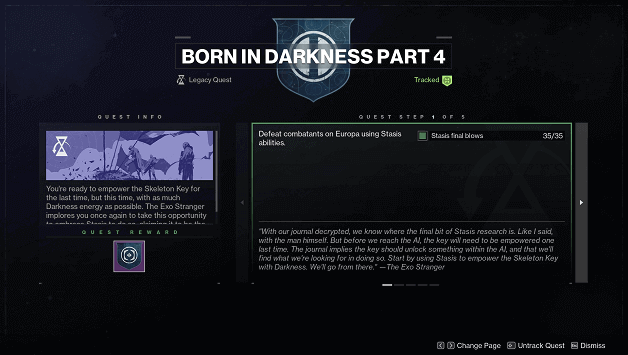 The Skeleton Key is once again ready for being empowered and to kick things off, you will need to defeat enemies on Europa using Stasis abilities. The Exo Stranger wants you to take this opportunity to quickly empower the Skeleton Key to move on.

Your task will be to deal final blows using Stasis to enemies.

Step 2: Complete Nightfall Strikes With Your Stasis Subclass Equipped and Use It against Enemies

To continue empowering the Skeleton Key, the Exo Stranger tells you that you need an immense amount of Darkness energy. To find this, you will need to seek out powerful combatants which can be encountered in Nightfall Strikes.

You will need to participate in Nightfall Strikes with the Stasis subclass equipped and use Stasis abilities to affect enemies.

Step 3: Defeat The House Salvation Fallen Platoon Near The Crux Of Darkness

Start making your way to the Crux of Darkness and clear out all the enemies in the area.

Step 4: Bring The Skeleton Key To The Exo Stranger in the Concealed Void

Go to the Exo Stranger who will be with Ana Bray in Creation and interact with Clovis’s AI to begin unlocking information.

Step 5: Regroup with the Exo Stranger in Beyond

More data has now been unlocked and the Exo Stranger has potent Stasis energy to give you. You will need to regroup back in Beyond to complete the quest and get your rewards.

Travel back to Beyond and speak with the Exo Stranger.

Completing Born in Darkness Part 4 will reward you with the Aspect of Destruction quest, which later on provides you with more potent Stasis energy. 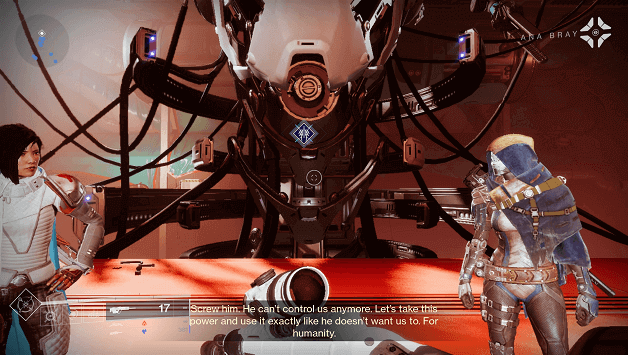 It seems Clovis did find a way to alter the Darkness but instead of wanting to share it with humanity, he only wanted to keep it for the Bray family.

The Exo Stranger and Ana Bray are disgusted with his beliefs and see that there was no more humanity left in the way he spoke.

Ana Bray claims its best to take the Darkness from Clovis and use it for what he does not want, to use it for humanity.