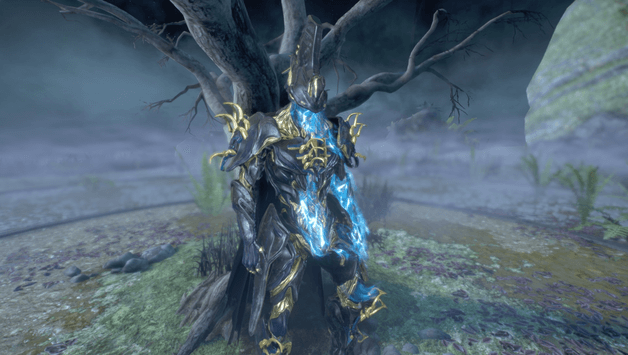 Revenant is an Eidolon based Warframe who appears to conjure the same energy that the Teralyst and its greater version have.

He is a unique Warframe capable of dealing tremendous amounts of damage to enemies while manipulating enemies to control them or replenish his needs. 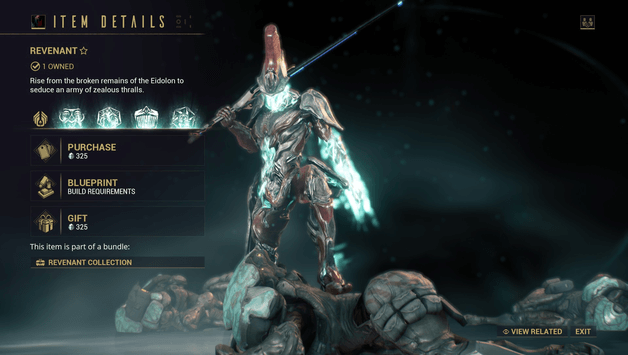 Revenant’s blueprint is a onetime reward given to you after you finish the “Mask of the Revenant” quest.

The blueprints for Revenant’s parts may be obtained by doing bounties from Cetus or The Plains Of Eidolon.

An already build version of Revenant may be purchased via the orbiter for 325 platinum. 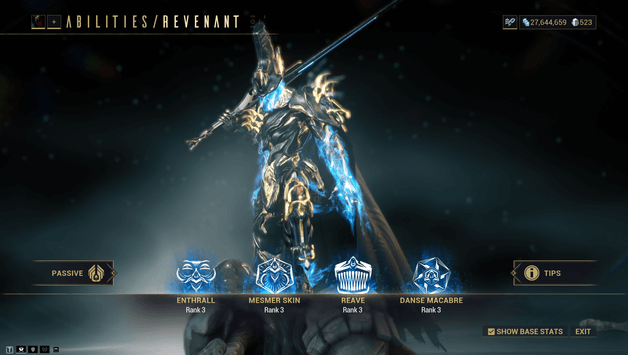 Revenant has the ability to force enemies to fight for him, protect himself with sentient energy, surge through enemies stealing their strength and unleashing chaos with his dance of death.

His passive ability allows him to be immune to certain attacks from the Teralyst, Gantulyst and Hydrolyst when using Mesmer Skin and is also immune to the magnetic damage from the waters at night in the Plains Of Eidolon.

When Revenant loses his shields, a blast emits from him, knocking enemies down. 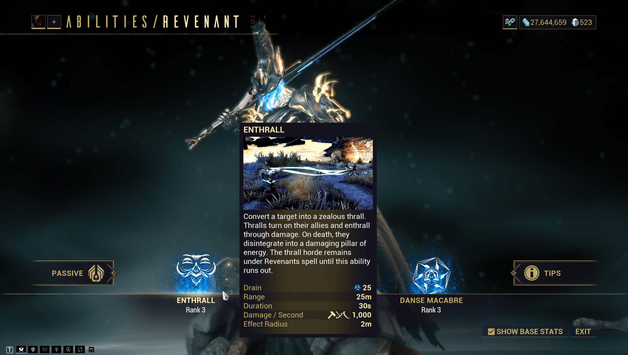 Revenant enthralls an enemy, causing them to fight for him by turning against its allies.

In the process of the enthralled enemy fighting its allies, it will also spread the enthrallment to other enemies adding a maximum of 7 thralls to fight for you.

These thralls are allowed to be damaged by Revenant and his team and upon death will leave behind a pillar of energy which deals damage to nearby enemies.

This ability is very useful and strategic to use as you may use the enemy to fight amongst themselves so you only need to deal with whoever is remaining.

Not only does this give the Revenant allies but he may also use this as means of dealing damage by using the energy pillars they leave behind for damage.

There will be no energy cost when Enthrall is used on an enemy stunned by the Mesmer Skin ability.

Using Reave on enthralls grants 5x more health and shields that are gained.

When Danse Macabre is used and kills thrall, a overshields pickup will drop and any energy pillars may be detonated when hit by Danse Macabre, dealing damage in the area. 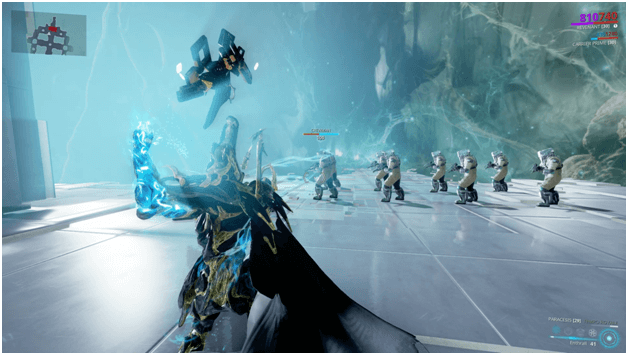 (Revenant casting Enthrall on an enemy) 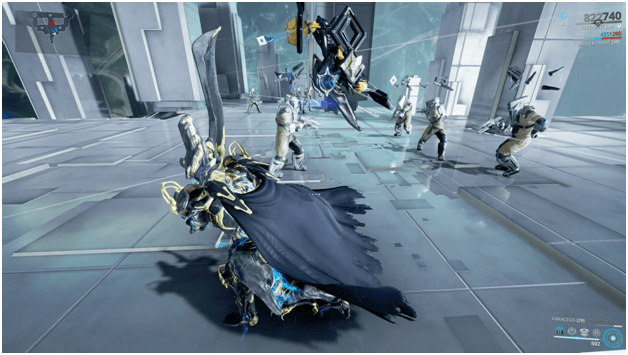 (Enthralled enemies fighting their allies and spreading the ability) 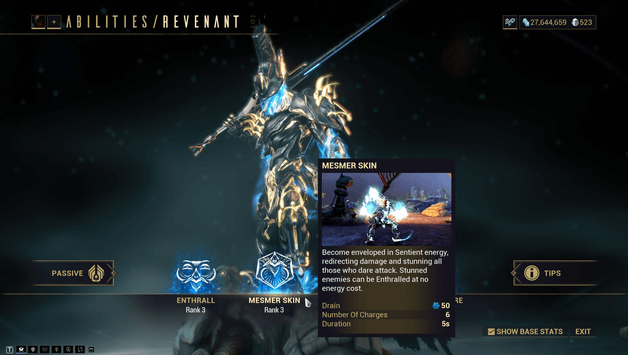 Revenant uses sentient energy to protect himself which blocks enemy attacks and stun any enemy that attempts to deal the attack.

The ability is considered a shield which completely blocks an attack and stuns the enemy, the amount of times it blocks is shown by charges.

While active, using Reave on an enemy that is enthralled will give the ability another charge.

This ability is useful for engaging multiple enemies or for ignoring damage that could be fatal to the user. 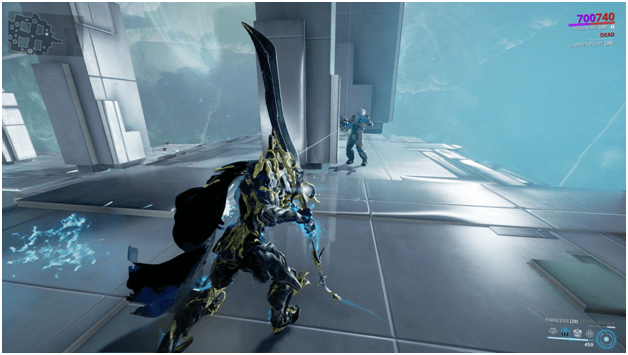 (Enemy getting stunned by Mesmer Skin) 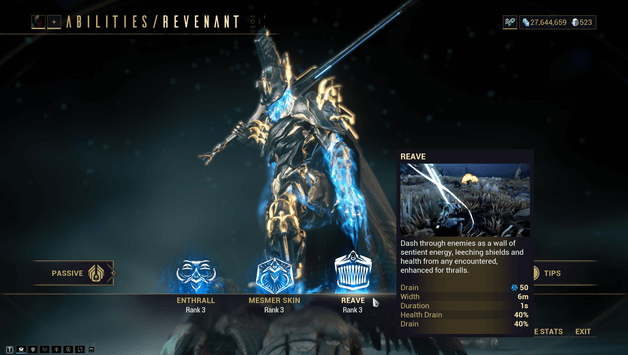 Revenant dashes through his enemies, stealing their shields and health and adding them to his own.

When enthralled enemies are hit, the amount that is leeched is multiplied granting even more for Revenant to steal.

Adds a charge to Mesmer Skin if an enthralled enemy is hit by Reave granting him another charge for the ability until used.

While Danse Macabre is active, Reave may be cast which will cause the dash to happen while ending with Danse Macabre still active with a bonus of only using up 50% of the energy cost.

This ability is great for replenishing both the health and shields of Revenant as well as damaging enemies and moving from one place to another.

Since Danse Macabre being activated makes Revenant move slightly lower, this ability can help move around as well as add to the damage. 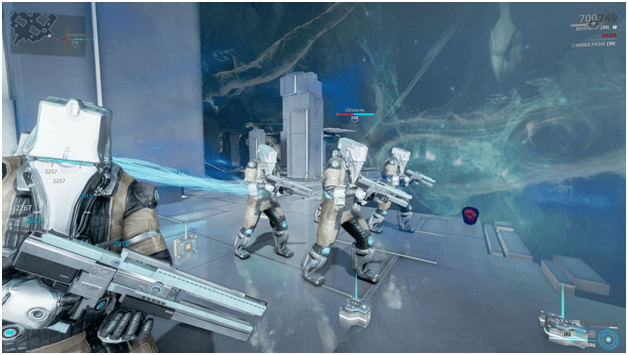 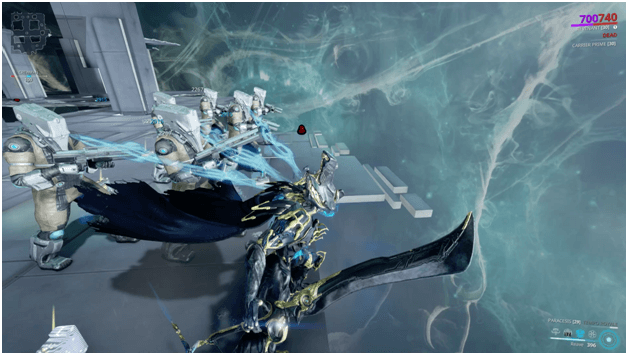 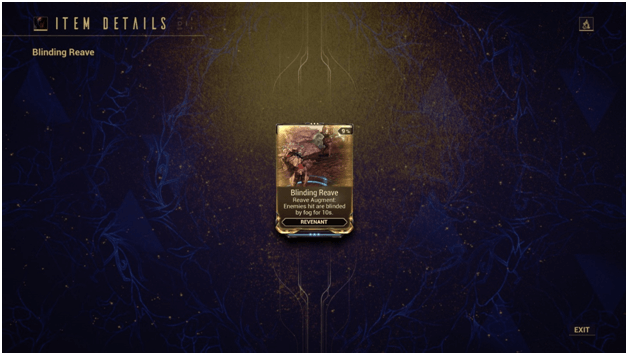 Augment Mod: Blinding Reave causes the ability to blind enemies who are affected by Reave. 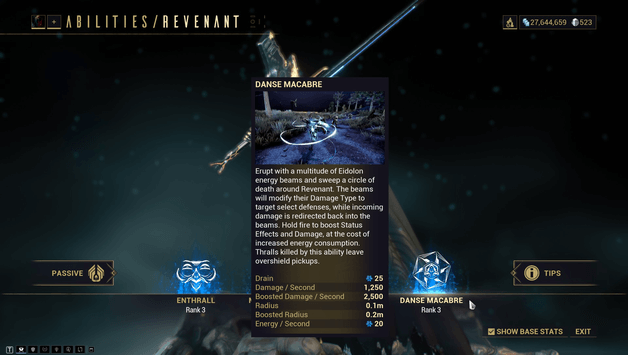 Revenant begins to rotate with his movement slowed while he unleashed deadly energy beams around him damaging enemies in a radius around him.

These sentient energy beams adapt to enemies and deal their weakness against them making this a very powerful ability.

This becomes useful due to the high amount of damage and the ability to find the weakness of enemies as well as being able to clear out large amounts of enemies within seconds.

When an enthralled enemy is killed by the beams, it drops an overshield pickup and if an energy pillar is hit, it explodes and deals damage in an area.

If Mesmer Skin is active, any damage that blocked will be added to the damage of Danse Macabre.

During this ability Reave may be caste at 50% less energy cost to allow quick movement or a combination of the two abilities. 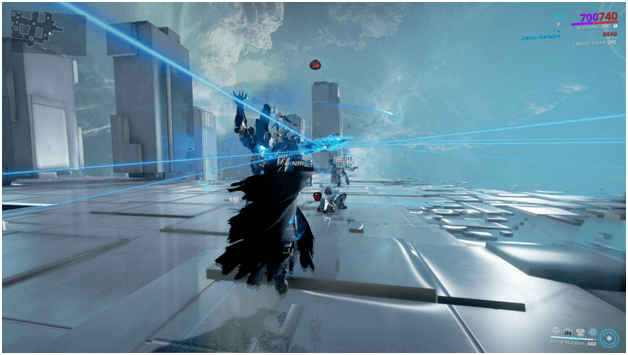 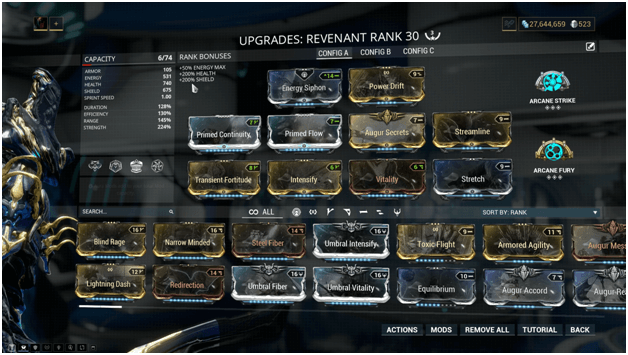 This build allows Revenant to efficiently use all of his abilities when need at a decent cost of energy while having good stats for duration and range and making use of a great amount of ability strength.

This build works well with all of Revenants abilities and can be used for multiple situations and is one of the best suggested builds for those new to the Warframe.

Having a decent amount of ability strength guarantees powerful damage of all of the abilities.

Enthrall will cost less and last a bit longer than usual while damage from the pillars will be higher and have a slightly larger radius.

The amount of charges of Mesmer Skin will be increased due to the ability strength while its stun duration will be a bit longer.

His Reave ability will have an increase width while its duration lasts a bit longer along with the increased damage and reduced energy cost.

Danse Macabre will be able to be cast and channeled with less energy consumption and will deal excellent damage in a decent radius. 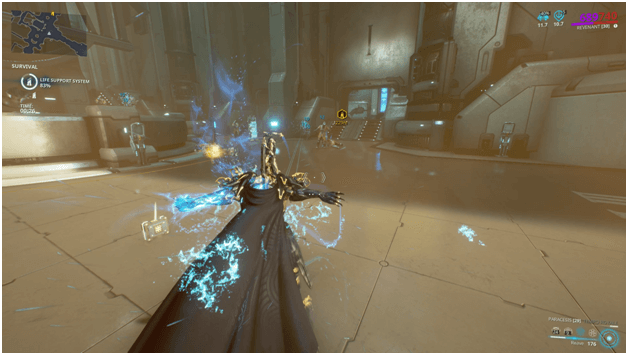 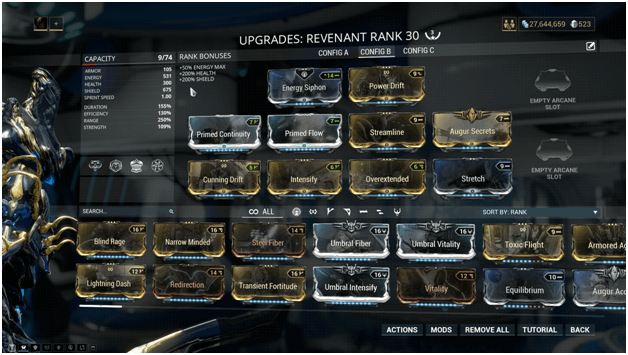 This build focuses on adding range and duration to Revenants abilities along with reducing the energy costs.

With this build most of his abilities are improved by the added range and duration.

Enthrall may be casts further away from enemies, allowing Revenant to take control of enemies further away and at a safe distance.

With the addition of duration to the build, Mesmer Skin will stun enemies for a longer duration.

The width and duration of Reave will be increased allowing more enemies to be hit and the duration to last longer.

Danse Macabre will be able to be cast and channeled long and will have a very large radius allowing it to hit several enemies and cover large areas.

This works will with areas that need to be defended and can easily clear out waves of enemies on defense and survival missions. 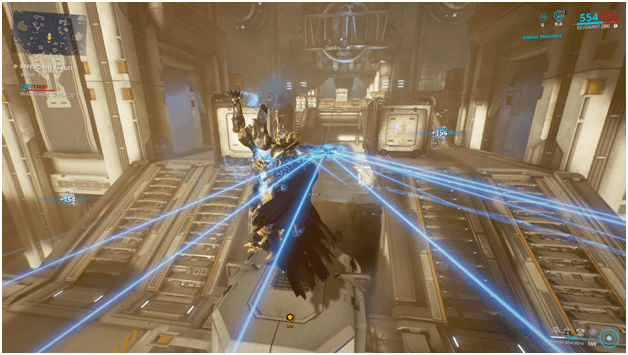 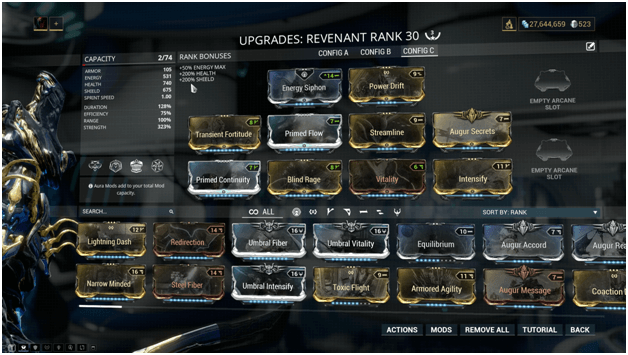 This build maximizes the damage of all of Revenants abilities, allowing him to deal extensive damage to his enemies.

All of his abilities will deal an increased amount of damage and last slightly longer when it comes to duration.

Due to high amount of ability strength, Mesmer Skin will have several charges making him very tanky and good at dealing damage while having crowd control.

This is a powerful build but may rely on conservation when it comes to energy. 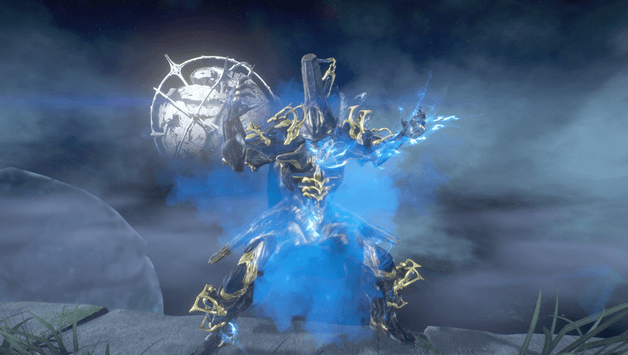 Revenant is a very powerful and unique Warframe and due to his abilities he can be good for damage, crowd control and many more roles.

He can deal a large amount of damage to majority of the enemies due to his Danse Macabre ability and take advantage of using his Mesmer Skin to become almost unstoppable.

Several of his builds allow him to deal large amounts of damage while ignoring and evading different damage sources.

His abilities have a lot of synergy making him very easy to use for beginners and very powerful when used by more experienced players who know how to use him well.