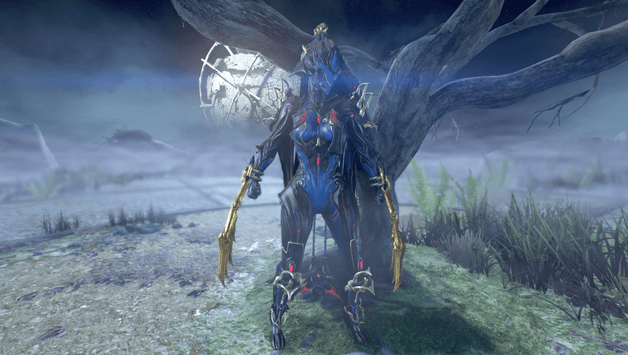 Garuda is a violent and bloodlust type of Warframe who seeks to rejuvenate herself by taken life from her enemies and causing immense pain to them by dealing tremendous attacks that leave them bleeding to death.

She is a very violent Warframe who yet has somewhat of an elegant fashion be able to be both vicious and accurate at the same time, this Warframe strikes with precision and agility being able to fatally damage enemies and take their life for her own.

How to Get Garuda? 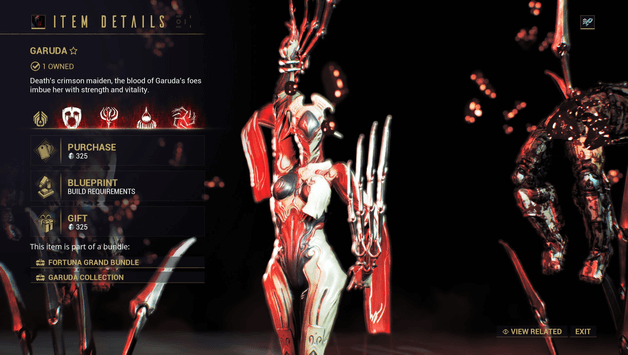 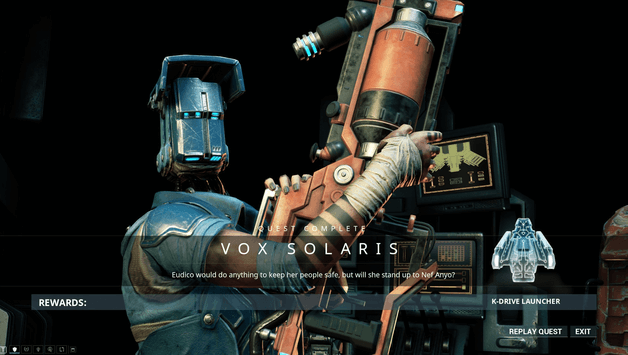 Her blueprint is rewarded after completing the Vox Solaris quest which can be done when you first arrive in Fortuna. 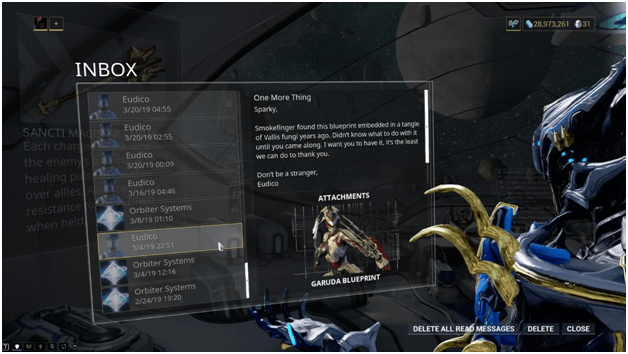 Although the reward for the Vox Solaris quest is a K-Drive, Eudico will send you Garuda’s blueprint after the quest is completed making it more of a bonus reward.

Garuda may also be purchased already built for 325 platinum via the market on the orbiter. 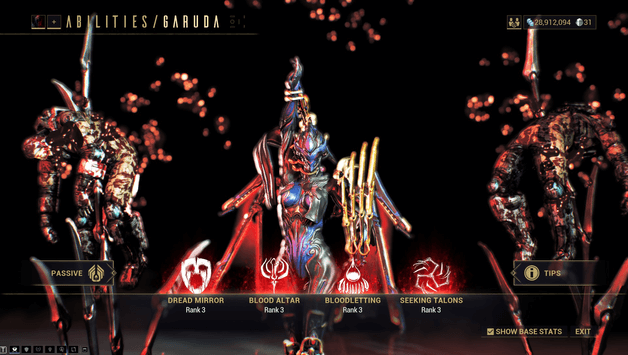 Garuda has the power to strike enemies and control take their life force, bleed enemies to replenish health, sacrifice her health for energy and unleash deadly talons to cause enemies to bleed heavily .

His passive allows her to gain a damage bonus that affects both her weapons and abilities depending on how low her health is.

If Garuda has no melee weapon equipped, she will use her Garuda’s Talons in missions which take place of the absent melee weapon. 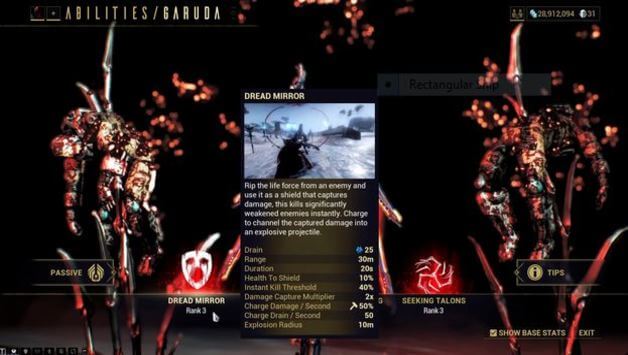 Garuda leaps towards an enemy and takes a percentage of their life force to use as a shield.

The shield protects Garuda from enemy attacks and once this is up she may hold down the ability to charge a powerful projectile.

This blood like projectile will drain her energy and build up damage depending on how much life force she has taken when she first cast Dread Mirror.

Unleashed the projectile will damage enemies in an area and knock them back.

While the shield is active, Garuda will be protected and enemies that are in her way during different kinds of movement such as rolling forward will knock enemies back.

This ability is great for defense, allowing Garuda to fight with the shield active so she can be protected while engaging enemies.

The charged projectile can stack up to a high amount of damage and is very useful for clearing crowds or hitting enemies that are far away.

Using the initial leap is a good way to distance yourself from enemies or to catch up to them. 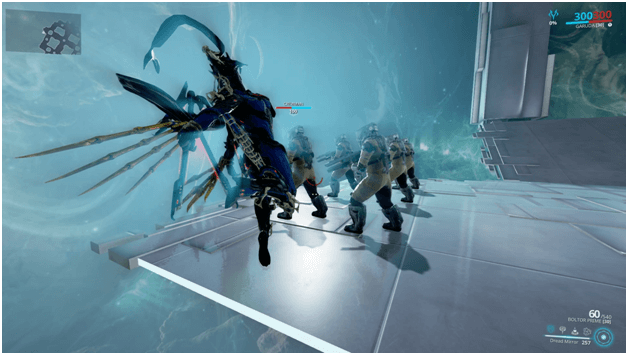 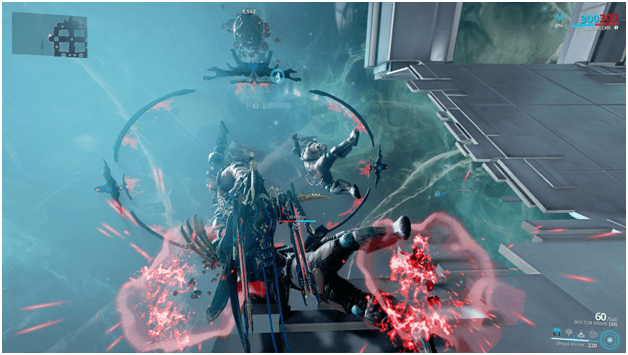 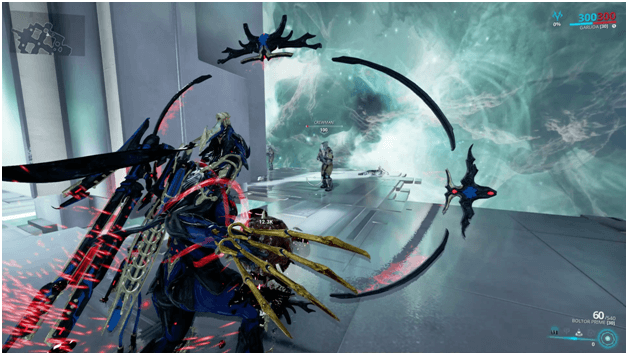 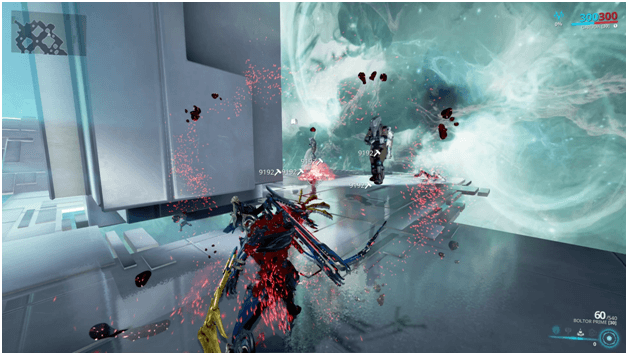 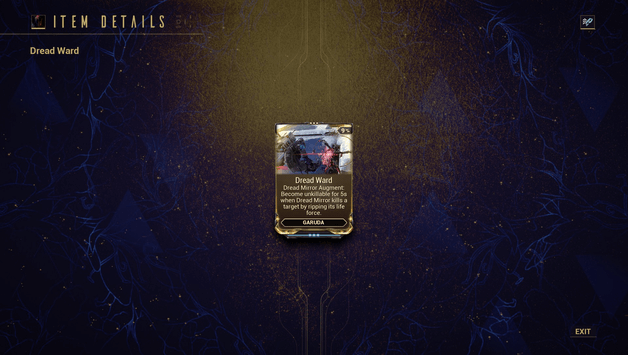 Augment Mod: Dread Ward causes Garuda to be invulnerable for an amount of time when Dread Mirror kills an enemy. 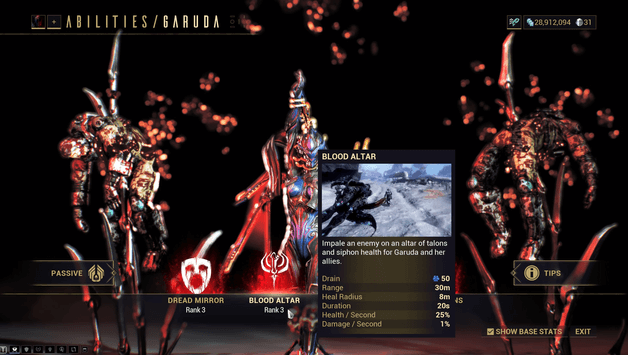 Garuda impales an enemy and forces them to bleed out which restores health to her and her allies within a radius.

The radius of the healing can be seen visually and multiple enemies can heal you at the same time.

Multiple impaled enemies will simultaneously and heal you and your allies allowing you to regenerate health faster than with just a single impaled enemy.

This ability is great for increasing survivability by giving health to allies in the area as well as disabling enemies that need to be set aside for the moment. 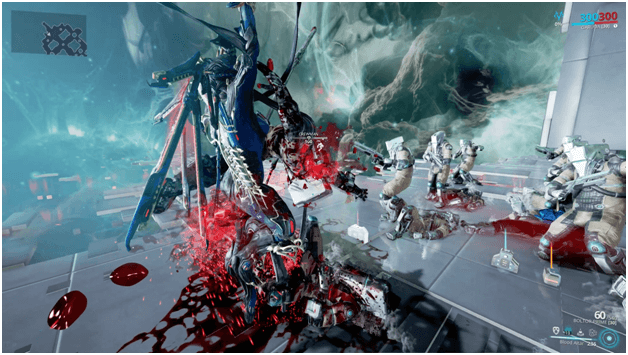 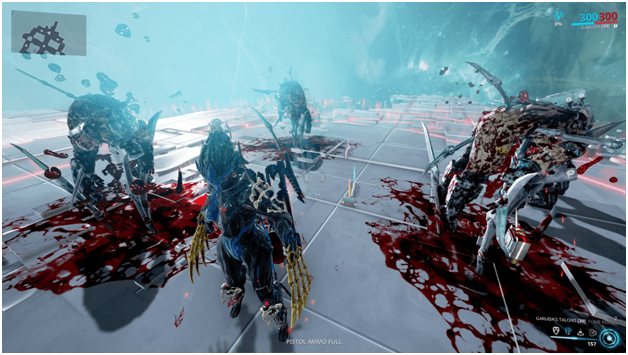 (Impaled enemies bleeding and giving out a healing aura) 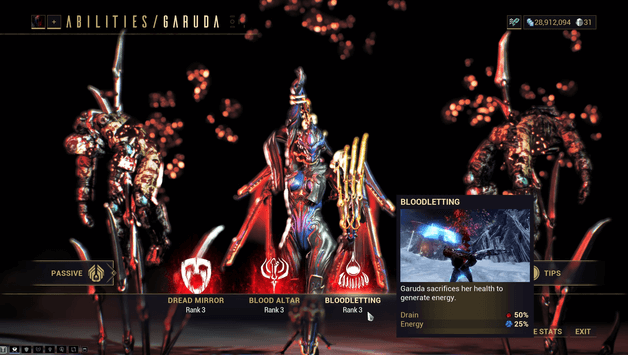 Garuda jumps into the air and sacrifices a percentage of her health in order for her to generate energy for herself.

Using this ability at crucial times may change the output of many situations as it works great as a backup energy source. 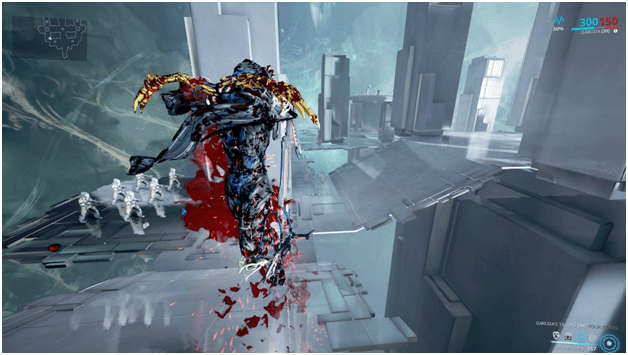 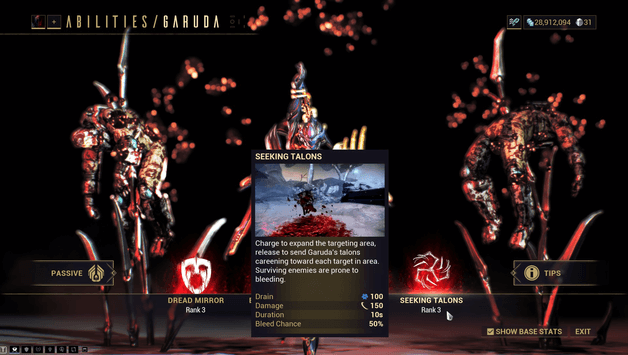 Garuda charges up her attack which has a reticle that expands depending on how large she charges it.

Upon releasing the ability, Garuda will unleash her talons as projectiles to damage enemies inside the reticle.

Enemies will be damages and stunned where survivors will continuously bleed out for high damage over time.

This ability is great for dealing additional damage to enemies or to finish enemies off since it can be cast before engaging a group or cast on enemies that try to flee.

Enemies who survive will have a mark on them which will give them a higher chance to be susceptible to the bleeding which can cause them to gain two bleeding status effects, furthermore increasing the damage they take. 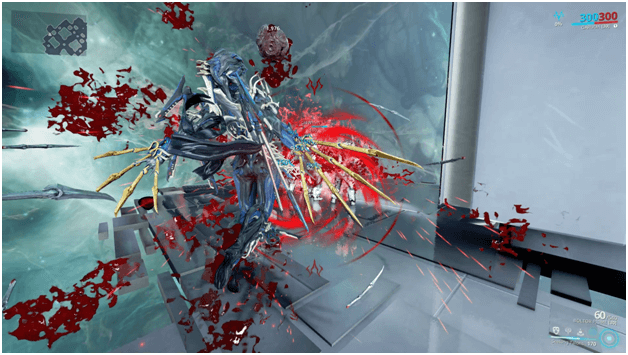 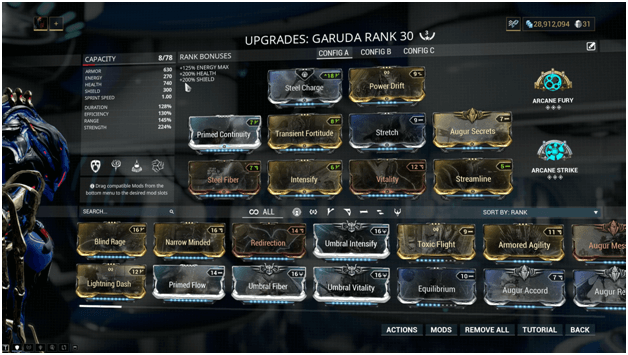 This build is set to be balance to enable Garuda to maintain decent stats for her abilities while still being efficient in missions.

Her abilities will be able to deal more damage while having a longer duration and larger area of effect along with a reduction to the cost of energy for the abilities.

With this build it is easy to use Garuda’s abilities allow you to adjust to different playstyles as this build can be suitable for several missions. 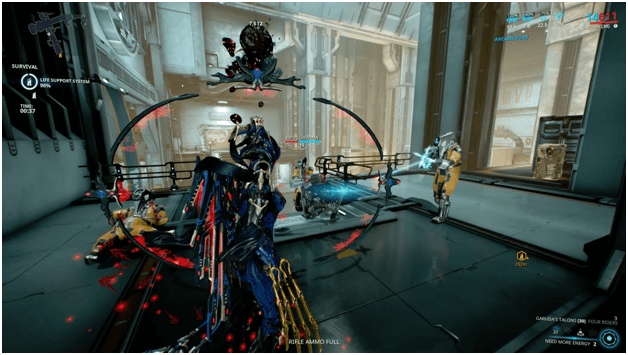 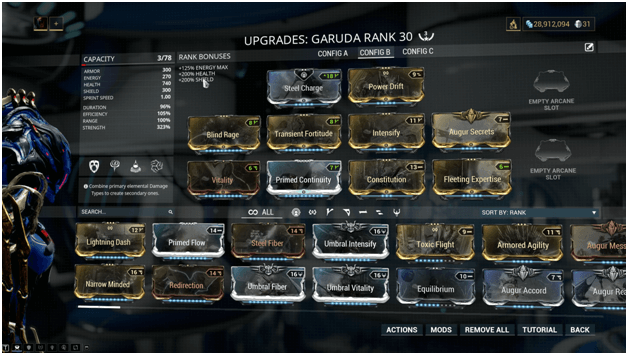 With this build, Garuda’s abilities focus more on dealing damage with a small reduction to duration and steady stats for efficiency and range.

The benefit of this build is that she has a very high ability strength which allows her to deal more damage, absorb more damage and furthermore increase the strength of her other abilities.

This build works great for several missions when the player decides to go for a more aggressive yet strategic playstyle.

Most of the abilities will still have decent range but fighting at closer ranges will greatly allow Garuda to take advantage with her abilities. 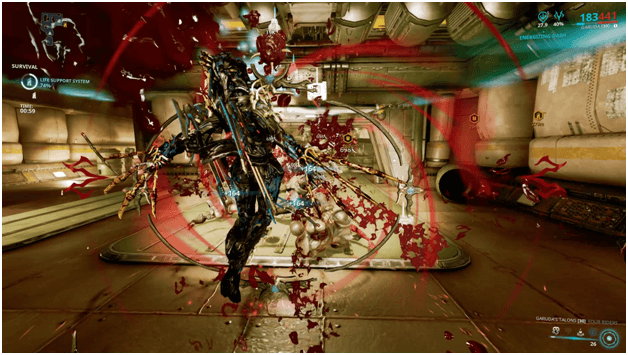 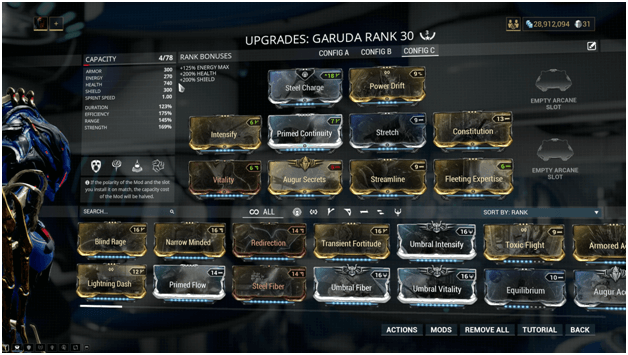 This build is mainly for the purpose of being able to repeatedly cast Garuda’s abilities allowing her not to cast ability after ability but also strategically used them several times during a mission when needed.

Since she has abilities that have her leap and dash around, she is capable of getting across the really easily.

At this point Garuda will have no trouble using multiple skills and repeating any skills that have finished already.

Her Seeking Talons ability can easily be used to damage enemies as well as her Dread Mirror which will both cost less energy making them available to reuse over and over again. 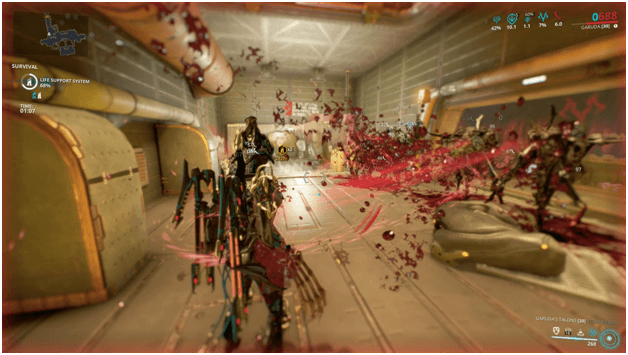 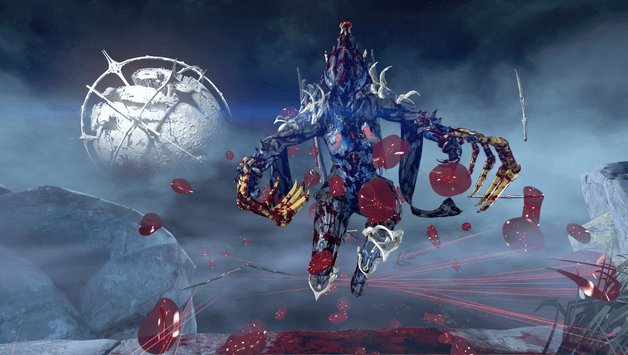 Garuda got a lot of people excited, especially those who wanted a little more gore in Warframe but now they actually have it.

She excels greatly in causing damage to her enemy in countless ways which focus on bleeding as well.

Her abilities may need some understanding to use her fully but they can be easy to understand after of use.

From leaping from one enemy to another and draining the life out other to restore health,

A very precise and violet Warframe at the same time, Garuda is a unique Warframe capable killing enemies, healing allies and crowd control.