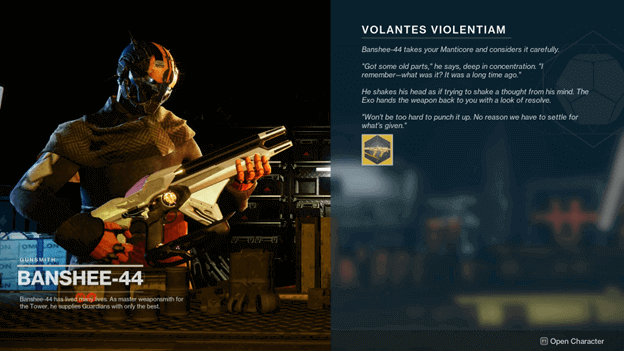 A new weapon has once again been introduced to us as Season of the Seraph has arrived and many players want to get their hands on it.

The Manticore is a new Exotic Submachine gun and to make it even better, it has its Catalyst that players may obtain.

To obtain the Catalyst for The Manticore, players will need to finish the Volantes Violentiam Exotic Catalyst Quest.

How to Get the Volantes Violentiam Quest?

You may obtain the Volantes Violentiam Exotic Catalyst Quest once you have The Manticore and will be able to get it from Banshee-44. 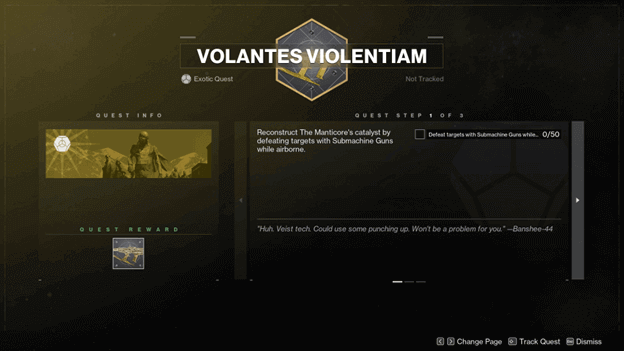 Step 1: Reconstruct The Manticore’s catalyst by defeating targets with Submachine Guns while airborne.

The Manticore is a weapon that is more efficient when you are airborne, and it seems like you will need to get used to its mechanics by defeating enemies in this specific way.

Using The Manticore is the most suggested way but if you have a better weapon at the current time you can use it as well.

Completing this quest step will reward you with a Rare Sniper Rifle.

This quest step is more specific and will require that you first complete activities such as Vanguard Strikes as well as Gambit and Crucible matches.

You will also need to defeat enemies while using The Manticore to proceed but it is more of finishing the above mentioned activities that take up time.

Once you have finished calibration, it is now time for you to head back to Banshee-44 to complete the quest and get the Catalyst.

Completing the Volantes Violentiam Exotic Catalyst quest will reward you with The Manticore’s catalyst, which can be used to upgrade the weapon.

You can get the Flying Monster perk after unlocking the Catalyst, providing you with a buff that increases your resistance after defeating enemies while airborne.

While The Manticore is not considered to be one of the best weapons, it still has a lot of uses and when used properly, can be very effective.

Being that The Manticore is a weapon that promotes airborne combat, there are a lot of other techniques that can be used alongside it.

The Manticore’s catalyst gives players more survivability and lets them fly into battle, shredding enemies as they hover around.