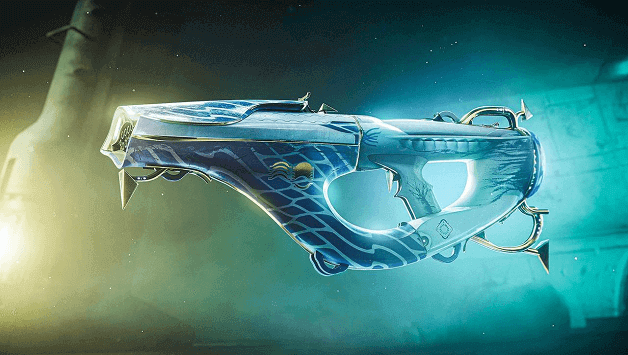 Season of Plunder has arrived and there are tons of gear that players can now get their hands on, including a new exotic weapon, Delicate Tomb.

Delicate Tomb is an Exotic Fusion Rifle that appears to perform much more like a shotgun in a way due to the spread of its projectiles.

What special weapons lack in ammo capacity, the Delicate Tomb makes up for multiple projectiles and the ability to annihilate multiple enemies in seconds.

The ability to create Ionic Traces makes it much easier for you to recharge your Arc subclass abilities as well as cause extra damage to enemies for clearing them quickly.

How To Get Delicate Tomb? 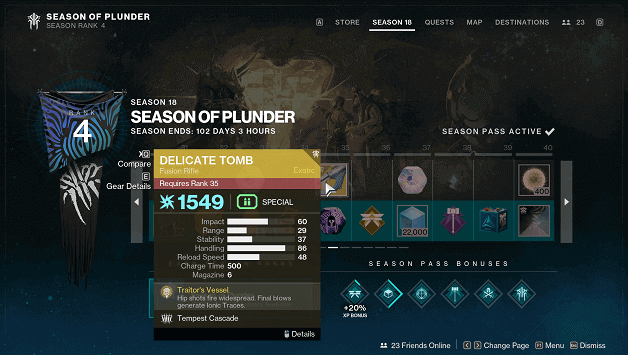 Delicate Tomb is the seasonal weapon for Season of Plunder which makes it obtainable for everyone regardless of if they have a season pass or not.

Those who do not have an active season pass during Season of Plunder will be able to obtain the Delicate Tomb when they reach Rank 35 in the season.

However, players who have invested in the season pass will be able to obtain Delicate Tomb at Rank 1, starting easily with this deadly Exotic Fusion Rifle.

Collecting an Ionic Trace overcharges this weapon’s next shot, jolting targets on hit.

The Delicate Tomb is especially easy to grip.

Delicate Tomb is capable of dealing a lot of damage and does not take too long to fire shots in succession, which make it easy to kill enemies in a short amount of time.

Fires a wide horizontal spread when shot from the hip. Final blows with this weapon have a chance to generate Ionic Traces.

How To Get Delicate Tomb Catalyst? 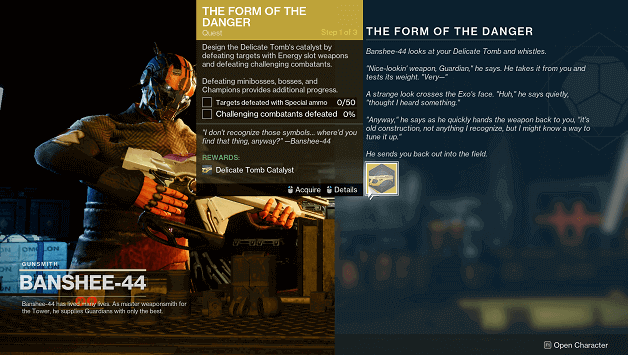 Like most of the seasonal weapons that are introduced in the game, the Delicate Tomb Catalyst may be obtained by completing an exotic quest.

The Delicate Tomb Catalyst is a reward from a quest called The Form of The Danger, which can be obtained by speaking with Banshee-44 once you have the weapon.

Completing “The Form of Danger” will provide you with the catalyst which will require you to use the Delicate Tomb to unlock its perk.

Once you have killed enough enemies with the Delicate Tomb, its catalyst will unlock the Ionic Interment perk, which adds effect when collecting Ionic Traces.

The Delicate Tomb is a very deadly weapon, especially when used at closer ranges, capable of destroying an enemy’s health within seconds.

Its ability to jolt enemies, causing chain lighting attacks to hit multiple targets, making it easier to clear out those in your way.

Since Ionic Traces also power help recharge Arc abilities, making it easier for you to dish out more damage with faster cooldowns.