As cute as it may seem, there is a bit of trick or treating in Destiny 2 but getting Candy here is obtained more forcefully.

These are used mainly during the Festival of the Lost event and are obtained in various ways to be spent later on.

Where to Get Candy?

Candy can be obtained anywhere in Destiny 2 but the chances vary based on the enemies and how many of them you defeat.

As long as you are wearing a Festival of the Lost mask, there is a good chance that Candy will drop now and then when you defeat enemies.

How to Get Candy?

To get Candy, you must first be wearing a Festival of the Lost mask, which is available from Eva Levante when you start participating in the event.

You can get your Festival of the Lost mask from her during the Gone But Not Forgotten quest, and further on will be able to obtain cosmetics for it. 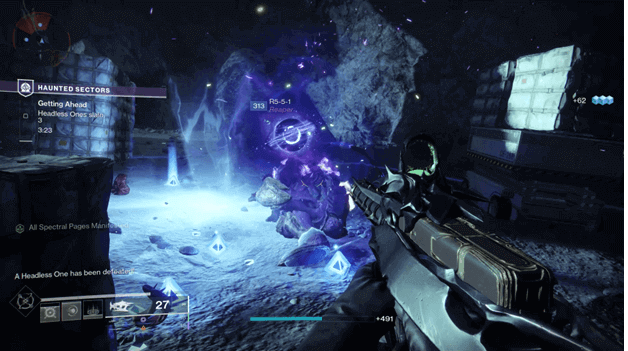 Before you go out and begin killing enemies, make sure that you have your Festival of the Lost mask equipped and you should see Candy drop from time to time.

Enemies will drop blue triangular objects which symbolize candy and once you walk over them, they will be picked up.

If you have missed some of the Candy that has fallen, you can find them later on at the Postmaster and collect them in bulk.

Best Way To Get Candy

Doing Haunted Sectors is a great way for you to obtain Candy as they drop in bulk from the Headless Ones.

It would be best if you also grabbed some bounties from Eva Levante, which will reward large amounts of candy when you complete them.

Most enemies will drop 1 or 2 of these when defeated while stronger enemies tend to drop about 4 to 5 at times.

What to do With Candy? 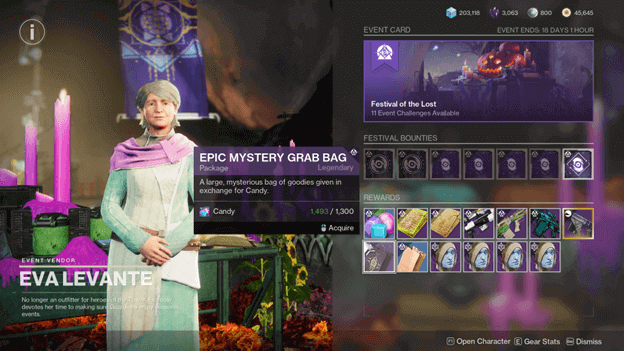 Candy is used to purchase Mystery Grab Bag (including the Epic variant) from Eva Levante, which offers players various rewards.

The Mystery Grab Bags can contain materials, gear, and more, which makes it also a bit fun to play your luck to see what you get.

You will also need Candy if you want to complete the Candy Corner challenge, which rewards you with the Telesto Mask as well as an Enhancement Prism and Event Ticket.

There does not seem to be a significant limit when it comes to the carry limit for Candy and since you will need a ton of it, it looks like the digits go way higher.

It would be good to use your Candy whenever you can get an Epic Mystery Grab Bag or you can save it for later on to get them in bulk.

Why is Candy Not Dropping?

The common reason why Candy does not drop is if you have not gone through with the Festival of the Lost quest yet.

You need to obtain the Gone But Not Forgotten quest and complete it as you get your Festival of the Lost mask there.

If you still are not obtaining any Candy, you should make sure that it is equipped or else Candy will not drop from enemies.