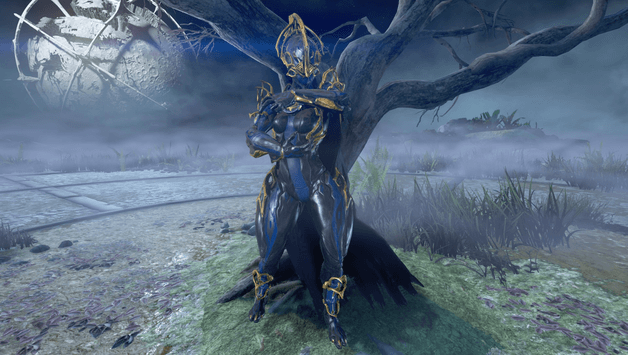 Nyx is a Warframe who specializes in using psychic abilities to wreak havoc upon her enemies and uses such energy to damage and force them into an unwanted situation.

She excels at manipulating enemies, causing them to fight each other as well as use her psychic abilities to weaken them taking the fight not only from physical but psychologically as well.

How to Get Nyx? 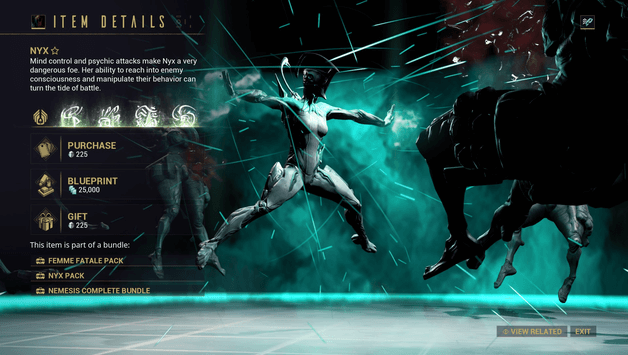 The part blueprints for crafting Nyx may be obtained by defeating Phorid who appears as a special boss on different missions.

Unlike most bosses, Phorid does not appear on a specific mission as he can manifest on different invasions, for more information on finding and killing Phorid see our Guide on Defeating Phorid.

Her blueprint may be purchased from the ingame market in the orbiter for 25,000 Credits.

Aside from farming for her parts, Nyx may be bought in the ingame market for 225 Platinum. 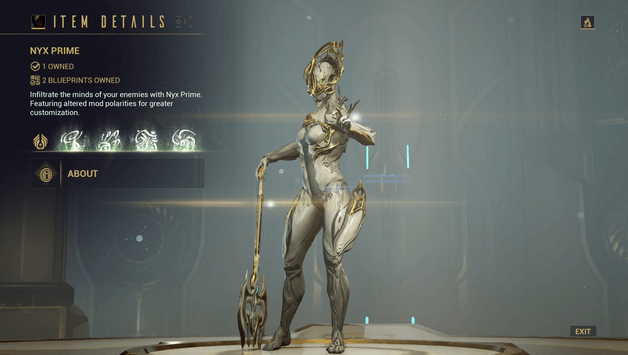 Nyx Prime is the prime and version of Nyx which is stronger as she has increased shields and armor along with a faster sprint speed. 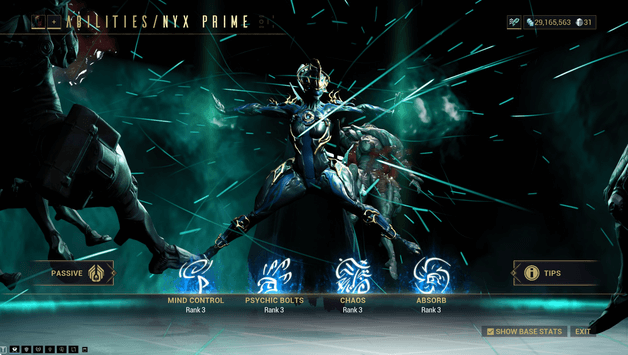 Nyx has the ability to control an enemy and make it fight for her, send out psychic bolts that weaken enemies, cause enemies to go out of control and fight each other and absorb damage to be release in a large area.

Her passive ability causes enemies to be less accurate when attacking her except when she is using her Absorb ability. 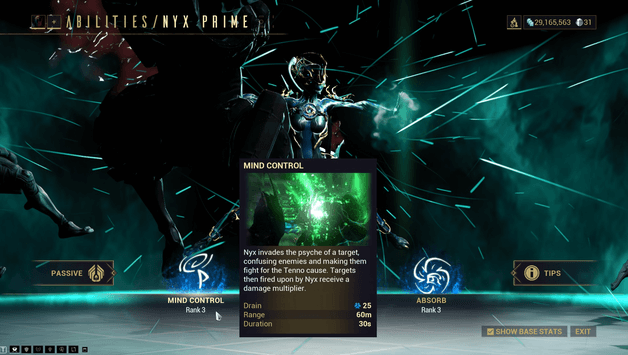 Nyx targets an enemy and uses her psychic powers to take control of their mind and cause them to fight alongside her and her allies.

During the initial time that the enemy has been taken over, the enemy will absorb damage (from Nyx as well) which will be converted into damage that it deals for a few seconds.

This ability is very useful and can allow Nyx to take any enemy and create a unit that can deal a lot of damage to enemies.

Using this on enemies with high damage and health can create a very powerful minion to fight alongside Nyx for a good duration of time.

The mind controlled enemy will also use any abilities that it has to benefit Nyx and her allies. 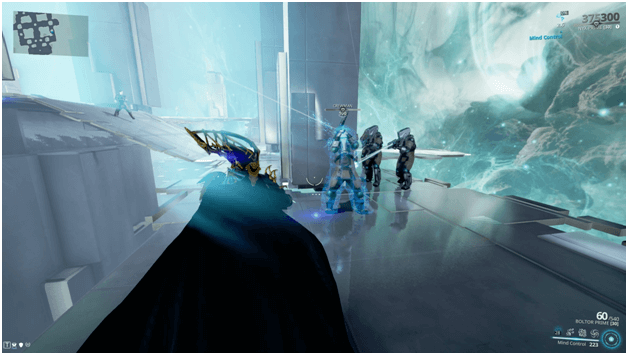 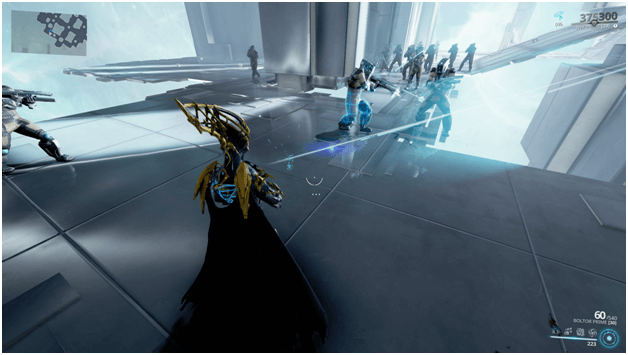 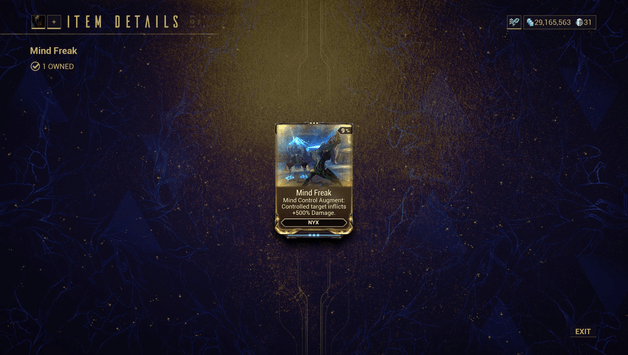 Augment Mod: Mind Freak causes the target that has been mind controlled to deal 500% more damage. 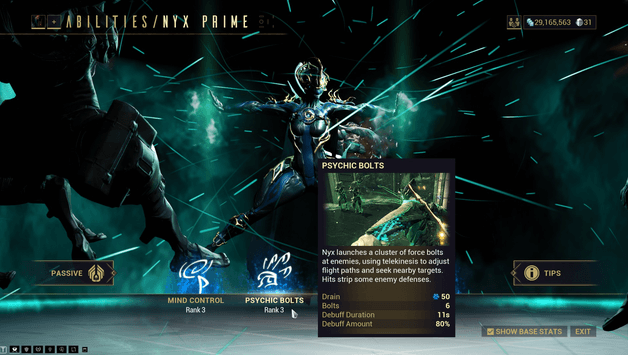 Nyx sends out bolts using her psychic energy to seek out enemies and inflict weakness upon them, affecting their stats.

This will reduce the armor and shields of all enemies, reduce the speed of infested and temporarily remove the auras of ancient infested enemies.

Using this ability can make killing specific groups of enemies easier and can be a lot of help when used against the infested as well as ancient infested by removing pesky auras.

Using this ability with Chaos is very effective as it weakens enemies and makes them kill each other more efficiently. 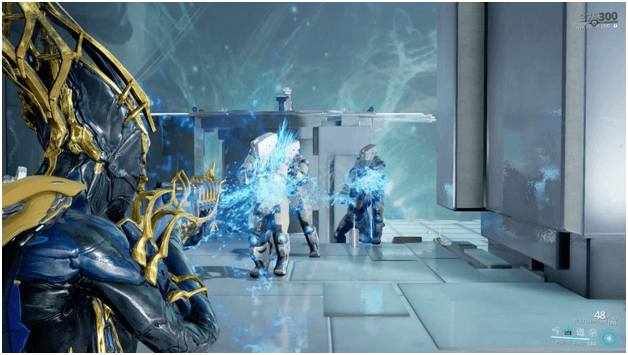 (Nyx casting Psychic Bolts on a group of enemies) 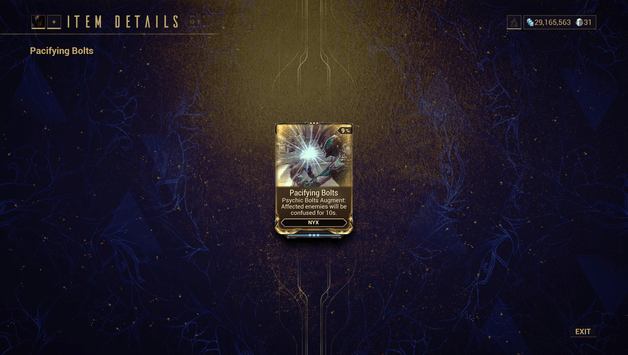 Augment Mod: Pacifying Bolts causes enemies affected by Psychic Bolts to be confused for an amount of time. 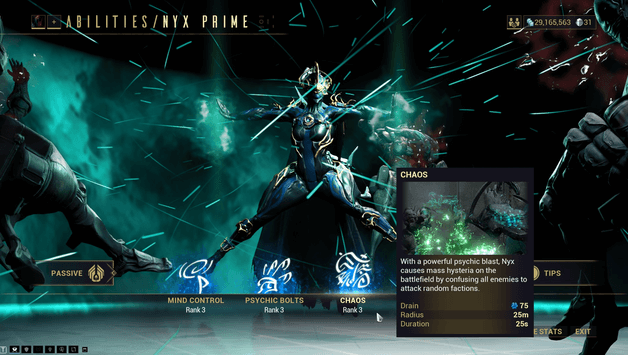 Chaos causes enemies in an area to become confused and target random targets, paying less attention to Nyx and her allies.

This ability is great for crowd control and turning enemies against each other which can be used to make a large group of enemies easier to kill during or after the ability.

The duration of the ability is pretty long and can provide a large amount of time for Nyx and her allies to plan out their next move. 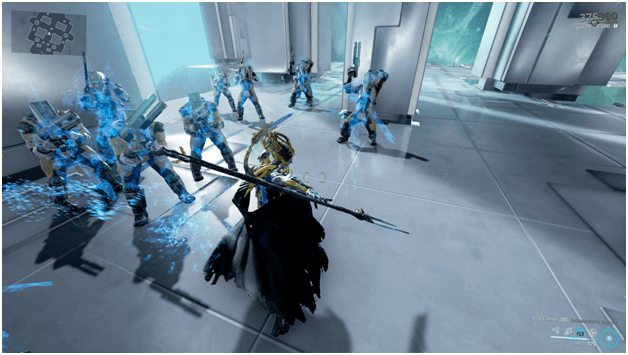 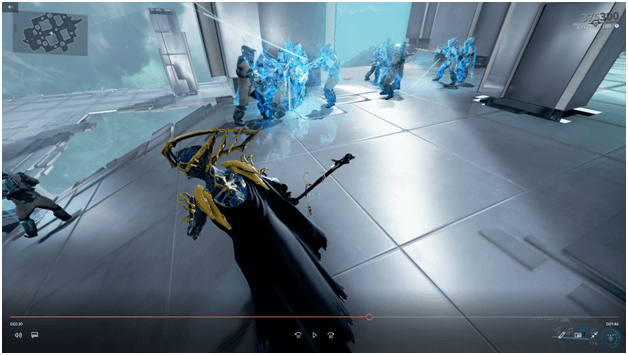 (Enemies affected by Chaos attacking each other) 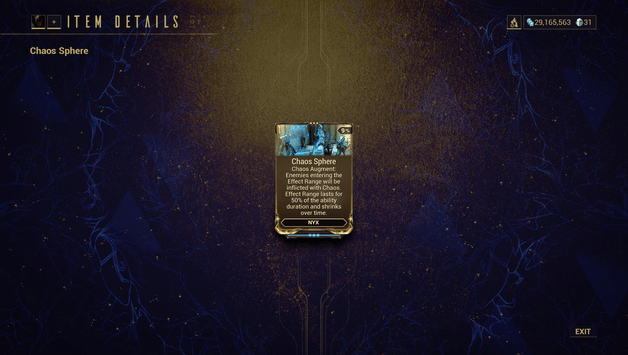 Augment Mod: Chaos Sphere causes enemies that enter the area where the ability was cast to be affected at half the duration while the size of the ability reduces over time. 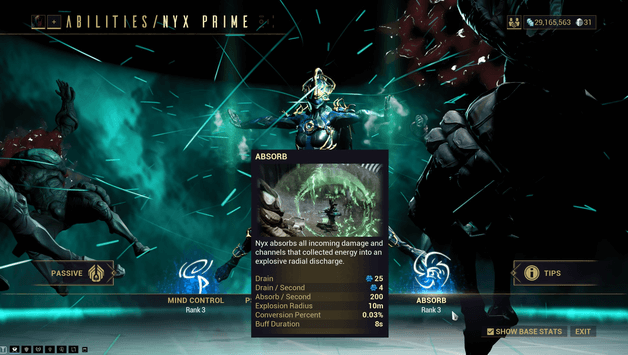 Nyx creates a barrier around her which absorbs all incoming damage, rendering her invulnerable and building up damage from all sources.

Absorbs will stay active as long as Nyx has energy as the initial cost is applied when casting the ability and afterwards there will be an energy per second while the ability is active.

Damage that is absorbed can be seen where any buffs are shown which is the stored damage that can be distributed.

If Nyx recasts the ability or runs out of energy, the ability will end and Nyx will unleash the absorbed damage around her, dealing damage and knocking enemies back.

After Absorb ends, a percentage of the overall damage is added to Nyx as a weapon damage buff for a period of time. 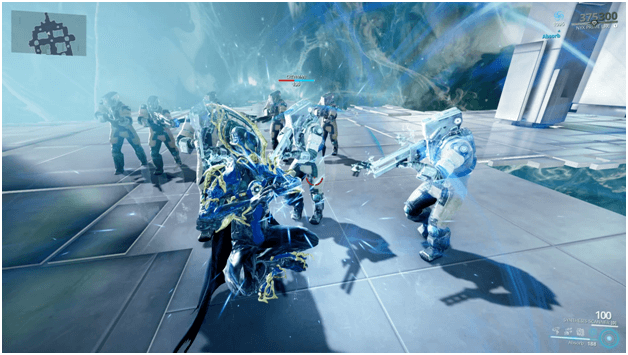 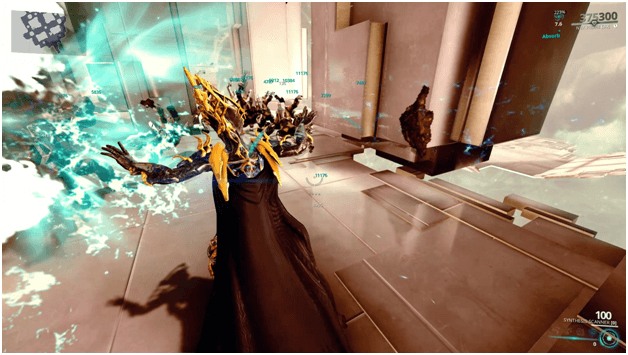 (Nyx releasing absorbed damage around her) 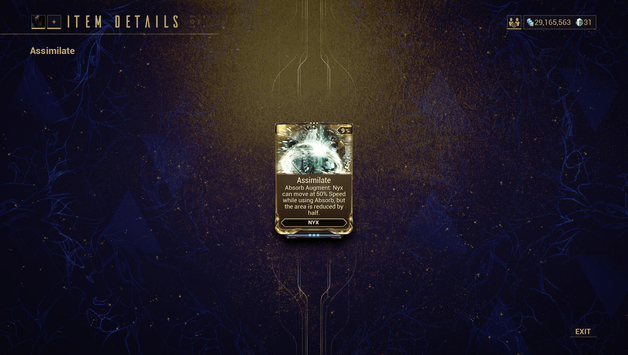 Augment Mod: Assimilate allows Nyx to move at 50% movement speed while Absorb is active but with a reduced area. 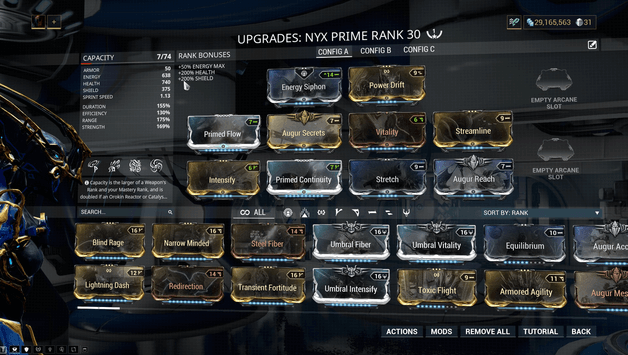 Mind Control will have a longer duration as well as the benefit of being cast further away from the target at a reduced energy cost.

Psychic Bolts will have a 100% debuff amount while lasting slightly longer than usual and cost less energy.

The area of which Chaos effects will be increased and the duration of the ability will last longer as well as it costing less energy.

Absorb will cost less energy to cast and will drain less over time while the radius and damage of the explosion will be increased.

This build is very useful in many situations and can be used for those who just started out with Nyx or those who want to have the ability to cast all her abilities with less worries about energy. 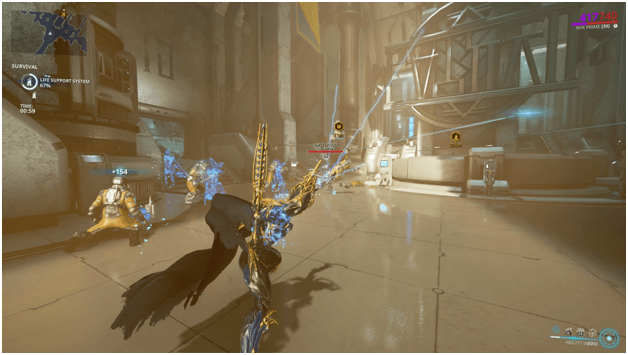 (Nyx making use of multiple abilities) 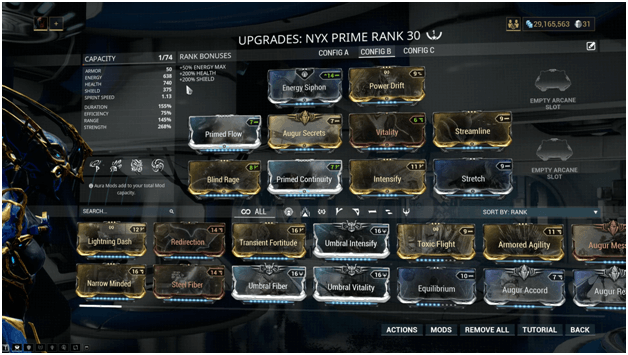 The Strength Build for Nyx intends to allow her to make use of the most suitable amount of ability strength to bolster her abilities in terms of damage and effects.

At the cost of a higher amount of ability strength, her abilities will suffer from a slightly higher amount of energy costs which is made up with the high base energy pool provide by Primed Flow.

Mind Control will have a slightly further increase in range and a slight increase in its duration.

Psychic Bolts will have an increased duration and achieve 100% debuff amount.

Chaos will have a slightly larger radius around the cast area while it gains a slightly longer duration.

Absorb may have a slightly higher cost when activating but the energy cost for the draining is reduced, damage is greatly increased and the radius of the explosion is slightly bigger than normal.

This build focuses more on dealing higher amounts of damage, especially using Absorb at close proximity to enemies and making use of the buff that Nyx gets after the ability. 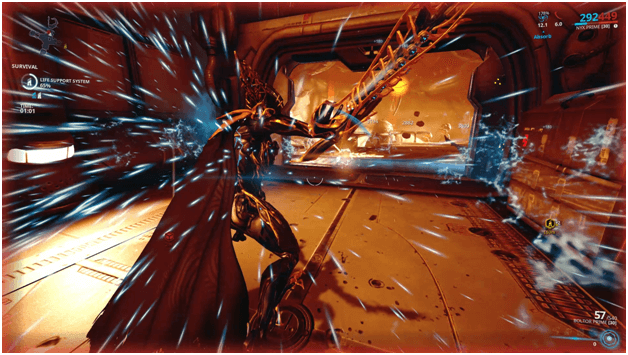 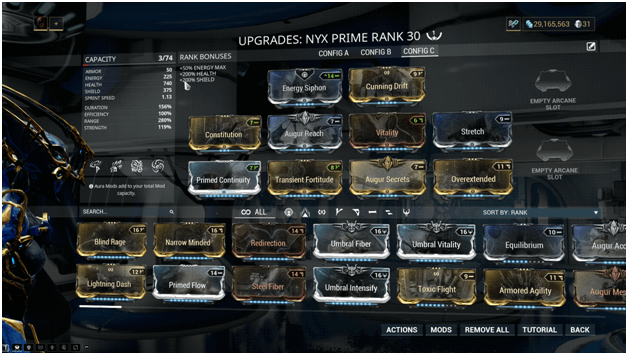 The Range build is meant for increasing the radius and distance of Nyx’s abilities allowing her to cast them further away and affect larger areas.

Mind Control may be cast from a very far distance and last a decent amount of time.

The debuff amount of Psychic Bolts reaches 95% and lasts a fairly longer amount of time.

Chaos affects a very large radius and can cause several enemies in an area to be affected while lasting a longer duration.

Absorb will have the same initial cast but will drain less energy over time and absorb a fair amount of damage with the benefit of releasing the blast in a large area more than twice its original radius.

This build is great for staying a safe distance from enemies and targeting further enemies for Mind Control.

Absorb can be used to clear large areas as long as enough damage is absorbed and can also be very useful for short blasts to knock enemies back for crowd control. 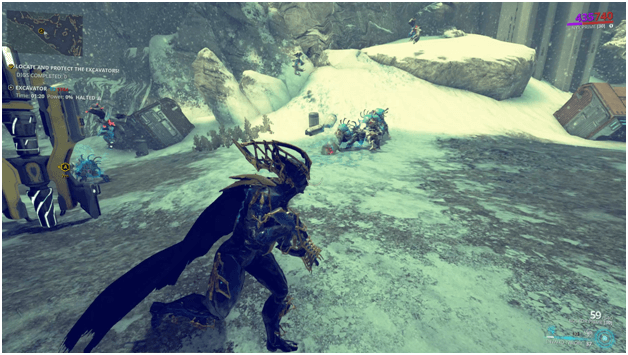 (Enemies under the effect of Chaos, fighting each other) 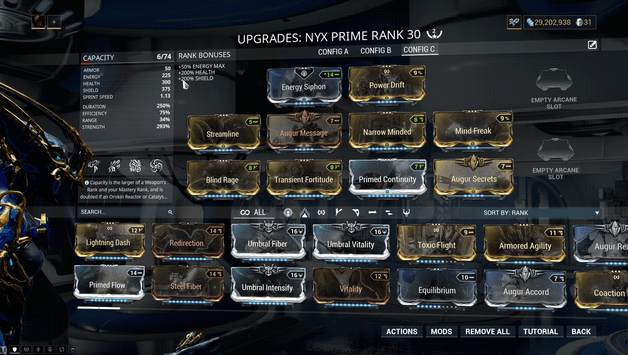 Using Mind Freak causes any targets that are affected by Mind Control to have an additional 500% which also increases based on ability strength.

The increased ability duration will provide the ability with a lot of time, making use of the empowered unit that has been affected by Mind Control.

Ability strength has been increased to benefit the Mind Freak augment allowing a higher amount of damage to be gained by the unit.

A slight disadvantage of the ability is the lowered ranged and slightly higher energy cost but this becomes irrelevant once the user adjusts to such stats. 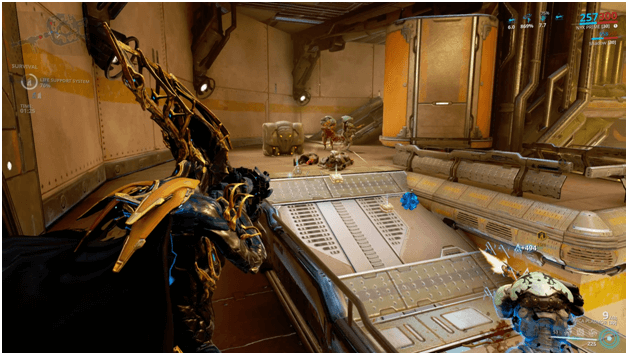 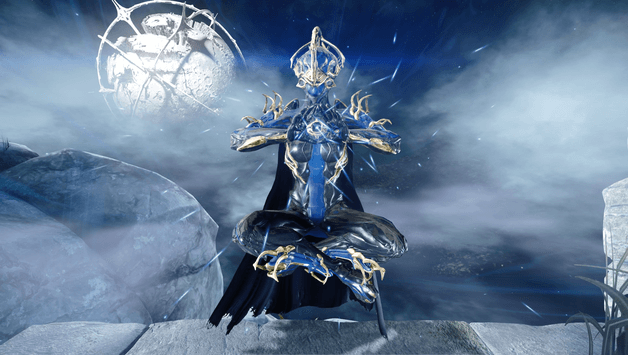 Nyx is a more strategic Warframe and may take a bit of understanding to use her well but in the end when her abilities are used to their full extent and potential, missions become very easy.

She is great for crowd control and causing enemies to kill each other while making the process of them fighting amongst themselves faster by weakening them.

Her Absorb ability is useful for many situations where she can become completely immune to damage and use it to damage enemies and knock them back.

Being able to force her enemies to fight each other creates several opening for her and her team to plan their next move as well as makes missions much easier to handle.

Those who prefer to play mind games on their enemies and create chaos with strategy will find Nyx a very fun Warframe to use.