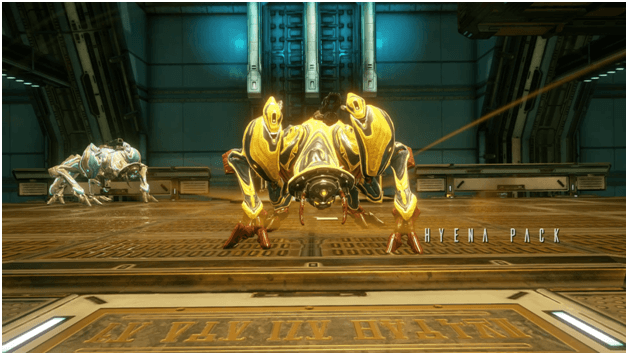 The Hyena pack is a group of robotic quadrupeds that are design to hunt down and kill their targets.

There are four different models, each with their own abilities that they use against their prey.

More, will spawn depending on how many squad members are deployed for the mission and they will work together to bring down you and your squad, if they can. 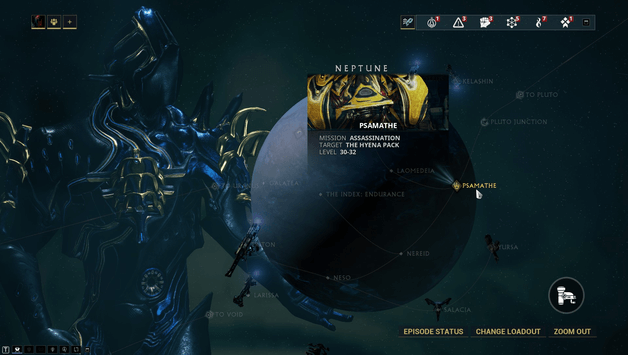 The Hyena Pack may be engaged when they are located during the Psamathe mission on Neptune. 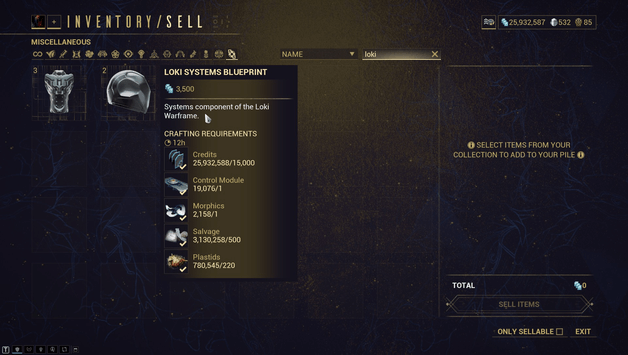 When the Hyena Pack is defeated and you and your squad have extracted from the mission, you will be rewarded a random Loki part which is needed for crafting him.

Hyena Pack has the chance to reward the following Loki parts:

How to kill Hyena Pack? 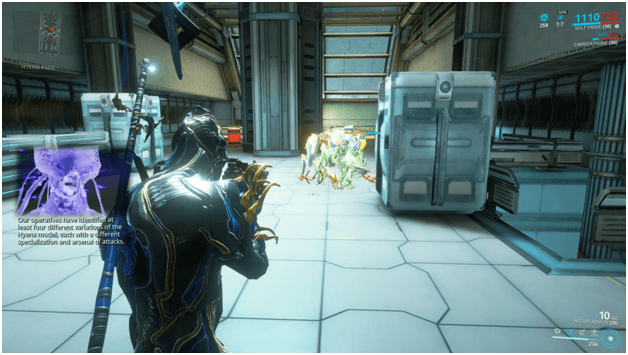 The Hyena Pack do not require any special tasks to defeat other than dealing a significant amount of damage and depleting their health.

Modding for Radiation damage will help you defeat them easily since they are weak against the said element. 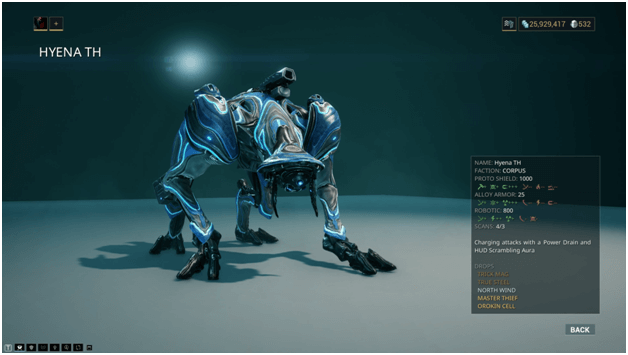 Hyena Thorium uses electricity based attacks to cause its enemies disarray and scramble their systems.

The Hyena TH will attempt to charge at its enemies dealing damage and possibly knocking them down.

It has the Electric Surge ability that is sent out an electrical wave to deal damage to those it comes in contact with.

A Disruption Aura emits from it which causes nearby enemies to lose energy and being too close can cause you to suffer from a magnetic status effect, draining your energy completely and scrambling your HUD. 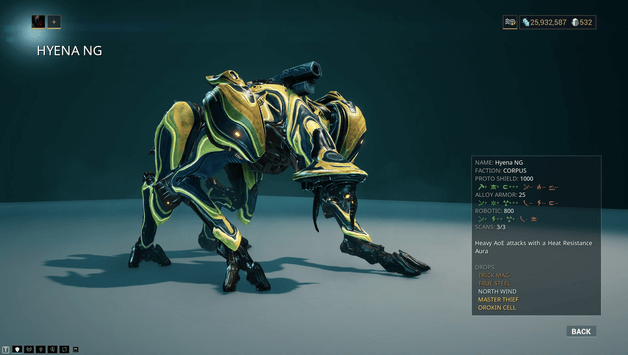 The Hyena Nitroglycerin use heat based weaponry to attack its prey.

It has the ability to fire a grenade which will deal blast damage on impact, capable of knocking targets down.

Also available for its use, the Fire Wave ability sends out a wave of fire that damages those it comes in contact with as well as a chance of causing them to burn.

It also has a Heat Resistance Aura, making it less damageable by heat attacks and abilities. 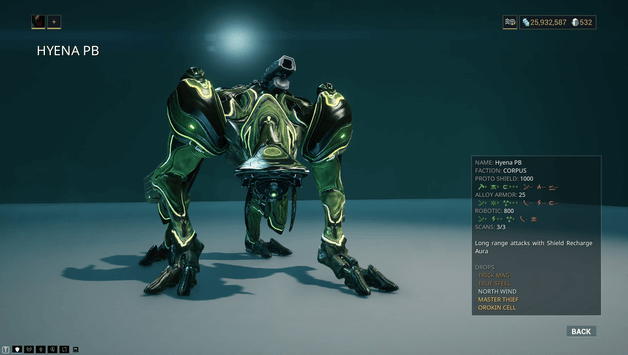 Hyena Lead uses physical damage types when attacking its targets and is capable of dealing high amounts of damage.

Its only ability is Lead Storm which causes it to leap into the air and spin around firing bullets in all directions.

Lead Storm can be very dangerous when used up close and can kill even fully modded Warframes at point blank.

Its aura allows it to recharges its shields requiring them to be drained again before damaging it. 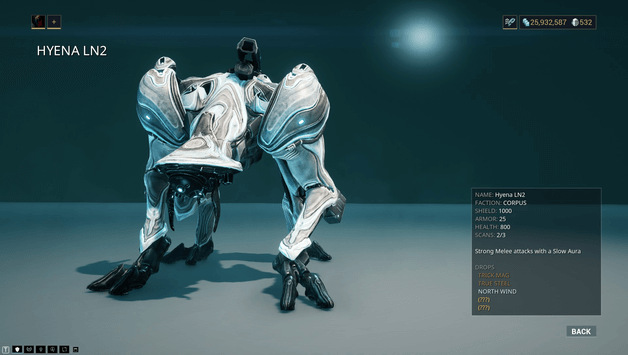 Hyena Liquid Nitrogen uses cold damage to attack its prey and deals heavy melee attacks that can prove to be fatal to most of its enemies.

It has the Ice Wave ability which sends out a wave of ice damaging all enemies in its path and slowing them.

Not only does it do different attacks that deal cold damage, it also has a Slow Aura which will reduce the speed of its enemies and greatly reduce their capabilities when it’s cold damage procs. 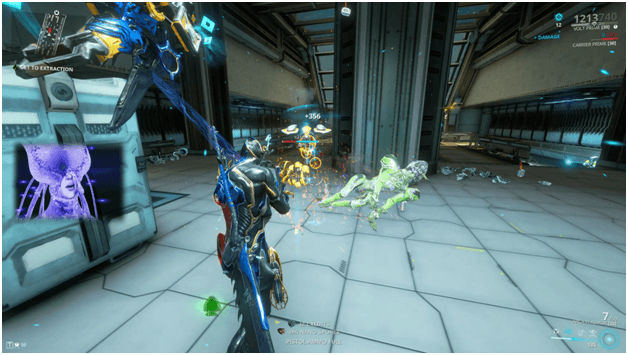 Weapons that deal a lot of damage per shot will make the mission easier since the Hyena Pack moves around quickly and trying to trace them with shots will prove difficult for some players.

With a decent weapon and build they should be easily killed and modding for Radiation damage with weapons will deal a great amount of damage to them.

Keeping a good distance from hem at all times will allow you to pick of shots better and it is advised not to let them go near you as they will eventually take you down when you least expect it. 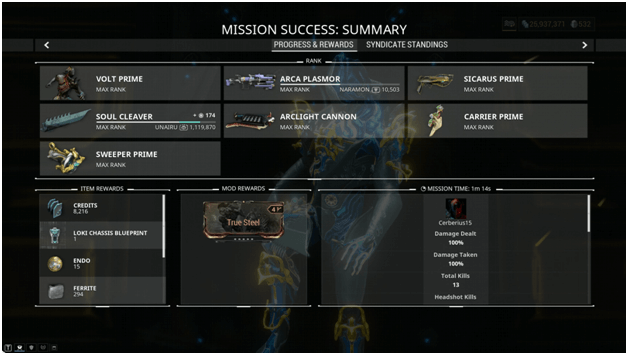 Upon completing the mission, you will be rewarded a random Loki part for later use in crafting the Warframe.