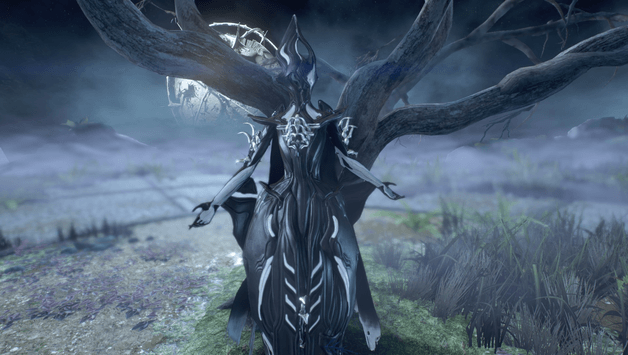 Equinox is a dual personality-like Warframe who becomes two completely different Warframes depending on which form she decides to take with the choice between being its day or night version.

She is a very unique Warframe due to her abilities to shift into a different form which provides her with new abilities which she may utilize altogether.

How to Get Equinox? 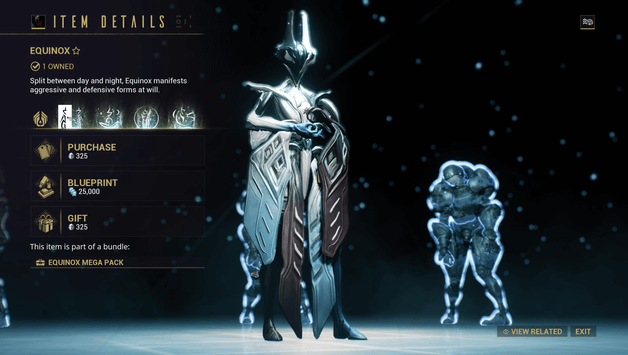 Equinox’s parts and blueprints may be obtained by defeating Tyl Regor in the Titania mission on Uranus.

Instead of farming her parts, you may purchase Equinox for 325 Platinum. 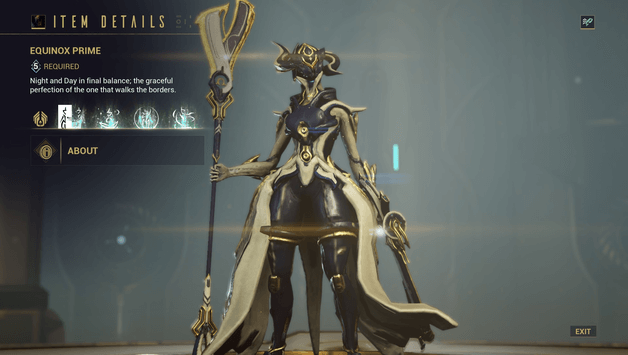 Equinox Prime is the prime variant of Equinox and has a higher amount health, armor and energy. 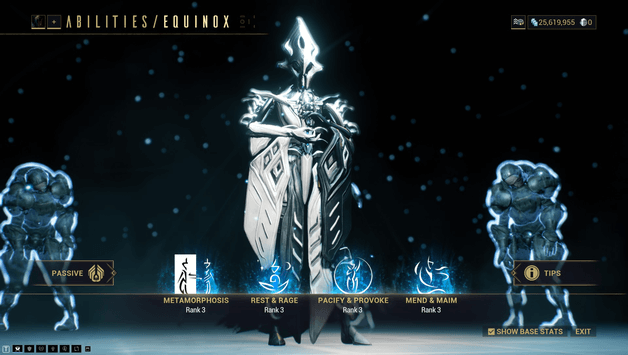 Equinox has the ability to shift between forms, cause enemies to fall asleep or become weak, reduce enemy damage or buff allies, shield allies or deal intense damage to enemies.

His passive ability is Equilibrium, which causes her to gain an additional 10% energy and health when picking up health or energy orbs.

When Equinox also changes into Day/Night form her abilities change. 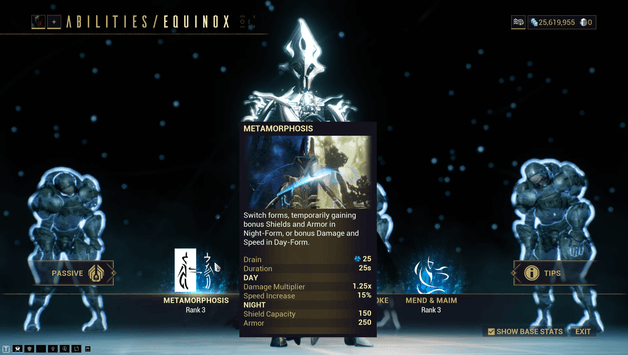 Metamorphosis causes Equinox to change into either Day or Night for which will alter her abilities.

Day Form: Gains a damage and speed increase when changing into day form.

This ability is important when switching between forms to change her abilities depending on which skills the user plans on casting.

It also becomes essential when the user can take advantage of the different effects, making it situational at certain times.

(In the below image you can see Equinox in night form) 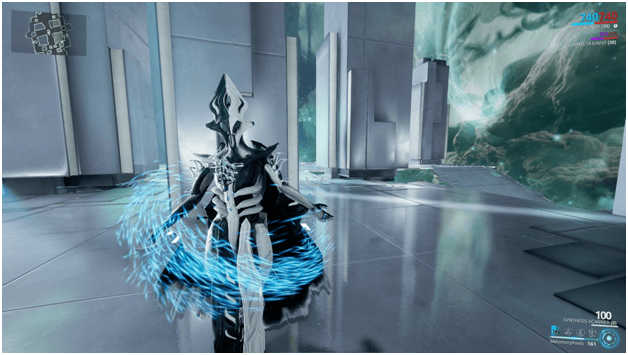 (In the below image you can see Equinox in day form) 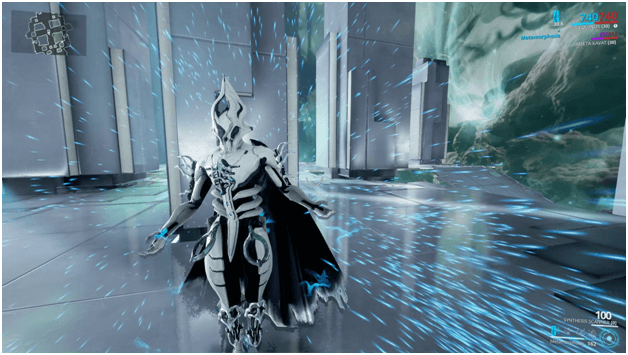 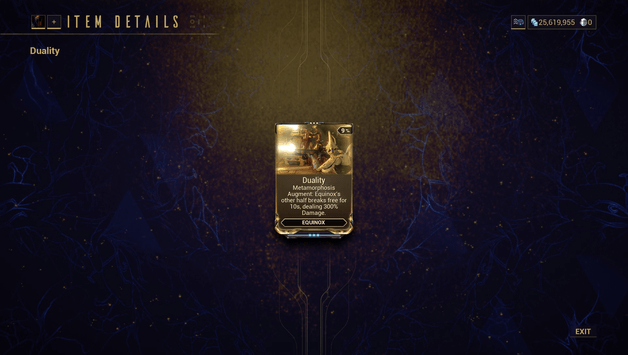 Augment Mod: Causes Equinox’s other self to appear for a duration dealing 300% along with several other increases. 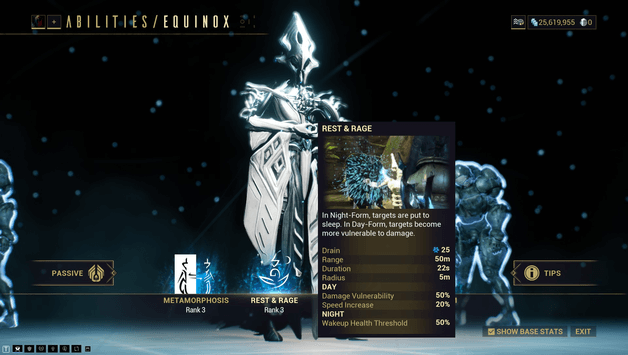 Night Form: Target is put to sleep along with any other enemies within the radius from the enemy that the ability was cast on.

Killing enemies that were unaware during the casting of the ability will result in a stealth kill if killed instantly.

Utilizing this ability can make a huge difference in missions from using sleep to gain high amounts of affinity via stealth kills to dealing crowd control in areas.

Rage will cause enemies to take additional damage from not only the abilities of Equinox, but her allies as well. 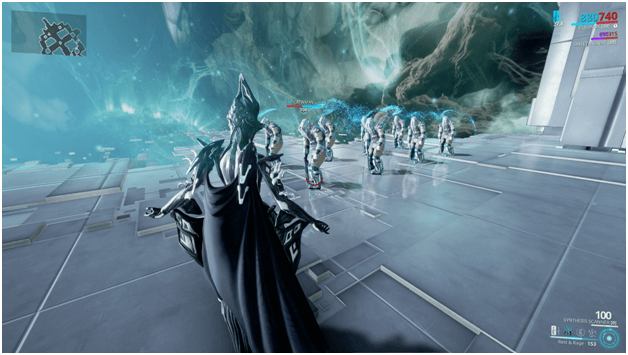 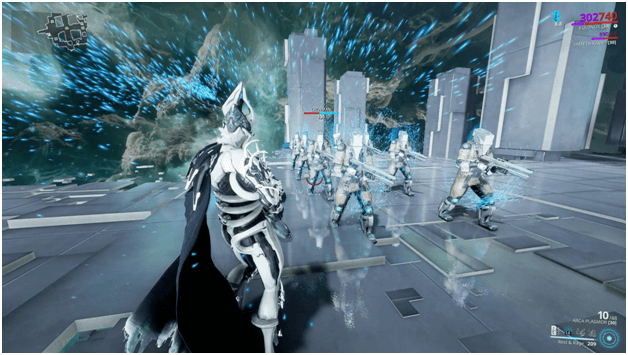 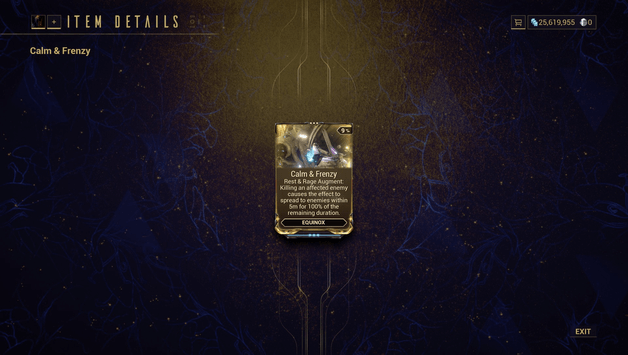 Augment Mod: Killing an enemy will cause them to pass on the Rest & Rage effect they suffer from to their allies. 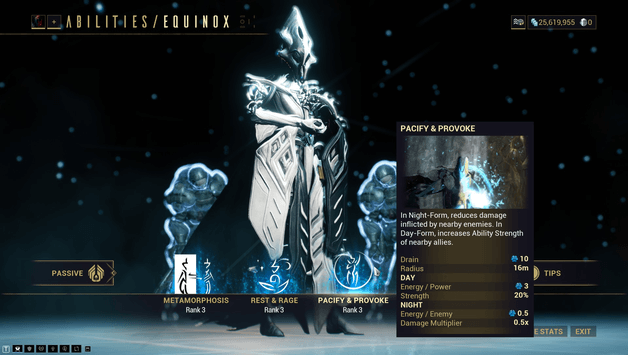 Night form: Drains energy per enemy to reduces their damage.

This ability is good for either weakening enemies so that you and your squad will suffer from less damage or to increase the whole squad’s ability strength to improve abilities. 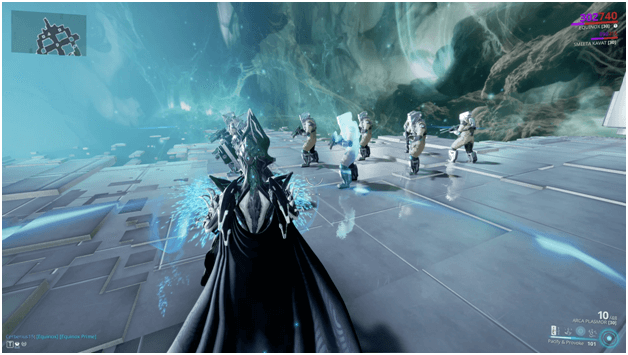 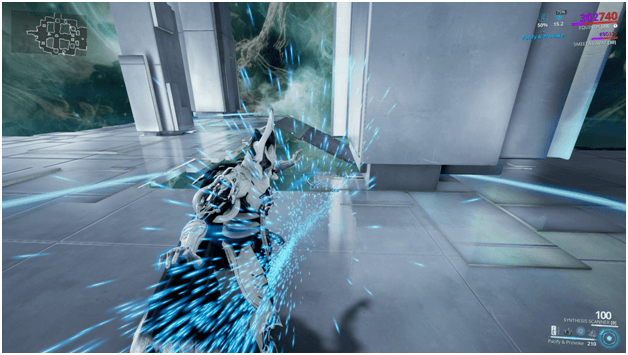 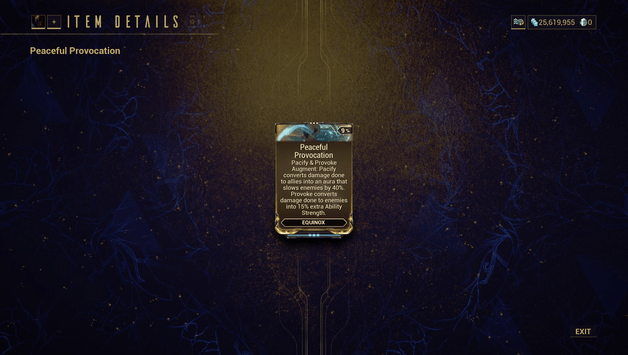 Augment Mod: Slows enemies when allies are damages and increases ability strength when an enemy is killed inside the radius of the ability. 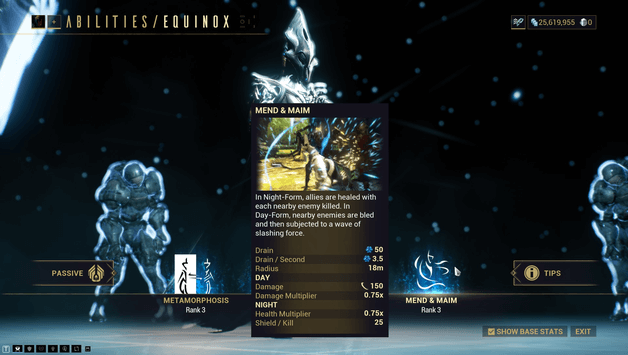 Night form: Heals Equinox and her team based on enemies killed within the ability radius when deactivated.

Day form: Causes enemies to bleed and allows Equinox to accumulate damage based on enemies that die from slash attacks in the area, allowing her to discharge all the damage upon deactivation of the ability.

This ability is great for either healing her team or dealing devastating damage to enemies.

In day form this ability does a good deal of crowd control and gives Equinox an opening which she may use to kill enemies for accumulation of slash damage to be later discharged to enemies in the area. 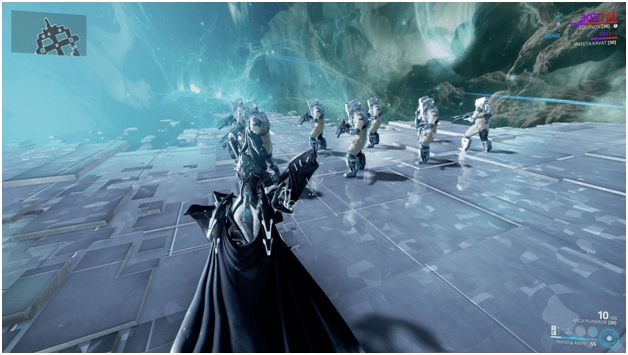 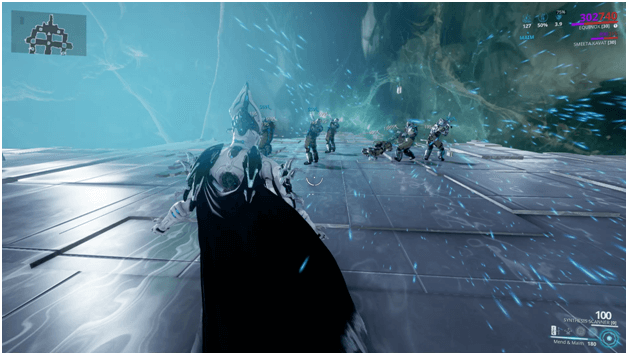 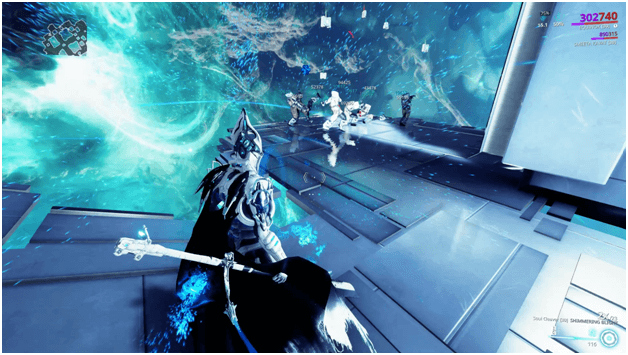 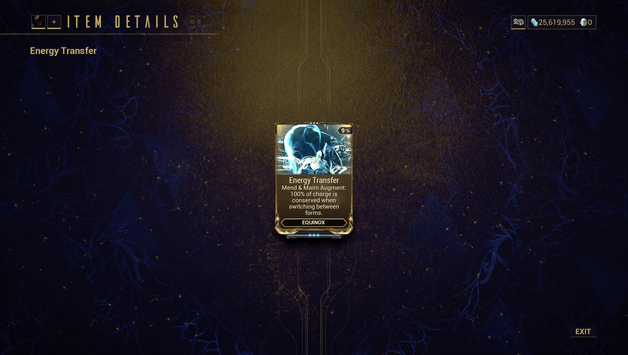 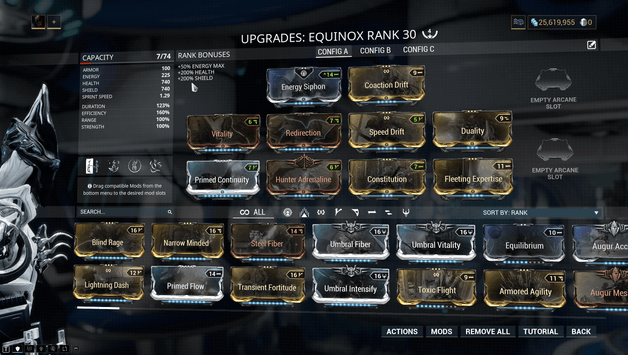 The Duality build focuses on Equinox using her other form along with her to fight enemies.

Her other form will aid her in battle dealing severe damage based on what she has equipped when casting the ability.

The reason Equinox has been given mods to increase her health and shield is to allow her other form to benefit from them as well.

This build works well for many situations from dealing extra damage to groups of enemies or bosses to conquering enemies in arenas or The Index. 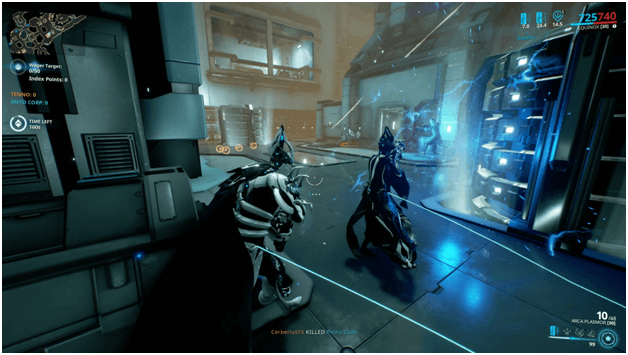 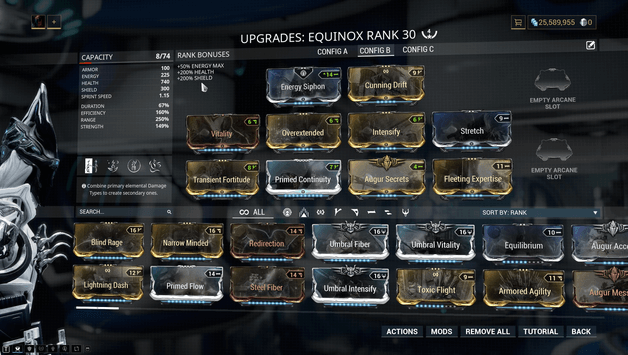 This build focuses on the use of maim where it has a large range allowing it to disable a large area and all the enemies in it causes them to bleed and possibly die, adding to her charge.

Killing enemies with slash, including killing with the ability itself can stack a large amount of damage and when released it can deal devastating damage in a large area.

This build is good for those who like to use slash or melee weapons and will allow them to clear large areas without breaking a sweat.

The not so high ability strength is made up for the increased efficiency allowing a higher amount of slash damage to be stored up.

Crowd control is also given due to the large range. 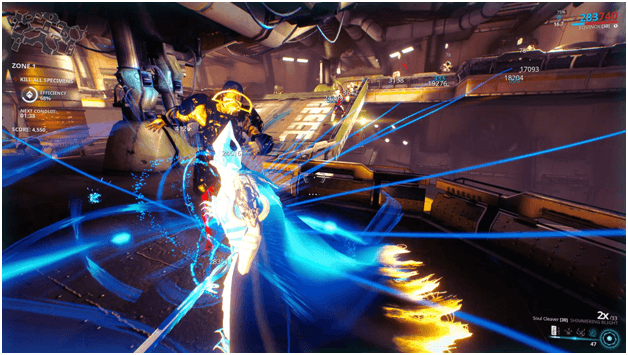 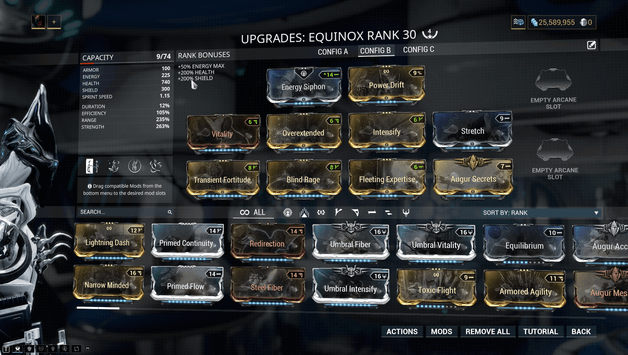 Similar to the previous build except it uses more energy but has higher ability strength for more damage.

This build will increase the damage from the initial bleed effect from the ability as well as grant larger amounts of slash damage charged for the ability.

(In the below image you can see Equinox with maim activated, killing enemies) 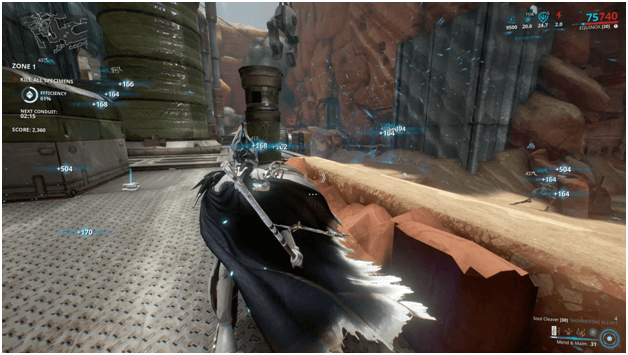 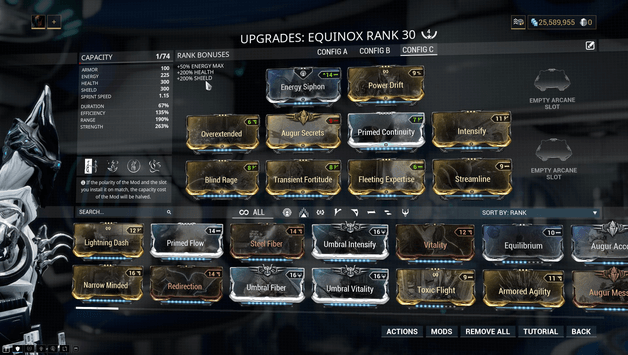 This build is more for support but in certain situations may be used for dealing damage to enemies although its range is somewhat limited.

Allies will have their ability strength greatly boosted causing Warframes to become very powerful when nearby Equinox. 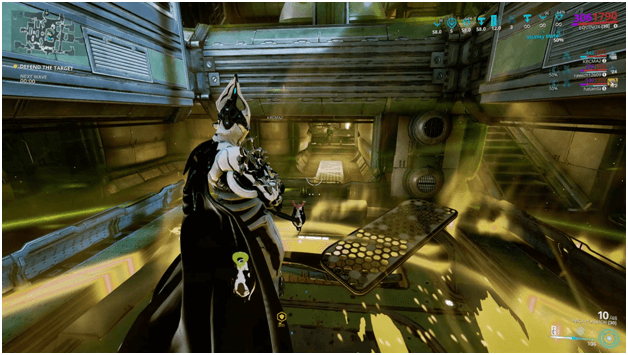 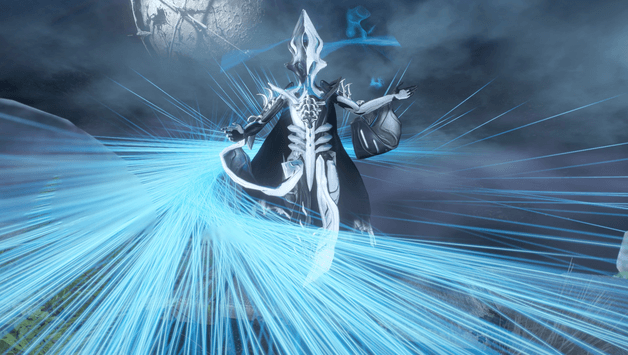 Equinox is a very useful and creative Warframe, depending on the abilities she has and the way the user wishes to use them can determine the outcome of a mission or even speed one up requiring little effort to be done.

When one gets used to using all the abilities, they can efficiently swap between forms as well as cast different abilities, giving them a large amount of control in missions.

Equinox is indeed a unique Warframe and can be used in different types of missions due to her adaptability.