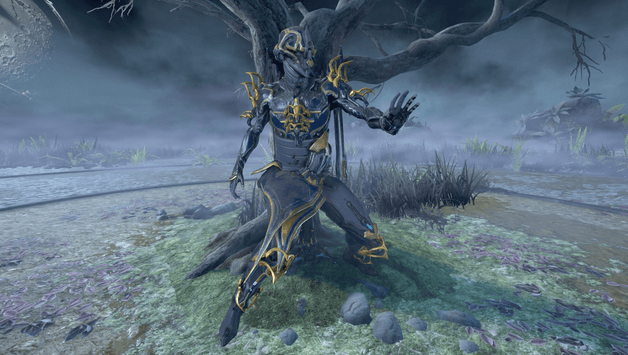 Baruuk is a Warframe who resembles a peacemaker and a monk who is capable of both controlling his himself when it comes to violence but also has the ability to unleash the anger he has been holding back.

He is a Warframe that can fit many roles, given his abilities he is able to deal high amounts of damage and deal crowd control to his enemies and may lead in the frontlines due to his evasion and sturdiness which make him very difficult to kill.

How to Get Baruuk? 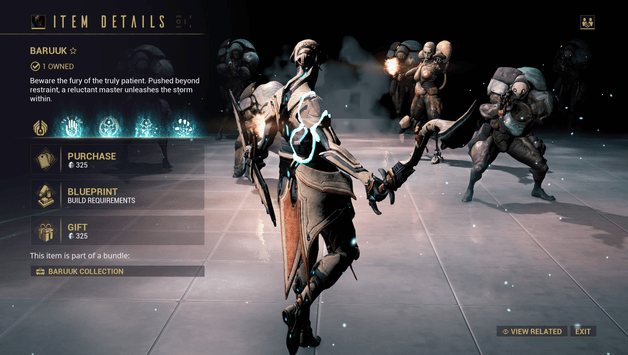 Baruuk’s main blueprint and component blueprints may be purchased from Little Duck who is located in a backroom in Fortuna at the cost of Vox Solaris standing.

You must have a rank of Agent or higher to be able to purchase Baruuk’s blueprints.

It is possible to buy him for 325 platinum on the orbiter to get an already built Warframe. 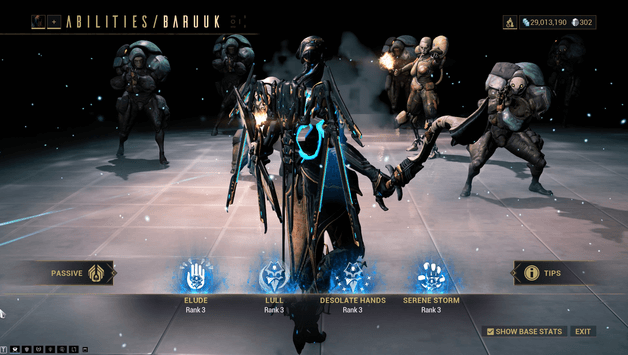 Baruuk is capable of becoming so evasive that bullets pass through him, send enemies into a deep sleep, conjure blades that protect him by attacking nearby enemies and unleashing his inner power using his Desert Wind exalted weapon.

His passive ability grants him a Restraint meter which will increase his resistance to damage 50% at max when the meter is empty.

Abilities used will affect the meter, reducing it and giving him the bonus as well as being an energy supply for his Serene Storm ability.

Using Elude, Lull and Desolate hands and having them affect enemies will grand a certain reduction to the meter which can later on allow him to use his Serene Storm ability, allowing him to use the Desert Wind weapon. 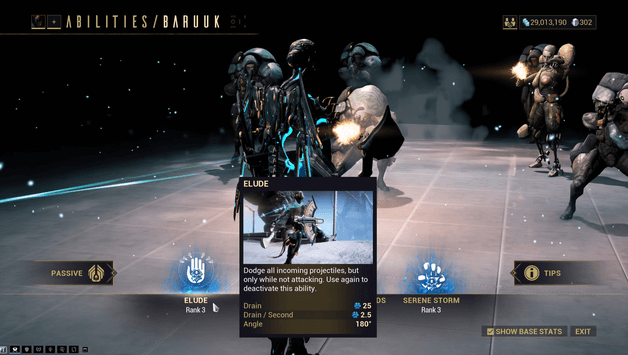 Elude is a toggled ability which has an initial cast time that uses a bit of energy to activate and continuously drains energy until deactivated or until Baruuk has no more energy.

While elude is active, projectiles will phase through Baruuk and will not damage him.

There is a certain angle where he is protected and this must be kept in mind to avoid getting damaged unexpectedly.

This ability is great for survivability allowing him to charge at enemies or back up from a fight as Baruuk may remain untouchable which gives him time to recover, plan his next move or wait enemies out and more.

Elude may be active while the Serene Storm ability is active, giving Baruuk much more survivability.

Having Elude active will double the range of his Desolate Hands ability, allowing the daggers to attack enemies from further away.

Each attack that is evaded will reduce Baruuk’s Restraint by 0.6% 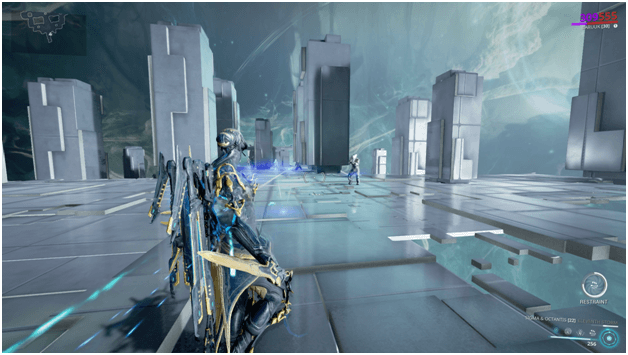 (Enemy projectiles phasing through Baruuk while Elude is active) 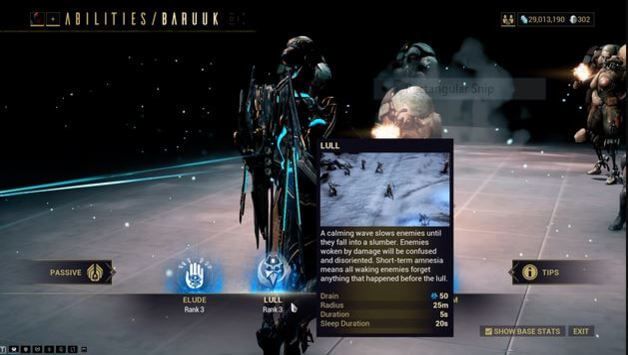 Baruuk sends out a wave in an area that slows enemies then causes them to fall asleep making them vulnerable to finishes and easy to kill.

This ability resets their alert level and can be used to subdue enemies allowing you and your team to have the advantage over them.

This can be a good way for Baruuk to deal some crowd control and will benefit both him and the team when in missions.

Attacking the enemies will wake them up but if they are damage by Desolate Daggers, they will remain in their sleeping state.

Enemies put to sleep will grant Baruuk with a 0.81% reduction to his Restraint. 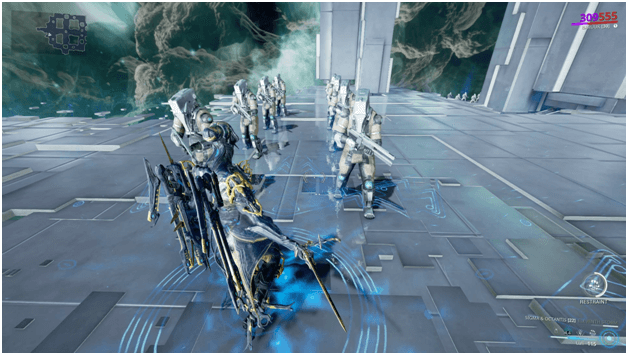 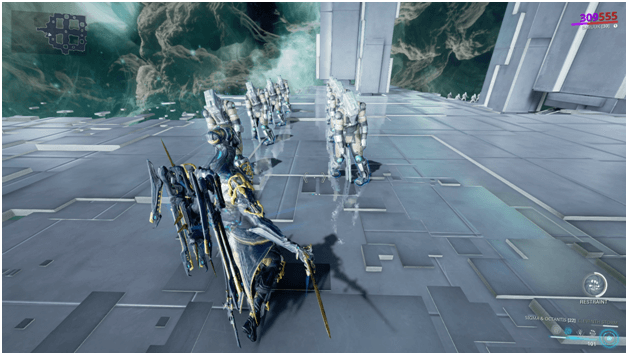 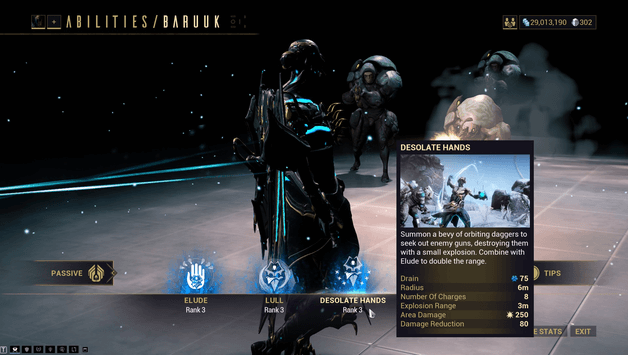 Baruuk becomes surrounded by hovering daggers that give 10% damage reduction each which will seek out enemies within a certain distance which will cause it to launch at them.

The dagger will disarm enemies that are hit and will cause damage in a small area around the target.

The range of Desolate Hand’s daggers will be double when Elude is active.

Restraint will be reduced by 1.6% for each enemy that is disarmed. 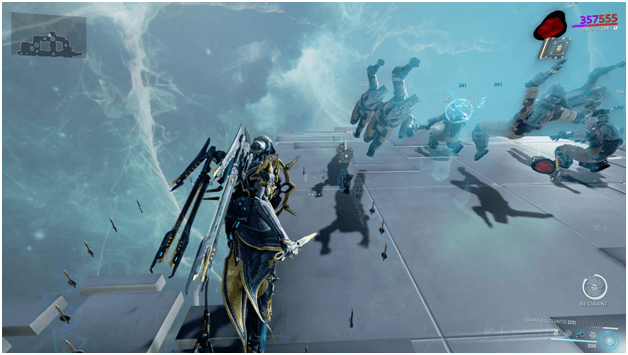 (Baruuk near enemies with Desolate Hands active, damaging them) 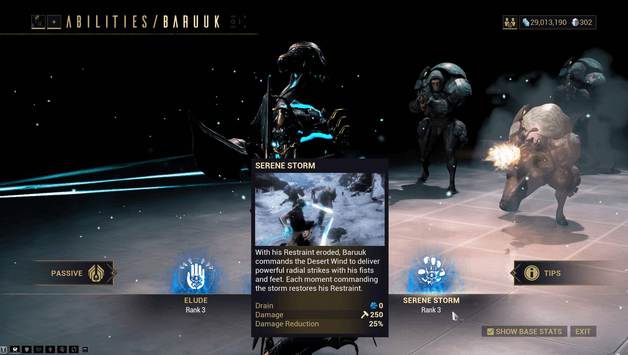 Baruuk unleashes his true power which equips him with the Desert Wind and the empty or reduced Restraint bar as a meter where the less Restraint there is, the longer the ability will be active.

Desert Wind is equipped while this ability is active, granting Baruuk powerful attacks that send out waves at a large distance.

The attacks of Desert Wind have 50% base critical chance along with a 200% critical multiplier and 10% status chance and can be improved by adding mods to the exalted weapon.

There are basically two attacks, the main attack and the waves from the attack which allow a lot of damage up close.

During the ability, Desert Wind has certain bonuses depending on his actions which are:

As the ability is active, Restraint will build back up and when it is at full capacity, the ability will end. 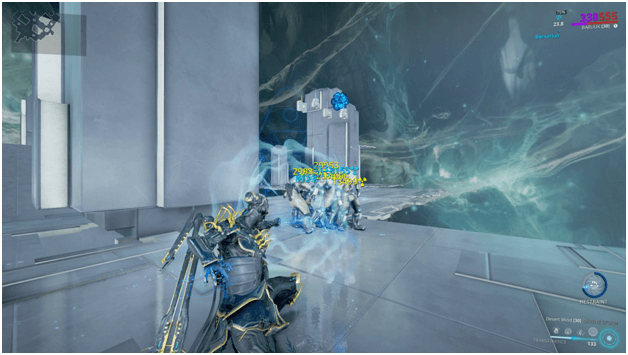 (Baruuk attacking with Desert Wind, sending out a wave) 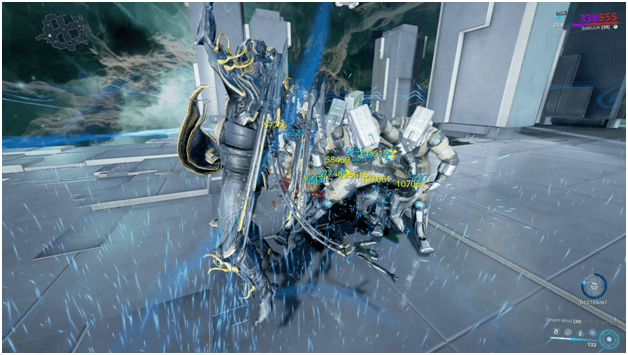 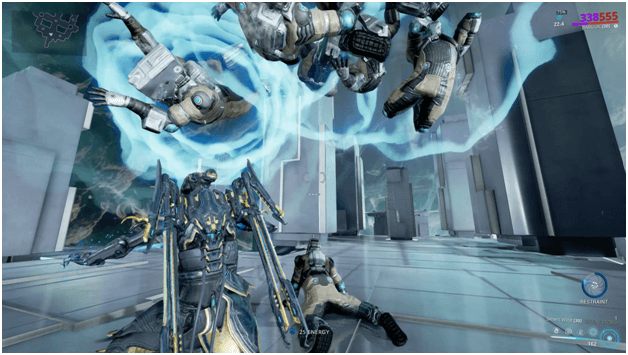 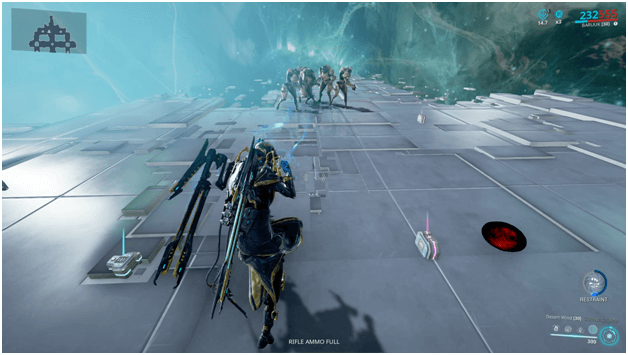 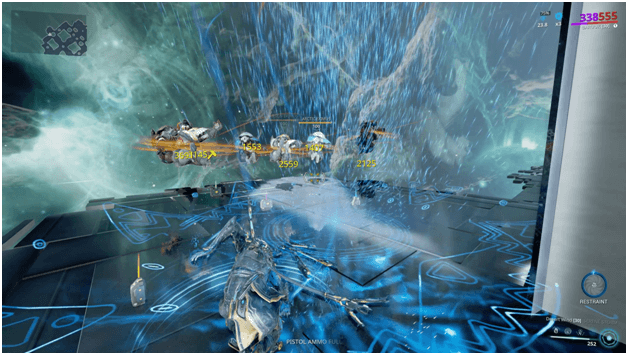 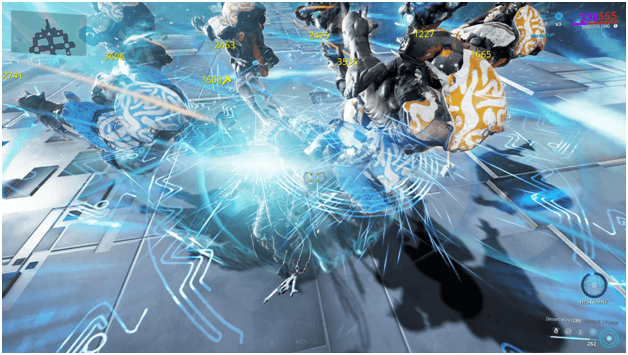 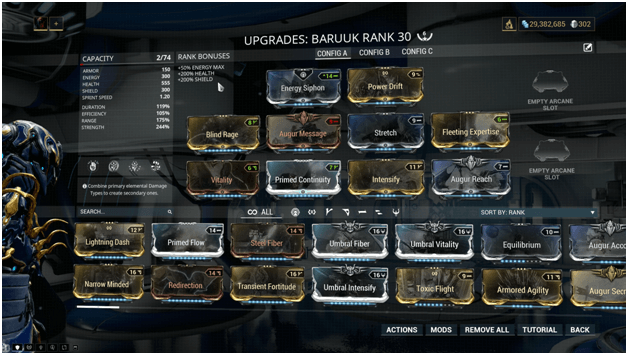 The Balanced Build is focused on allowing Baruuk to use all of his abilities with the comfort of having enough energy and having decent effects.

Duration, efficiency, range and strength are all increased to a decent amount which allows the build to be applicable for several missions.

This is a very basic build and can be utilized by all players to get a feel to the abilities that Baruuk has or for those who prefer a simple build which they can modify later on. 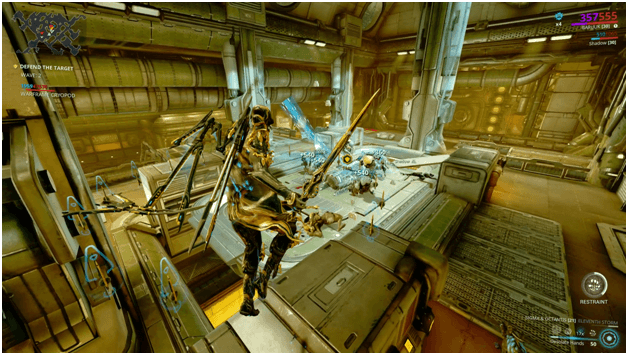 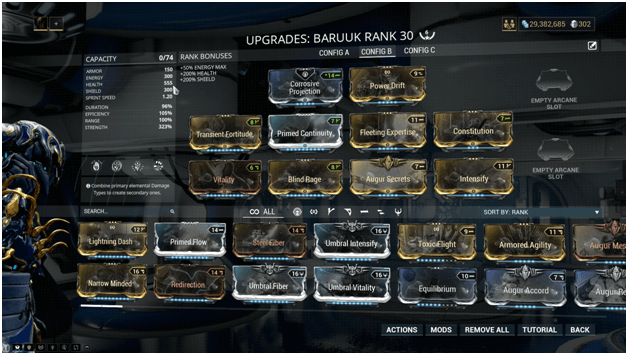 The Strength Build is meant to deal a very high amount of damage using Baruuk’s abilities, giving you a higher damage output with only a small reduction in duration.

Desolate Hands will have more daggers and will give a large bonus in damage reduction along with more projectiles to hit enemies with.

Serene Storm will have more damage reduction as well making it easy for Baruuk to survive while it is active along with other defensive abilities or buffs.

Using this build not only grands Baruuk a high damage output but also gives him more survivability due the increases on the effects of all his abilities. 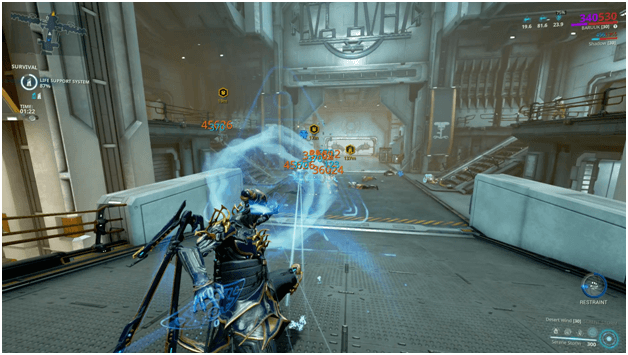 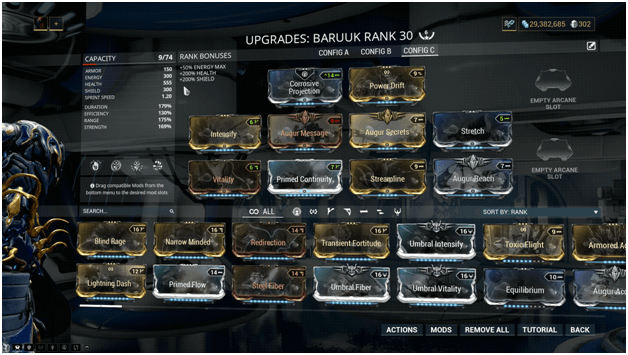 The crowd control can be both a support or utility build which aids Baruuk and his team by being able to slow enemies and put them to sleep.

With an increase range and duration for the build, Baruuk can easily affect a large area with Lull and use any other abilities that can help or continue attacking from there on.

This does not only help with one ability but all as duration and range can affect many of the abilities and this becomes a more strategic build than a straightforward damage build.

Being able to slow enemies and eventually put them to sleep really sets the fight well and can change the situation of missions more than expected. 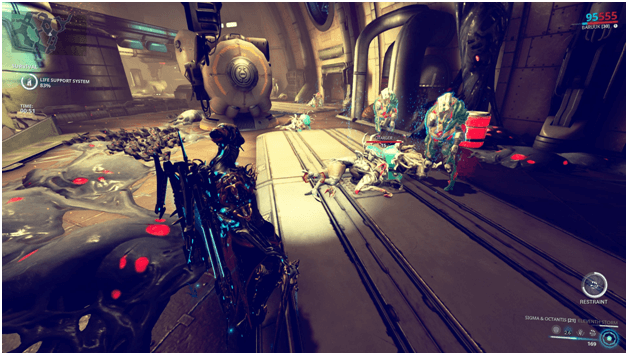 (Enemies under the effect of Lull) 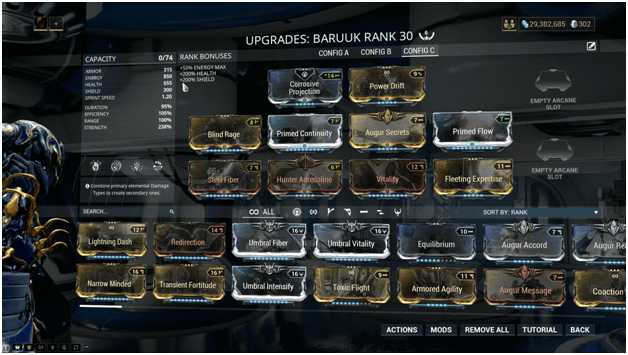 Bruiser build is more of a survivability build for Baruuk, allowing him to use his abilities to a certain extent while remaining sturdy.

It also allows him to keep his Elude ability active longer and along with his other abilities, this build can be used either recklessly or strategically.

This is considered similar to the balance build but more advanced and focused on melee or very intense frontline combat. 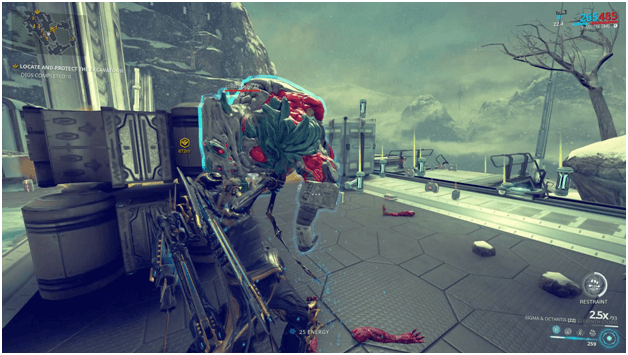 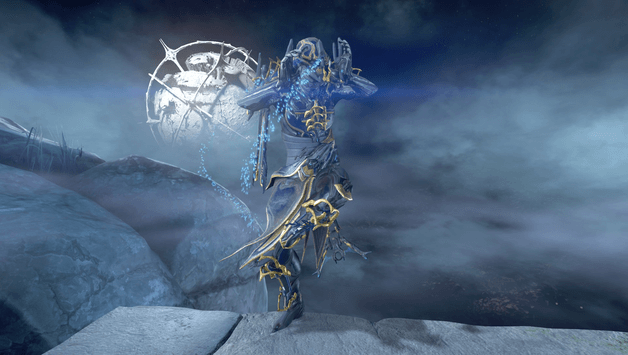 Baruuk can be seen as a pacifist with a little hidden dark side as he mainly focuses on being a Warframe bent on avoiding damage or preventing enemies form attacking.

Regardless of what playstyle is preferred, Baruuk is a pretty useful Warframe, especially when modded well as he is capable of absorbing a lot of damage as well as dishing it out.

His abilities make him very strong and his Serene Storm ability pretty much tops it off as it does a high amount of damage, affects and area and more.