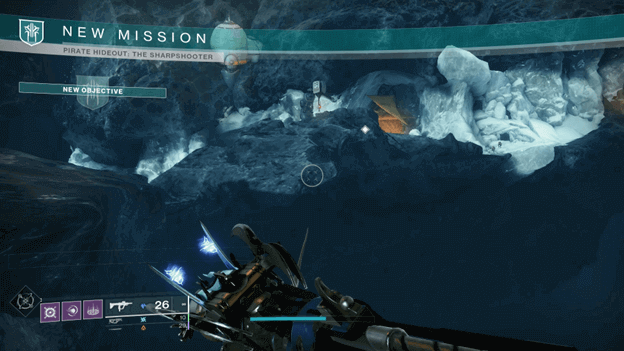 The Pirate Hideout of Iriks the Sharpshooter has been located after a previous Expedition you participated in on Europa.

It is time to hunt down this pirate and seize a relic that they have uncovered to take it back to the H.E.L.M. for Eido to research.

You will need to infiltrate the Pirate Hideout and fight your way through the enemies, defeating Iris in the process as you search for the relic.

How To Unlock Pirate Hideout the Sharpshooter?

You will be able to start the Pirate Hideout the Sharpshooter mission once you have reached step 13 in the Sails of the Shipstealer Seasonal Quest in Season of Plunder. 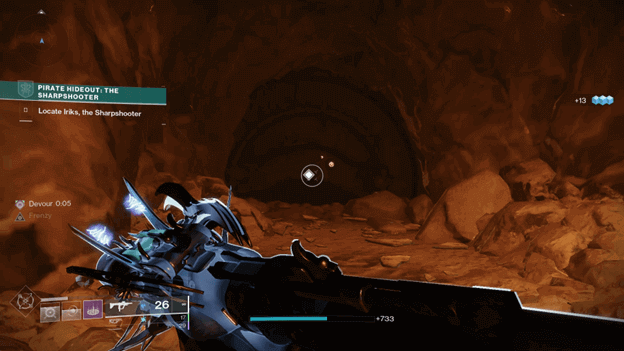 Upon arriving at the location of Iriks, the Sharpshooter’s hideout, you will need to make your way towards the entrance.

Fight your way through enemies near the entrance and make your way towards the door.

Clear out any enemies in the area and make your way towards the door to open it using your Skeleton Key by interacting with it.

Push forward into the hideout and fight your way past the enemies as you continue your search for Iriks, the Sharpshooter.

As you come nearer to where Iriks is located, continue making your way inside and you will reach their hoard room. 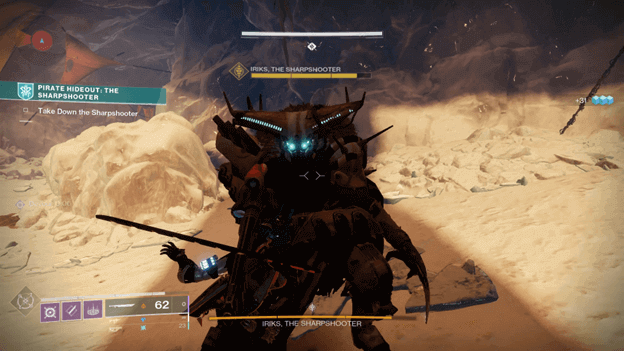 5) Take Down the Sharpshooter

Iriks, the Sharpshooter will begin to attack you right away and you will need to make use of cover as you fight him along with the other Fallen enemies in the area.

You will need to destroy the Spotter Shanks (there are 2 of them) that are near him in order to make him vulnerable to your attacks.

Once you take down 1/3 of his health, he will become invulnerable until you defeat the more Spotter Shanks that spawn in the area.

Continue damaging his health again until you have reduced it by 2/3 and he will become invulnerable for a short amount of time.

You will then be able to continuously fight him until you have completely depleted all of his health and afterward, you will need to deal with any stragglers.

Pick off the remaining members of Iriks’ crew and afterward the relic nearby will no longer be protected by a barrier.

Approach the relic and interact with it so that you can take it back with you, ending the mission while also prompting some dialogue.

Picking up the Relic will conclude the mission.

Completing the Pirate Hideout the Sharpshooter will reward you with some Glimmer, a legendary piece of gear from Season of Plunder. Additionally, you also get the Relic needed to complete the Antiquarian II Seasonal Challenge. 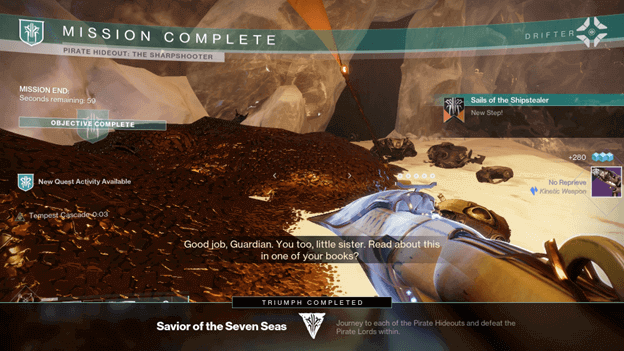 You have successfully taken the relic that Iriks, the Sharpshooter, and his crew have retrieved while taking them out in the process.

Now Eido will be able to analyze this piece from the old antiquities and update you on any secrets that it holds within.

You may turn in the relic at the H.E.L.M. to complete one of the seasonal challenges and get Repute as a reward for it.