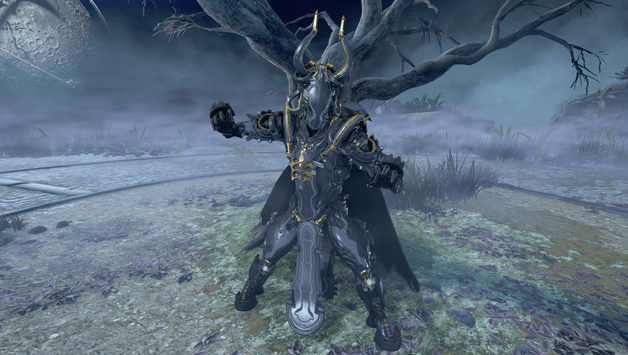 Oberon is a paladin-like Warframe who uses his abilities to heal and protect his allies while also using them to damage and disrupt his enemies.

He is great for both supporting and being a main role due to his abilities giving him an upper hand in several situation while mainly focusing on keeping everyone alive and causing crowd control.

How to Get Oberon? 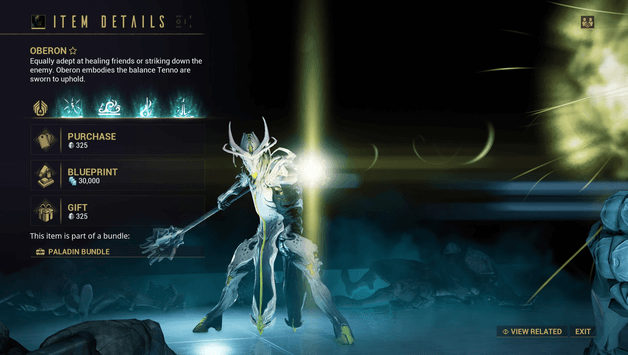 Oberon’s parts can be obtained as loot when Eximus units are killed during missions, each Eximus unit has a small chance to drop a part.

His blueprint may be purchased from the Ingame market in the orbiter for 30,000 Credits.

Oberon may also be purchased fully built from the Ingame market for 325 platinum. 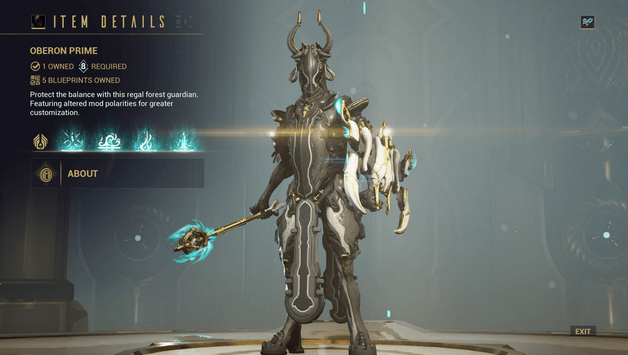 Oberon Prime is the prime variant of Oberonand sports a higher amount of armor and energy.

Check It Out Abilities of Other Warframes 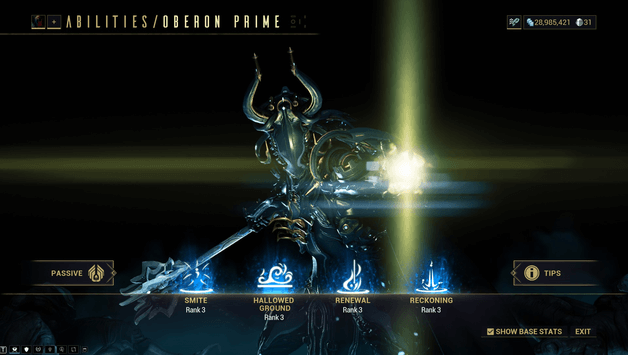 Oberon has the ability to send out energy to damage multiple enemies, conjure righteous fire to damage and confuse his foes, heal himself and his allies and lift enemies then slam them into the ground.

His passive ability boosts the health, shield and armor of pet companions as well as gives his own an instant revive once every mission. 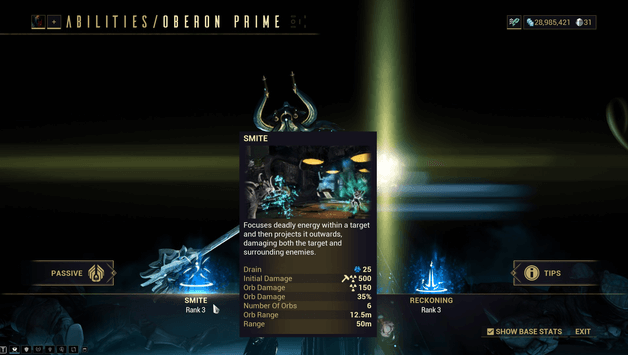 Oberon sends a projectile that damages an enemy and applies a radiation proc which splits into a certain amount of orbs that damage other enemies based on the health and shields of the main target.

This ability is great for offense and can clear enemies quickly due to the multiple projectiles that spread after the first impact which make this a great ability for dealing damage and applying a radiation proc to an enemy.

The range of the ability gives you an advantage letting you position and time the ability right to strike several enemies and even choose the right target to maximize the health and shields based damage. 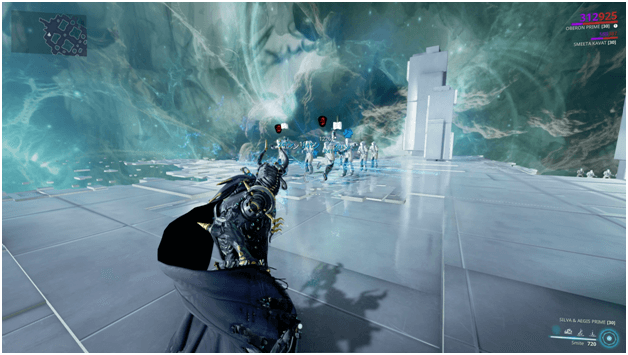 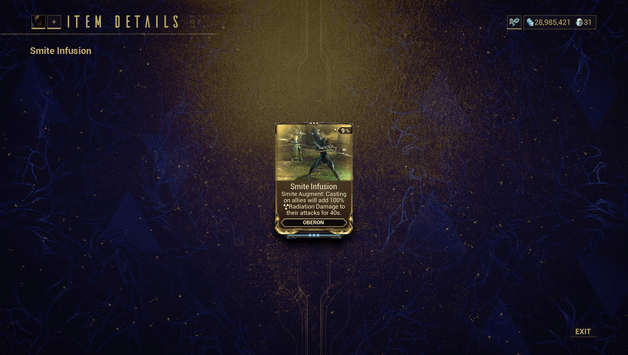 Augment Mod: Smite Infusion allows Smite to be cast on allies which gives them an additional 100% radiation damage for 40 seconds. 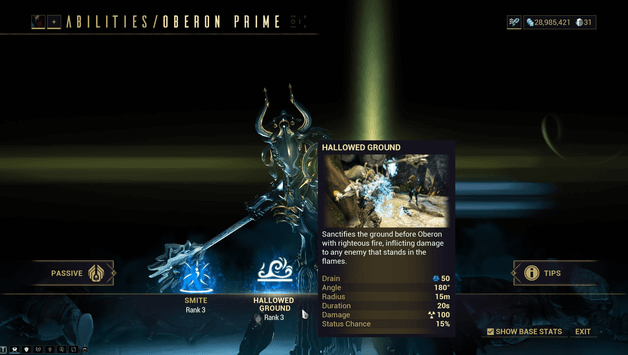 Oberon causes the ground in to burn with righteous fire, dealing damage to enemies with a chance to proc the radiation status effect.

This ability is great for both dealing damage to multiple enemies as well as dealing crowd control and better yet due to the radiation proc, enemies will eventually end up fighting each other.

When Renewal is cast, allies will gain a buff that increases armor as long as they are in the area of effect of the ability (buff remains for a period of time if Renewal is deactivated). 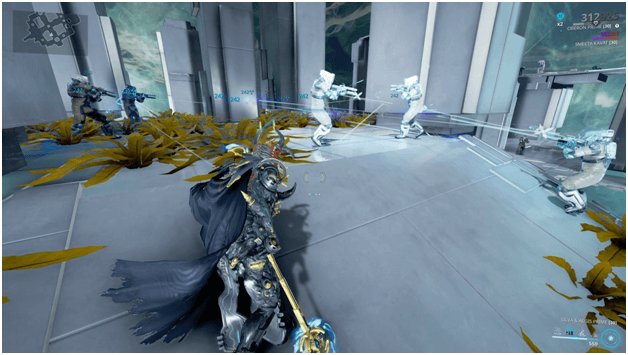 (Enemies fighting each other after being affected by Hallowed Ground) 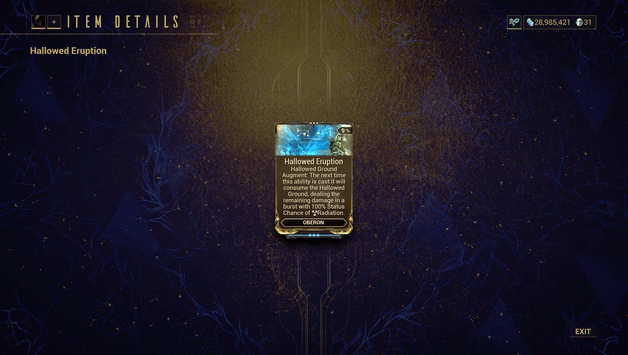 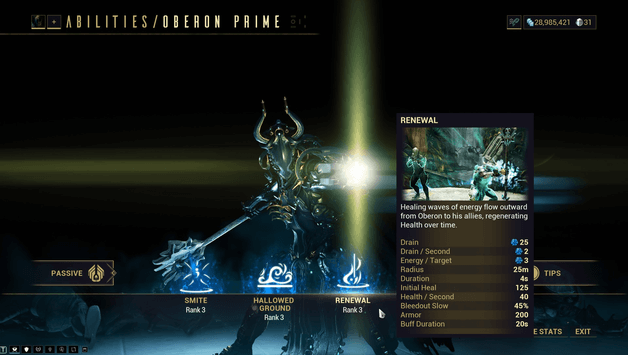 Upon activation, Oberon will consume his energy to restore life of himself and his allies at the cost of energy every time someone is healed.

With this ability, Oberon can increase the survivability of himself and his team making missions have a better chance of success as well as reducing the chances of allies dying.

Casting this during Hallowed Ground will give a buff to the armor of you and your allies which remains until Renewal is deactivated which will cause the buff to remain for a certain amount of time. 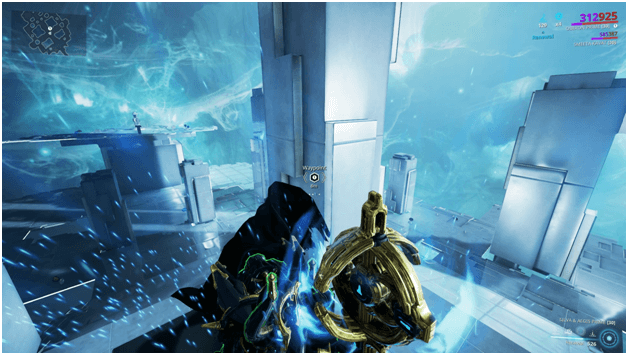 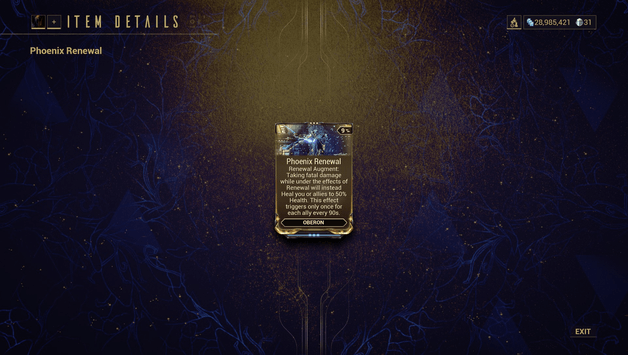 Augment Mod: Phoenix Renewal causes you or your allies to heal with a cool down of 90 seconds. 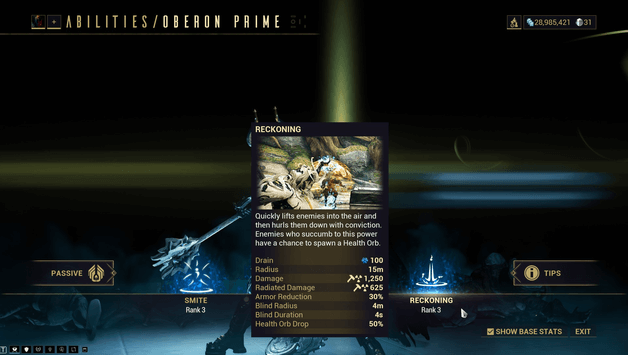 Oberon uses his energy to lift enemies up into the air then slam them into the ground, dealing radiation damage.

When enemies are killed by using this ability, there will be an increased chance that they will drop a health orb.

Any enemies still alive after Reckoning is cast while standing on Hallowed Ground will have their armor permanently reduced making it easier for them to kill.

Enemies that are affected by the radiation status effect will take extra damage and those who survive will additionally cause nearby enemies to be blinded for a short period of time.

Reckoning is a great ability and can be used in several situations as it does a great deal of crowd control as well as damage which can quickly turn the fight around when facing multiple enemies. 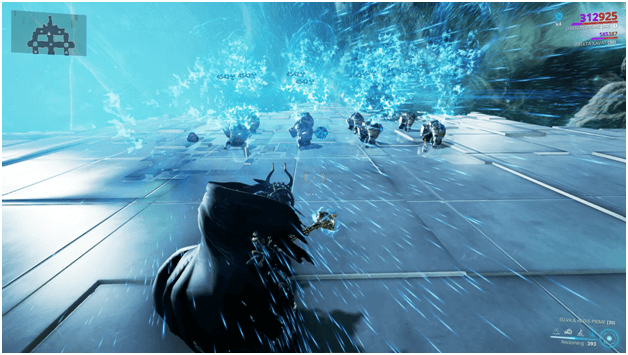 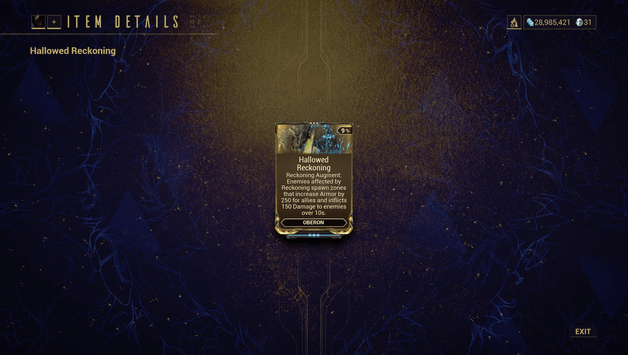 Augment Mod: Hallowed Reckoning will cause enemies to leave behind an area that will increase armor for allies by 250 and deal 150 damage to enemies for a duration of time. 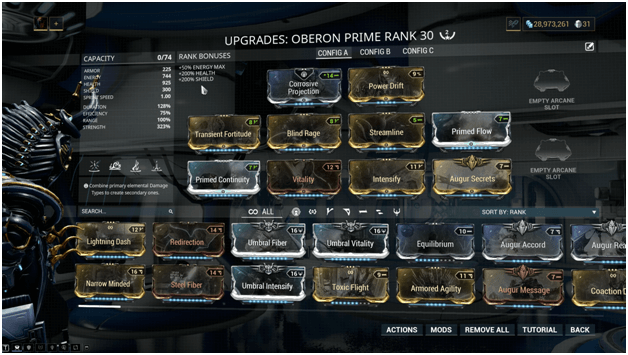 The Strength Build focuses on dealing as much as damage as possible with Oberon’s abilities allowing him to clear enemies quicker and have a boost with other percentages that rely on his ability strength.

The duration of Oberon’s abilities will be increased slightly while the range remains the same.

A small downside to the build is that his abilities will cost a bit more when being cast but this is made up for by the immense amount of damage that he can deal.

Smite will unleash more orbs upon hitting the primary target, allowing you to hit several enemies with the ability.

Hallowed Ground will deal more damage and have a higher status chance along with a slight increase in duration.

Renewal will heal allies for more health and reduce bleedout speed while granting a higher armor buff when the buff is granted along with the energy per second and per target will being reduced.

Reckoning will gain a severe boost in damage while reducing the armor of enemies at a very high percentage along with the blind duration slightly increased.

This build is great for deal immense amounts of damage and causing enemies to become very weak and have a high chance of being affected by radiation proc. 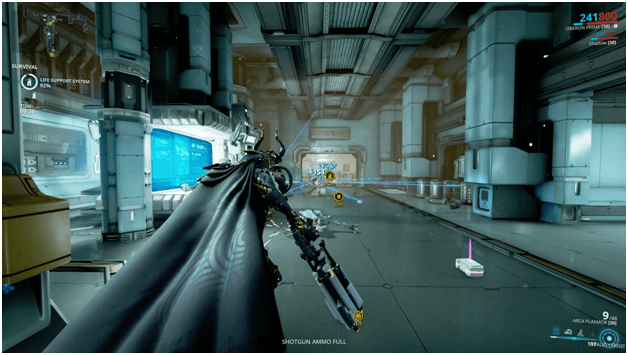 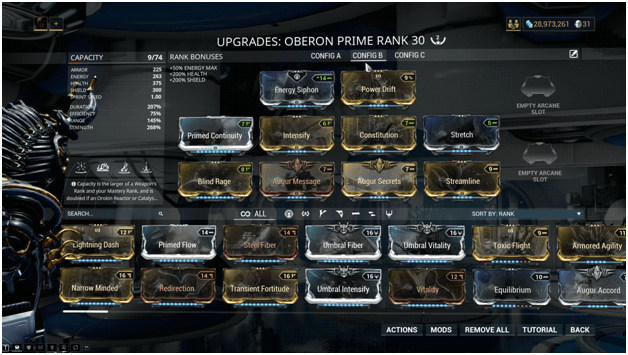 The Duration build is meant to have as much duration as possible without affecting the range of the build while still retaining a good amount of ability strength and range.

This bid similar to the previous, suffers from a decreased amount of ability efficiency but is made up for by the other stats that affects the abilities.

Smite will have increased damage and the range of both casting the ability and the orbs range will be increased.

The duration of Hallowed Ground will be greatly increased with a decent increase in the angle and radius of the area covered with righteous fire.

Renewal will cost even less energy per target healed and will affect a larger area from Oberon allowing him to heal allies further away from him.

Reckoning will have a slightly increased range on both the radius around where enemies are lifted as well as the range of the blinding effect they create on impact with an increase in the duration of the blind effect. 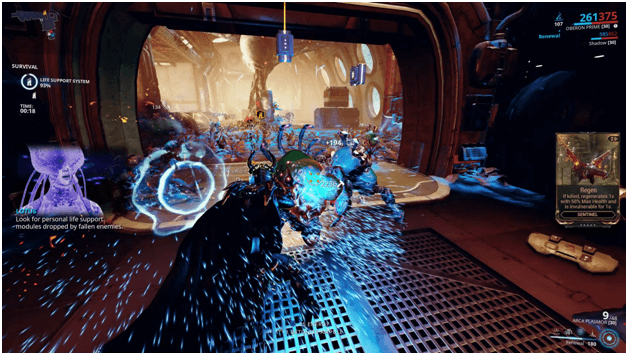 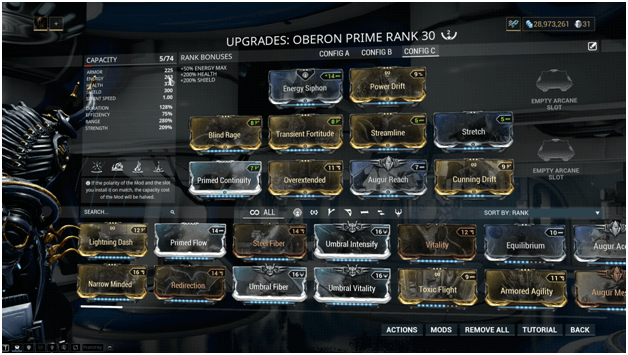 The range build aims to give Oberon a huge increase in range to allow him to cast his abilities from a great distance as well as have a huge area of effect with is abilities.

Similar to the other builds, efficiency is decreased but is made up for with the decent amount of range, duration and strength of the build.

Smite will have a greatly increased range for both the casting of the ability as well as the orb range with still a decent amount of damage and number of orbs.

The angle of Hallowed ground will be greatly increased as well as the radius of the ability allowing it to hit multiple enemies.

While having a low drain in energy over time, Renewal will have a larger range allowing you to heal allies even further away than in the other builds.

Reckoning will have an even larger radius allowing it to affect several enemies further away from Oberon while still dealing a good amount of damage and having a decent effect after the ability is cast.

This build give Oberon more crowd control against enemies and allows his abilities do deal a lot of damage to enemies that are spread out more. 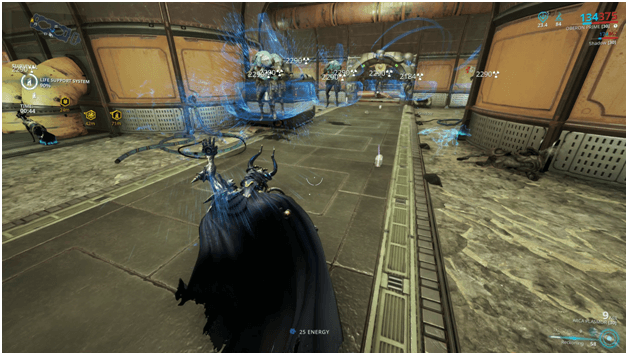 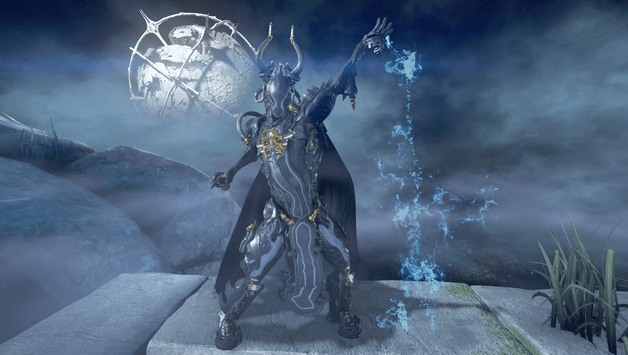 Oberon is considered the paladin Warframe due to his abilities to heal his allies, protect them and damage enemies with his abilities.

All of his abilities deal radiation damage which make him efficient when it comes to damaging enemies weak to radiation as well as having a high chance of getting a radiation proc against enemies.

Due to his abilities causing enemies to be affected by the radiation status effects, Oberon can last longer in missions, forcing enemies to fight each other giving him and his team an advantage.

This Warframe performs exceptionally as a support, damage dealer or both and provides a large benefit for his allies in missions.

The survivability of the team is greatly increased due to the crowd control that Oberon can provide as well as the healing and protective abilities that he possesses.

For those who want the paladin role in Warframe, Oberon is definitely a Warframe that you should try out.