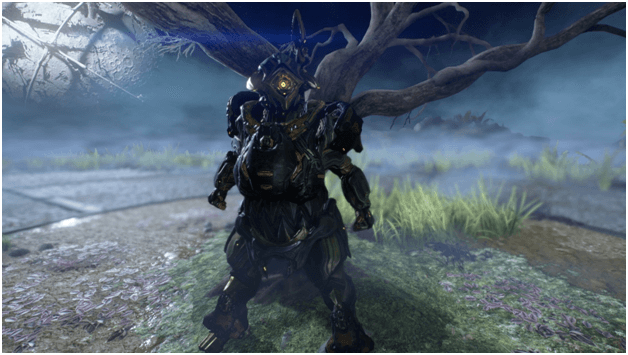 Grendel is a monstrous Warframe that consumes it foes and uses his hunger and gluttony to change the situation of a fight towards his liking.

He is a very durable Warframe that can continuously consume enemies and devour them to empower himself or allies as well as become an unstoppable force. 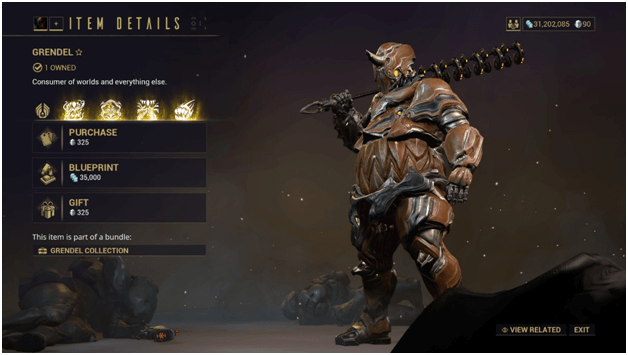 Grendel may be obtained by hunting for his parts after acquiring their locators which may be purchased for 25 vitus essence each from the Arbiters Of Hexis via the Arbitration Honors NPC.

Each locator will lead you to one of Grendel’s parts which means you will need to get 75 vitus essence in total to acquire all the parts if you are hunting them alone.

You may purchase his blueprint from the market inside the orbiter for 35,000 credits.

Grendel may also be purchased for 325 platinum to get an already built Warframe. 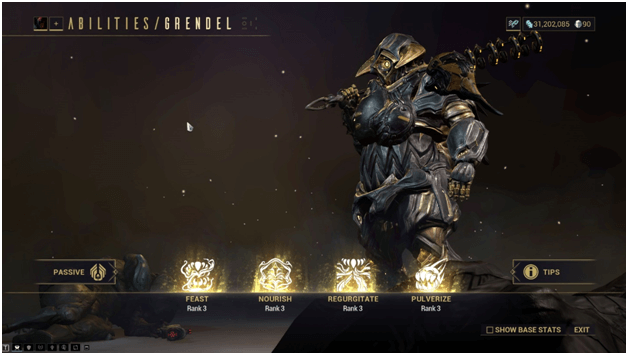 Grendel has the ability to swallow enemies whole and spit them out, munch on enemies that are in his belly to buff him and his allies, spit out an enemy soaked in his bile, and turn into a ball that can roll into enemies and knock them out of his way.

His passive ability Glutton allows causes him to gain 50 armor per enemy that is inside his belly and all of the enemies will be damaged whenever he is damaged. 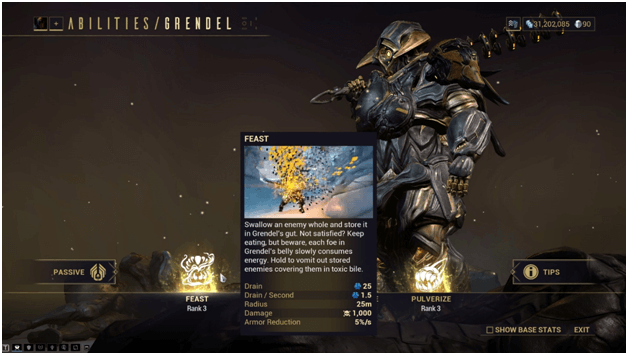 Grendel’s belly opens up and sucks enemies in front of him, placing them inside his belly which add to his armor due to his passive and cause them to take damage as Grendel is damaged.

Holding the ability will spit the enemies out, dealing damage and inflicting the toxin status effect as they are tossed in front of Grendel.

This is good for his passive as each enemy will give him 50 armor which makes him even more durable and the enemies in his belly provide a stock for using his other abilities. 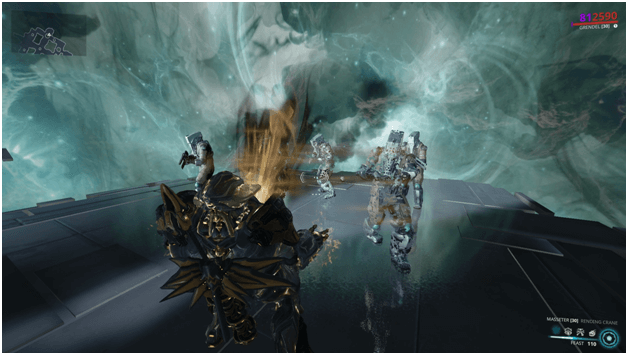 Enemies will be sucked towards Grendel and will begin to disappear, placing them in his stomach until further action. 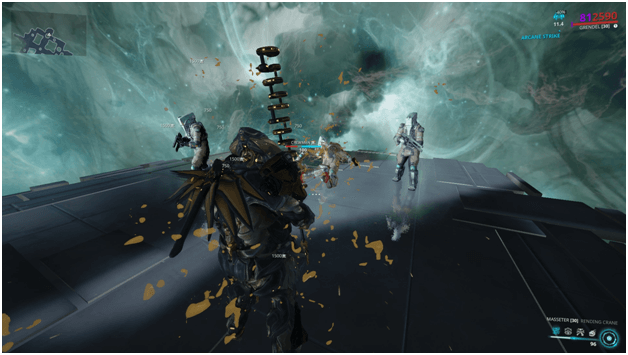 (Grendel releasing enemies from his belly)

When Grendel spits the enemies in his belly out, they get thrown with such force that they end up in a knocked down state, allowing you time to attack them further. 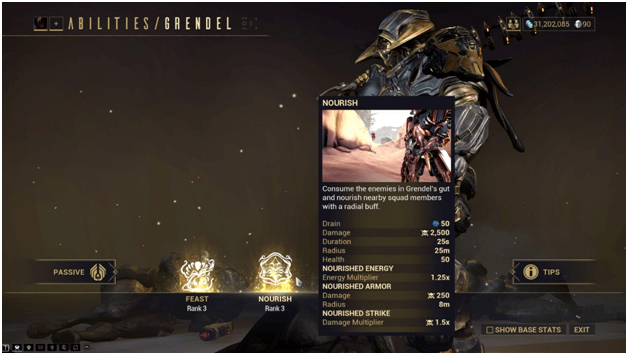 Grendel begins to consume an enemy in his belly, damaging them or even killing them to provide a buff for himself and his allies.

Those nearby will get a one of three buffs depending on the enemy that was consumed, giving either an energy multiplier, increased damage as toxin or additional armor.

This is a great way to buff himself and his team increasing either survivability adding a good amount of offense. 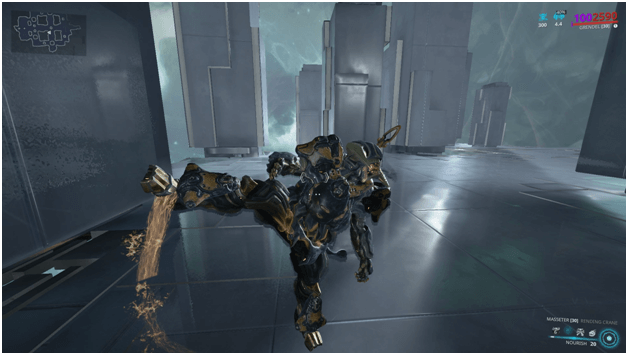 Grendel will do a stomp animation when casting his nourish ability which consumes an enemy or damages them the moment the stomp begins. 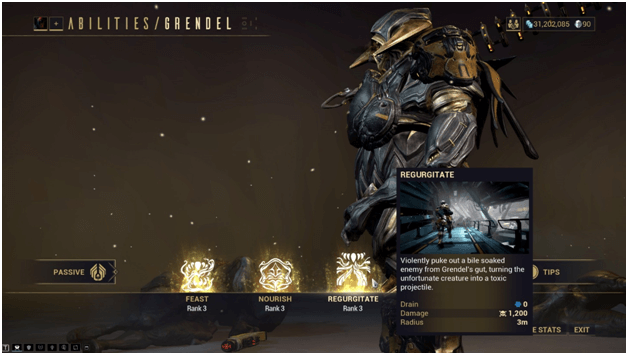 Grendel covers an enemy with bile and spits them at where the you are aiming, launching them forward and dealing damage to an area.

This is strong offensive ability which can do a good deal amount of damage to both the enemy and those within the area where the enemy is launched. 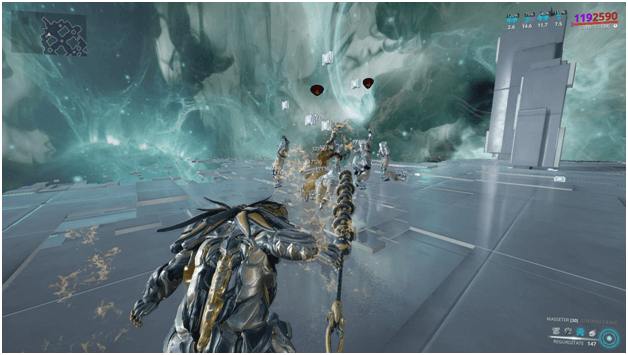 The enemy will be spat out where your reticle is aimed and an enemy within your belly will be released as the projectile. 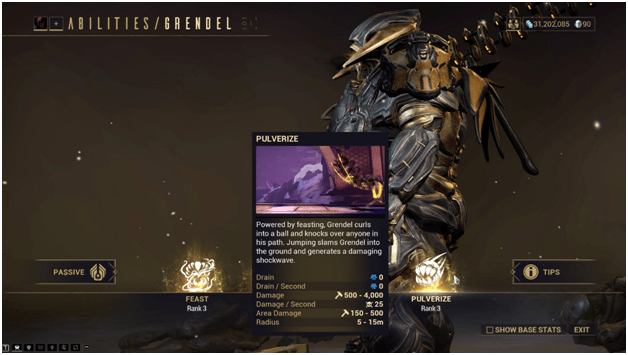 Grendel transforms into a ball and begins to roll in the direction that you hold your movement keys, damaging any enemies that he collides with based on a radius around the ball.

Enemies will be knocked back when he collides with them while other enemies inside his belly will constantly take toxin damage.

Jumping and landing will cause damage in an area where the ball during such movement.

This ability is great for both dealing damage and crowd control as it can knock enemies down, making them vulnerable as well as deal a great deal of damage to those in Grendel’s belly. 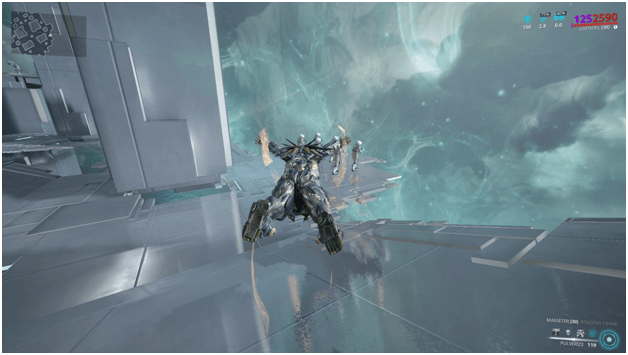 Grendel will leap first before transforming which is a short animation before he will transform into the ball. 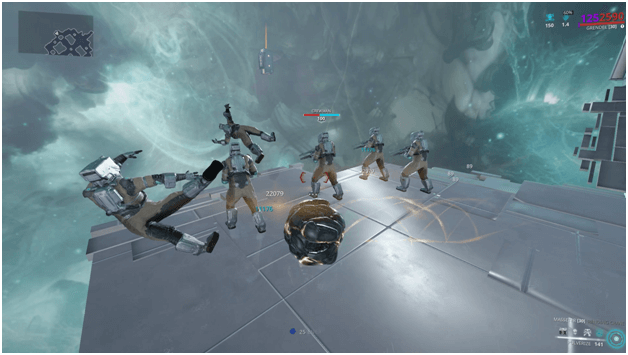 Rolling will knock enemies around which can repeatedly be done to keep enemies from being able to attack you or your team. 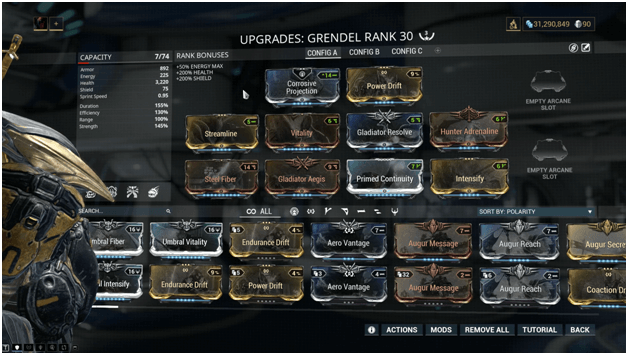 The Bruiser Build is meant to allow last long during missions and take on a ton of damage without using his abilities at first.

This allows him to become even stronger once his buffs are used and makes him more durable when fighting enemies.

With the addition of the Gladiator mods, his melee fighting is improved which works well with those who do a lot of melee combat, especially those who focus on critical builds.

Grendel will still have an increase with ability duration, efficiency and strength which improve all of his abilities. 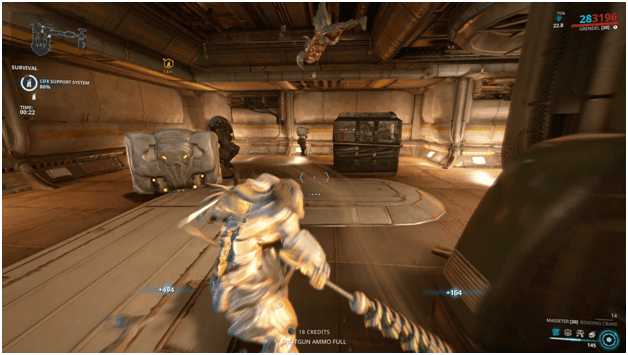 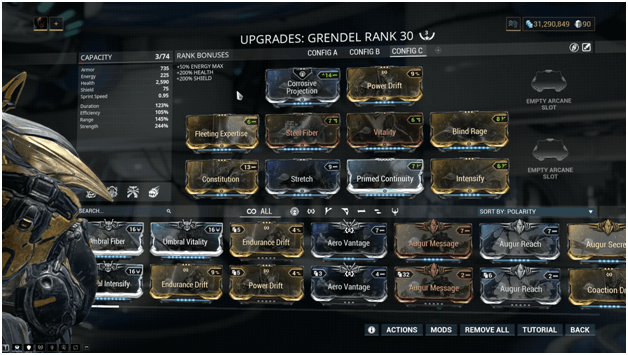 This build gives a good increase for all of Grendel’s ability stats, allowing him to use all of his abilities with all of them having increased effects.

Grendel will be able to use his abilities sparingly as well as his buffs will give a pleasant boost to him and his allies.

Using this as a starter build is great for those who want to test out Grendel or play in a more balanced manner. 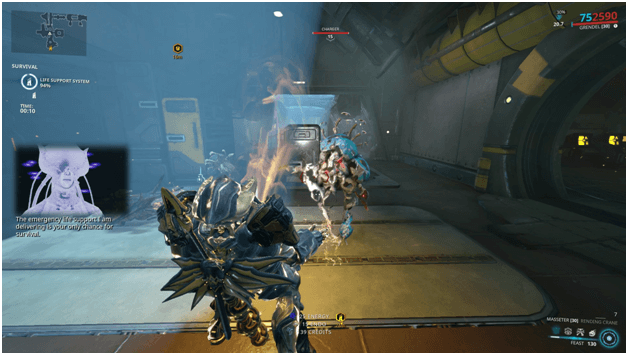 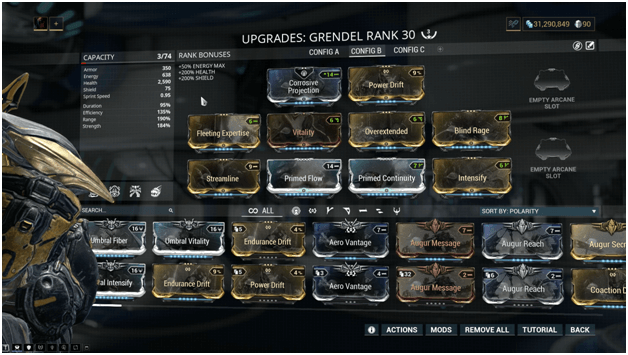 The Nuker build allows Grendel to use his abilities more often due to high amount of energy and increased energy efficiency.

A good deal of damage can be dealt with the increase of his ability strength which allows him also to use Feast on several enemies along with Regurgitate as means to using them as projectiles.

Grendel will also be able to buff his allies from time to time but this will last a little shorter when it comes to duration but can cover a large area making it suitable for casting during the moments when needed.

When using his Pulverize ability, Grendel can have it active longer since it will use up less energy and since he has a large energy pool. 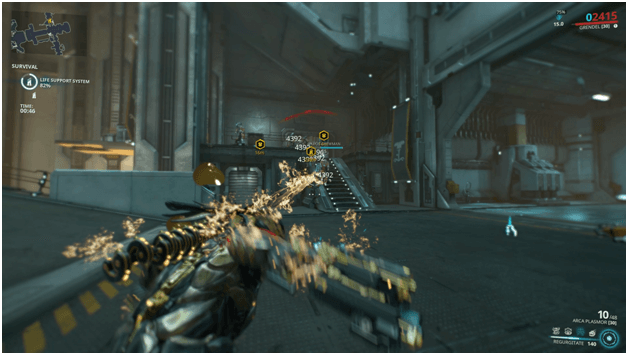 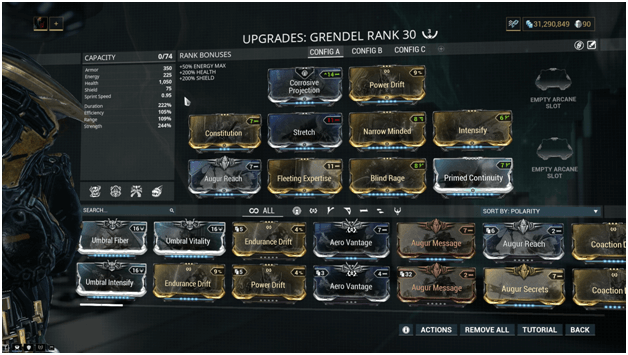 This build allows Grendel to cast his abilities with a good deal of ability strength and duration which gives prolonged and stronger effects.

Nourish can last longer and can benefit the team well when used while his other abilities can deal a good amount of damage with the increased ability strength.

This build works well for those who wish to use his skills more often for buffing or dealing damage during certain situations. 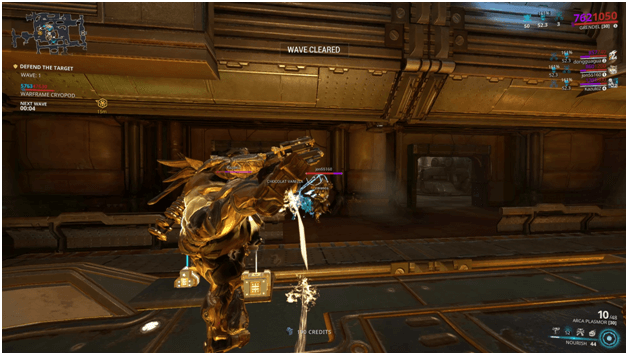 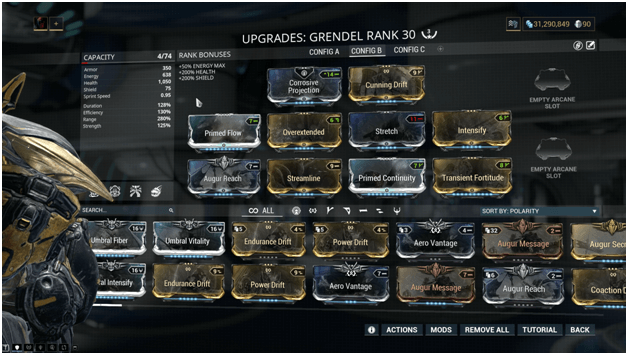 The Crowd Control build is meant for Grendel to utilize his abilities with a large increase in range and a slight increase in his other ability stats.

His abilities will cover a larger range allowing him to use Feast to grab enemies from a greater distance.

Nourish will have a large radius as well to reach allies to give a small but useful buff when used for team play.

Regurgitate will be affect a large area, knocked enemies in a large area down to assist with crowd control while his Pulverize ability gains a sphere around it that represents the large area that it will knock enemies down in.

This build is meant for affecting enemies with Grendel’s offensive skills with a much larger range than usual. 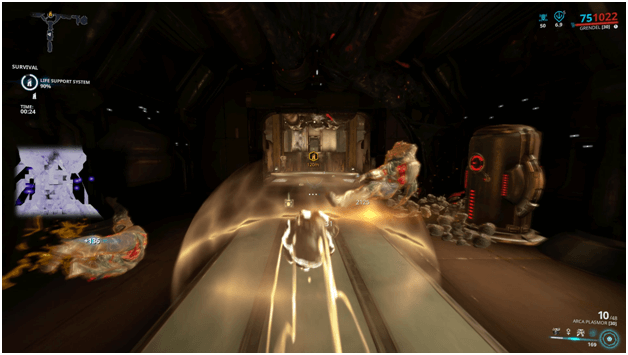 (Grendel knocking enemies around with the Pulverize ability) 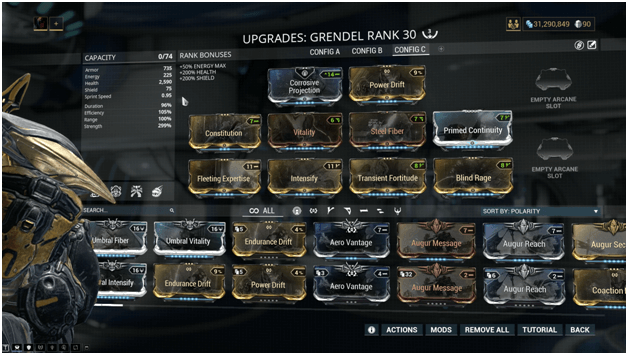 Grendel will be able to use his buff which will last a reduced but still useful amount of time with superiorly increased effects.

Damage done with his abilities will be increased to almost 3x more the original damage which makes it good for dealing large amounts of damage during certain situations.

This build is useful for fighting enemies along with using Grendel’s skills to maximize his damage output. 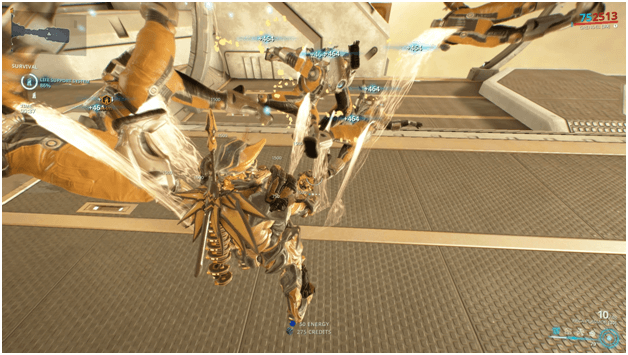 (Grendel spitting out several enemies, killing all of them in the process) 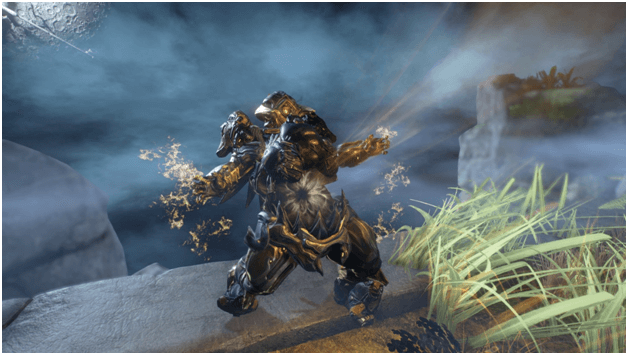 Grendel is indeed very durable and can withstand a lot of damage which makes him a good addition to any team.

Since he can us Feast to temporarily hold, damage and later on release enemies to later be affected by toxin status effect, this gives the team the chance to deal with other enemies and later on take down those that Grendel held on to.

He can be used as an all around Warframe since he can be a tank, buff his allies as support, deal a lot of damage as a nuke and more depending on how you wish to use him.

Overall, he is one of the fattest Warframes around not just physically fat but he also has a large amount of health and along with his armor, you can expect him to shrug off a ton of damage like it was nothing.